The lineups are out and to no one's surprise, Jurgen Klinsmann has gone with his choice first eleven.

Share All sharing options for: United States vs. Azerbaijan: Lineups and Live Thread

But the formation could also be another poorly kept secret as the United States will debut a diamond midfield with Bradley in front of Jones in the center of the midfield. Clint Dempsey was a late scratch with a groin injury. Chris Wondolowski replaced him and he will partner with Altidore up front and Bedoya and Zusi will be along the wings. 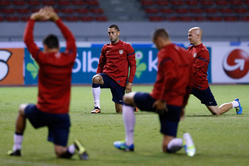 Check out Jake's preview for tonight's game and join the live thread below.

Arguably, these are the best eleven players the US has on the roster, so getting them all into a starting lineup in a formation that works is critical for Klinsmann. Do I think Kyle Beckerman is a better holding midfielder than Jones, yes, especially if Jones doesn't stay at home as the true number six in this formation. Bedoya and Zusi on the wings should have plenty of room to operate with Jozy and Dempsey occupying defenders in the middle of the field. Expect Dempsey to drop back occasionally too, giving the US almost a 4-1-4-1 look with Dempsey and Bradley as the center midfielders.

Defensively both Beasley and Johnson will have free reign getting forward in all likelihood. The attacking fullbacks are a weapon for the US and even though I think Fabian's the best left midfielder on the roster, he can have a tremendous impact from the right back spot. Besler and Cameron appear to the center back pairing of choice and this will be their second game according to ESPN's Paul Carr, the other being a 2-0 win at home in qualifying last year.

That leaves basically everyone else on the bench. I expect to see a few changes defensively with Omar Gonzalez playing center back, Timmy Chandler at right back and even a switch for Johnson to the left. Beckerman for Jones seems a lock at some point, possibly at halftime and maybe even both Aron Johannsson and Chris Wondolowski for Jozy and Dempsey as well. Julian Green for Bedoya or Zusi also wouldn't be a bad idea. I don't think there will be an opportunity to get DeAndre Yedlin or John Brooks into the game defensively with Klinsmann tinkering around.

Coverage begins on 10PM EST on ESPN2 following Sporting KC-NY Red Bulls and join the live thread in the comments section below.