Jurgen Klinsmann is putting together his starting lineup for the World Cup next month, so he asked his special advisor Berti Vogts to set up a friendly with the national team that Vogts coaches, Azerbaijan.

Ok, let's begin with a few basics. Azerbaijan is a former Soviet Republic that gained independence in 1991 and played it's first international game in 1992. It has never qualified for a World Cup or the European Championships nor has it ever really come all that close to doing so. And they're probably more famous for being the jersey sponsor for Atletico Madrid than they are for anything they've done on the field.

But that doesn't mean this won't be a test for the United States. They have a starting lineup that is a work in progress defensively and out wide on the wings and Azerbaijan is a fairly stout defensive team. And they have had a few solid performances in recent years, tying Belgium 1-1 and beating Turkey 1-0 at home in Euro 2012 qualifying and a 1W-3L-6D (9pts) record in World Cup qualifying that included a 1-1 draw at home vs. Russia. They only scored seven goals in World Cup qualifying but only allowed 11 and five of those came against Portugal in two games (3-0 and 2-0 wins for Cristiano Ronaldo and company).

So at the very least the 23-man Azerbaijan squad that features only 5 non-domestic players (brush up on your Azerbaijan Premier League teams) and only six players older than 25 could prove tough to break down. And while Klinsmann will likely opt to trot out perhaps his first team, he will plan on using all of his subs to give minutes to as many players as possible per ESPN's Jeffery Carlisle on Twitter.

Part of me wants Klinsmann to trot out his youngest lineup possible, something like Guzan; Chandler, Gonzalez, Brooks, Yedlin; Green, Bedoya, Diskerud, Zusi; Altidore, Johanssonn in a 4-4-2. But that's the cynic in me wanting Klinsmann to give his younger players experience and is probably just not practical.

So instead there will probably be a first choice of Howard; Beasley, Besler, Cameron, F. Johnson; J. Jones, Bradley; Bedoya, Dempsey, Zusi; Altidore in Klinsmann's preferred 4-2-3-1. This is a pretty good starting lineup, and a starting XI that can absolutely make some noise in the Group of Death. But as I stated in my really long winded column yesterday, it's the lack of experience in the rest of the backline that worries me.

Expectations Unchanged for USMNT in Brazil 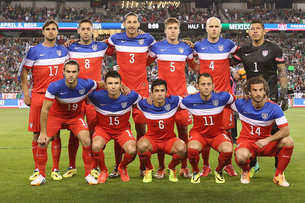 Not everyone is happy with Jurgen Klinsmann's roster selection for the 2014 World Cup, but the goal as always for the USA is to get out of the group. Failure to do that will put higher expectations on the team in 2018.

Klinsmann didn't include anyone who played significant time at right back in qualifying other than Timmy Chandler, whose lone appearance vs. Honduras brings back so many good memories, to his final World Cup roster. And since he thinks Geoff Cameron's best position is in the center, that forces probably his best left back and left midfielder in Fabian Johnson into the start right back position. It also leaves Timmy Chandler as the reserve left back which is another problem (can Brad Davis' left foot play left back?) but we'll leave that for another time.

I would expect to see most of the substitutions in the attacking half of the formation. Julian Green for Alejandro Bedoya, Mix Diskerud for Graham Zusi and Chris Wondolowski or Aron Johannsson for Jozy Altidore and Clint Dempsey. I'd love to see more of Kyle Beckerman with Michael Bradley in the holding midfield pairing, especially since that allows Bradley to go forward more and be Michael Bradley.

Tactically I don't expect much to change for the USMNT, this is about building a lot of chemistry very quickly. I'd like to see a halftime switch on defense, where Omar Gonzalez comes on for DaMarcus Beasley and the USA shifts to a backline from left-to-right of F. Johnson, Gonzalez, Besler, Cameron to see if the center back pairing that got the US through qualifying can still work. I also want see Beasley staying at left back and taking Bedoya off for Gonzalez and letting Fabian Johnson operate on the left side of midfield too, which I think is his best position with the USMNT. But with the Klinsmann light on good defenders, I think it's safe to say that Fabian Johnson will be spending most of his time in Brazil in defense.

Another wrinkle for this game is that Azerbaijan is coached by US special consultant Berti Vogts, who has been the Azerbaijan coach since 2008. A former West Germany coach of Klinsmann's, Vogts detailed his job with the USMNT to MLSSoccer.com and will also be scouting the USA's World Cup opponents in their upcoming friendlies. And since I'm sure Vogts has seen something in practice with the USA, he'll have a nice detailed scouting report of the Americans to pass along his players.

As far as notable players for Azerbaijan, there are three that stand out for me on the roster. The first is M/D Ruslan Abishov who plys his trade in Russia with FC Rubin Kazan who were back-to-back Russian Premier League champions in 2008-9. While he only has one appearance for the club, it's still shows the talent that Azerbaijan have at least in Eastern Europe. The second is Rashad Sadygov who has 95 international caps at the age of 31. Finally, up front is Vagif Javadov who has 51 caps and 9 goals internationally.

Kickoff from San Francisco will be at 10PM EST on ESPN2.