The New England Revolution put some space between themselves and the rest of the Eastern Conference with a 2-1 win over D.C. United on Saturday night. On a rain-soaked evening, both teams slugged it out, but it was the Revs who came out on top.

There is a juggernaut forming in Foxboro. The New England Revolution kept their run going, making it five straight victories and seven matches unbeaten as they topped D.C. United 2-1 at Gillette Stadium under the pouring rain. Patrick Mullins and Diego Fagundez provided the scoring fireworks for the Revs, sandwiching a Fabian Espindola goal.

With this win, the Revs have made it five consecutive league victories, their longest winning streak since a six-match run in 2005. Patrick Mullins became just the second rookie in MLS history to score in four straight matches, after Damani Ralph. And, unfortunately, New England's home shutout streak came to an end when Espindola buried his 73rd-minute goal, finishing at 433 minutes, though their 2014 record at home remains free of defeat. Jose Goncalves also made his first appearance since injuring his quadriceps against Houston on April 12th. 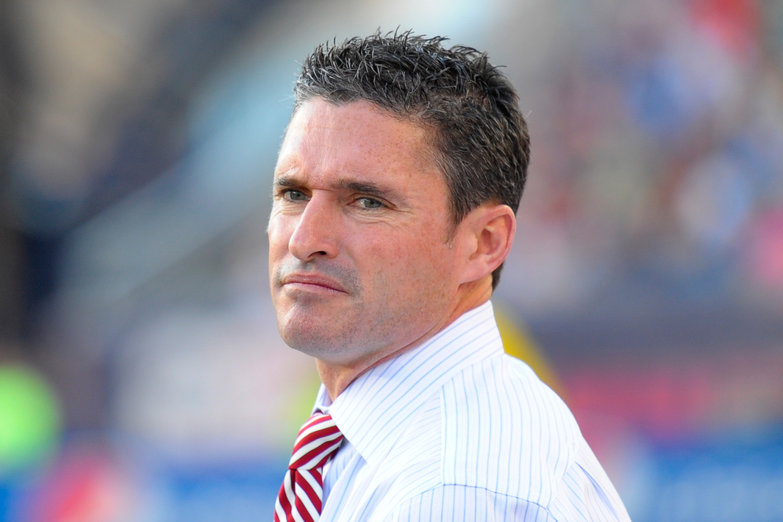 Keep it parked here for all coverage related to the match against D.C. United

"I thought it was a good, hard-fought match all the way around," said Jay Heaps after the match. "I knew they came in with an excellent game plan, I thought Benny's tactics were spot on. We knew we weren't going to be given anything, we had to go take it. I think that's what I'm taking away from the game, that we went out and found a way, and that's what I'm most proud about."

The first half was a bit ugly, with no more than half-chances shared by both sides. A pair of Nick Deleon strikes from distance bookended the Revs' best chance of the half, when Lee Nguyen chipped Mullins into the box, and though the rookie's effort was blocked, it found Teal Bunbury in the six-yard box. Unfortunately for Bunbury, it was behind him, and his fall-away effort was skied high.

D.C. nearly took the lead in the 28th minute through a rare mistake by Andy Dorman. The midfielder's errant pass was intercepted by Deleon, who dribbled toward goal in a two-on-one with Eddie Johnson. Deleon tried his luck just inside the box but had his effort tackled away excellently by A.J. Soares. The ensuing throw-in resulted in a cross to a downward header from Johnson toward the far post that Bobby Shuttleworth saved.

The end of the first half is when the rivalry-esque chippiness began. In the 39th minute, Chris Korb crushed Chris Tierney off the ball, and after playing advantage, referee Juan Guzman showed Korb a yellow card. Then, just three minutes later, Perry Kitchen also saw yellow for throwing Andrew Farrell to the ground as the latter was shepherding a ball out for a goal kick.

"Sometimes, these games, they get a little chippy," said Mullins of the physical play. "I think our team showed great character, just guys making plays all over the place."

The goalscoring happened in the second half, beginning in the 55th minute with the two hottest players in navy blue these days: Mullins and Fagundez. Diego received the ball outside the box on the left flank and skipped inside, taking on the defense, before spying a gap in the back line. It parted like the Red Sea and Fagundez surged through with a tremendous burst of acceleration, but found himself dispossessed just as he was about to have a shot. Mullins, however, lurked nearby, and after picking up the ball just outside the six he made a nifty little shoulder fake and cut into the six before finishing past Bill Hamid from close range.

United hit back in the 73rd minute through substitute Fabian Espindola. Cristian sent in a low cross from the left that squirted to Espindola near the penalty spot. The Argentine took a touch and fired dead center and low, somehow fooling Shuttleworth into falling in a different direction and letting the ball through his legs.

It wouldn't be long before the Revs restored their lead, again through the understanding of that dangerous front three. Bunbury got free down the right and drilled in a low cross, possibly looking for Mullins who was charging the near post. It was ahead of the rookie, but after it passed him, Hamid could only get a slight touch on the ball before it reached Fagundez all alone at the far post, and the teenager lashed it home for his fourth goal in three matches.

If the first half got chippy late, the second half was a down-and-out streetfight. Bunbury saw yellow in the 64th minute for absolutely destroying Cristian with a shoulder charge, perhaps expecting the left-back to move in a different direction and instead laying a hit that wouldn't have been out of place in the 1970's Oakland Raiders' secondary. Yellows were shown to Fagundez and United's Davy Arnaud in the 67th minute after Fagundez appeared to be playing a little gamesmanship standing over the ball, and Arnaud decided to blatantly shove him to the ground.

The real show was in the 82nd minute, however. On a play that seemed fairly innocuous, Juan Guzman saw something in Eddie Johnson that he didn't like and showed the struggling forward a straight red card for kicking out at Kelyn Rowe. Upon replay, he definitely made the motion, but it also seemed like a harsh call in the end. Nevertheless, MLS referees have been fairly definitive in their efforts to stamp that sort of behavior out of the game, and this call does line up with that philosophy.

"You can win games in different ways, and I think we've shown a couple different varieties of ways," said Heaps. "But in terms of tonight, an Eastern Conference game, when it starts to rain, and get a goal and give up a goal, where are the tough guys who are going to step up? And I think our guys did really well tonight."

Steve Neumann had the last exciting action of the match. In the 89th minute, Cristian had a nearly-free diving header from a corner kick and it looked destined for the back of the net. Heroically, Neumann found himself on the post to Shuttleworth's right and was able to block the header off the line.

The Revolution will be back in action next Saturday night against Montreal in Canada.