Tomorrow Clint Dempsey will play at Gillette Stadium for the first time since 2006 and the for the first time not as a member of the Revolution. And while Dempsey's three year stretch in New England kick-started his soccer career, most of his career highlights happened after he left.

I am not going to say that Clint Dempsey isn't an all-time Revolution player. Because he is. In three seasons (2004-06) after being drafted 8th overall in the 2004 MLS SuperDraft Dempsey played in 71 games and scored 25 goals in navy blue and was rookie of the year in 2004 and MLS First XI 2006.

But that was ten years ago, and Clint Dempsey has been away from New England for a very long time. By the time he was playing for the United States and scoring in the 2006 World Cup in Germany, Dempsey was already a member of Fulham in the EPL.

Even though I can go and find highlights of mop-topped Dempsey online scoring diving headers, trying "stuff" and jumping into The Fort at Gillette Stadium, I think Dempsey is almost the forgotten man of the vaunted Steve Nicol era in New England. That's not a knock on Dempsey, in fact, it's absolutely a knock on my MLS watching habits back in high school. It's not that I missed Dempsey's time in New England it's that he came during the middle of a really great stretch for the Revs, was sold to Fulham, and became a legend with the US national team.

As most Revolution fans know, from 2002-2007 New England went on a playoff streak that included 4 MLS Cup Finals but no victories. Players like Matt Reis, Steve Ralston, Taylor Twellman and Shalrie Joseph were all regulars during that run and Dempsey was a big part of that success. 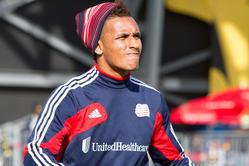 Former Revolution striker Juan Agudelo work permit in England has been denied again, leaving the young playmaker's club career in jeopardy. Seth details his options, including a possible comeback to MLS and the Revs

But he also was only there for half of that magical run, being drafted in 2004 and sold to Fulham in the off-season of 2006-7. Despite the consistency of winning and advancing in the playoffs, New England's two major trophies were won without Dempsey: the 2007 U.S. Open Cup and the 2008 CONCACAF SuperLiga. That's not to say that the Dempsey didn't make the Revs better, clearly he did, but the Revs were already pretty good and adding a player of his skill set just made them better.

When Dempsey moved off to Fulham it wasn't a shock. I wasn't as big of an MLS follower as I am now, but I remember being pretty excited that a Revolution player was going to be the highest paid American in the EPL, earning a reported $2 million in his initial deal with Fulham. And it wouldn't take long for Dempsey to shake his status as a former MLS player and evolve into just being an United States international and making regular appearances on EPL scoresheets.

When I think of Dempsey, it's hard to think of him as a Revolution player first. He's a hero at Fulham, a goal in a 1-0 win at Liverpool in 2007 kept Fulham in the EPL, he was the clubs' leading scorer in 2007-8 as the Cottagers again avoided relegation. But the penultimate club highlight for Clint Dempsey: 2009-10 Europa League Round of 16 vs. Juventus.

I can not remember the number of times I have seen this goal and every time it is just awesome. That goal put Fulham through on aggregate and they would eventually lead to appearance in the Europa League finals vs. Athletico Madrid, a game in which Dempsey came off the bench in the second half in a 1-2 extra time loss for Fulham. That appearance is the first by an American in a major European final.

It's highlights like that at the club level that make it difficult for me think as Dempsey as a Revolution player. Yes, he started his career here but his best success came after he left New England and had great success. But when you think of Dempsey at the club level, wouldn't one of the first things that you would think of be he's the all-time leading American goal scorer in the EPL? And that doesn't even count his international career with the United States Men's National Team.

There's too many highlights to go through all of Dempsey's international career, but the 2009 Confederations Cup, scoring in the 2010 World Cup because of Rob Green's howler, Deuce Face are all on the long list of great moments in his storied USMNT career. It's his international career that really sets Dempsey over the top for me and is the biggest reason why it's difficult for me to think of him as a Rev first. And this is before his return to MLS with the Seattle Sounders.

Know Thy Enemy: Revs vs. Sounders 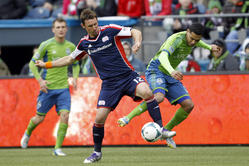 Corey asks three questions with Sounder at Heart's Dave Clark about Seattle's recent winning streak, Dempsey on a tear and maybe a weakness in Seattle's defense.

Because that mop-top youngster left New England, grew up and became a legend. And yes, Dempsey has only nice things to say about the Revolution and the organization as a whole, including this nice Seattle Times blog post. And I'm sure that it's going to be a nice moment for Clint coming back to Gillette, to where it all began for him ten years ago as a professional. But he's accomplished so much since leaving New England and MLS I'm sure there are a lot of casual fans who probably didn't know Dempsey started out in MLS with the Revs.

As great as he was a Revolution player, I rarely think of him and his time in New England. Had the Revs won an MLS Cup or two during that stretch it might be different but all of America watch Dempsey grow up to be an international superstar in England, not New England. And with his return to Seattle, it's harder for me as a fan to call Dempsey one of our own. His career since leaving the Revs, spending the years of his prime in the greatest league in the world and playing against the best.

Because he's Captain America, the creator of the Deuce Face, the guy who's know to try stuff whenever he wants, a Cottager folk hero and then somewhere down the line there's that rookie running around Gillette with hair scoring trademark diving headers and jumping into The Fort. Clint Dempsey isn't a legend because he played in New England, he's a legend because every soccer fan knows of his exploits in the EPL and with the USMNT. Only MLS diehards and Revs fans will harken back to the days of Deuce's exploits on the turf in Gillette.

I don't think I'm the only one who thinks this in New England, and I'm probably in the minority which is okay. I'm not telling anyone to not love the time Dempsey was here wearing navy blue. Maybe I moved on, or caught on too late, and I will still clap from my couch as Dempsey is introduced onto the field tomorrow. Not just to honor a former Revolution player, but to applaud a current national team legend who will go down as one of the all time greats in American soccer history.

Dempsey will always be a member of the Revolution, his three years playing here during the one of the best stretches in team history are etched into the record books. But Dempsey has outgrown his former-Revolution player status, and I can't call him "one of our own" anymore.

He's America's own Clint Dempsey. And he started his professional career in New England.