Revs 2, SKC 0 - Player Ratings and Man of the Match

Three points usually means high ratings across the board, and after a solid team performance with two late goals, Nick, Jake and Corey having their ratings from last week.

Share All sharing options for: Revs 2, SKC 0 - Player Ratings and Man of the Match

Nick: Another shutout, another quiet day. Made a difficult near-post save and stood strong in traffic, but seemed to have difficulty communicating with his wall. Jake: Had one really impressive save when his defense was completely out of shape but otherwise was the beneficiary of bad SKC shooting like Benny Feilhaber from close range. Showing improvement from a rough start to the year. Corey: Made a crucial save that could have otherwise changed the game.

Nick: Much improved match for the wing back. Benefited from better service and tidy, composed defending. Jake: Good two-way game had often times had lots of room to operate but didn't see enough of the ball. Corey: Had excellent service on the night and looked improved going forward. Defensively pretty good, but not great.

Nick: Played like a rock in front of Bobby. Smart clearances, fearless defending and strong play in the air helped keep a clean sheet. Jake: Quietly consistent on the defensive end and even had had a pretty solid day passing even if he still struggles going forward. Corey: A leader on the backline. He is stepping up in a big way with Goncalves out injured.

Nick: He played aggressive and took several risks, yet he cleaned up every dangerous opportunity. Versatility has proved invaluable thus far. Jake: Fine defensively but his distribution was awful, 25/41 (61%) on the day. His aggressiveness going forward even from the center was good to see though. Corey: Again impressive at center back. Had a couple iffy moments, but was dominant on the whole. 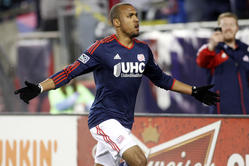 The Revs scored twice in stoppage time as they defeated Sporting KC 2-0 on Saturday, Seth recaps the late flurry of action.

Nick: Joined the attack with pace and created a few skilled opportunities. At times, he struggled to keep with SKC's wide attackers, though he recovered well from start to finish. Jake: How great has Barnes been this year? Solid defensively, joined the attack and his run to the near post gave Bunbury space to bungle home the winner. Just amazing what he's done in a backup role this year. Corey: Putting in yet another solid shift at right back. I, for one, am so glad the Revs brought him back for 2014.

Nick: A few confusing passes serve as the only dark spot on an otherwise brilliant performance. Played physical and smart, and covered an unbelievable amount of ground in the middle. Jake: Still proving a solid option in the holding midfield spot but I'd like Dorman to try and get forward a little more, most of his passing came in the midfield third. Corey: Excellent yet again. Dorman is a real leader and is quietly having an amazing season.

Nick: Seemed to disappear at times, but benefited from a creative engine that kept on working. Game-winning assist created havoc for Kronberg. Jake: Frustrating that he can't have the same impact in the final 5 minutes throughout the game, but those 5 minutes, and drawing the red card, looked like 2013 Diego. Game winning assist, drew the PK and wanted to take it but was shot down, rightly so, by Jay Heaps. Corey: Took him 90+ minutes to really get involved, but boy am I glad he finally did.

Nick: Creative build-up made Daigo a threat throughout. Occasionally overlooked a final pass that would have created danger for Sporting's back line. Jake: Good shift, nothing spectacular but didn't get enough of the ball, especially in the final third, to have a serious impact on the game. Corey: Quiet game, but another solid shift. Still, this team is sorely missing Kelyn Rowe.

Nick: Gritty, creative build-up and assertive defending led way to another exceptional match. He never, ever slows down. Composed penalty sealed the deal. Jake: He just does it all, he's everywhere. Arguably one of the most underrated players in the league at this point. Corey:

Nick: Located another gear on Sunday, and found himself on the end of numerous goal-scoring opportunities. Right-place right-time game-winner highlighted an inspired performance. Jake: Looked so much more comfortable on the wing, but my favorite play from him wasn't the goal, but tracking back 60 yards for a defensive stop. Corey: Hugely influential for the entire game. He and Dorman showed great control and composure in the middle of the park and were able to dictate tempo for long stretches. Great pressure on defense as well.

Nick: One point for 15 minutes of hard work, zero points for everything else. Unenthused, uninspired performance for a man who desperately needs to find his game. Is he trying not to score? Jake: Didn't get involved enough in the game and was rightly called out by Jay Heaps at halftime and then subbed fairly early in the second half. Still puts shots off target that defy physics. Corey: Back to his usual trying-not-to-score ways.

Nick: Made strong runs and pushed hard against SKC's back line, but had all-to-few opportunities to make a difference. Jake: Had nearly the same amount of touches as Jerry in half the time, so clearly was twice as effective. Corey: Didn't get to see much of the ball, but made really smart runs during his shift and was able to use his speed to keep SKC's defense stretched.

Nick: Seems to have located the physical side he so desperately needs to excel. Recovered well after overrunning the play late in the second half. Jake: Pretty good shift off the bench, seemed pretty comfortable in a more advanced role. Corey: Had amazing energy coming off the bench. Just what the doctor ordered.

Nick: In limited minutes, the rook looked cool and confident, and added calm and creative build up out of the middle. Very impressed. Jake: Like Davies, Neumann needs to get more time on the pitch, clearly can make an impact if given more minutes. Corey: In his short shift, Neumann was everywhere and constantly getting himself involved. Was intercepting passes left and right, tracking back defensively, and playing smart, possession soccer. I'm jonesing to see more of this guy.