The 3rd Yellow - How Did Lewis Neal and Andy Dorman Not See Red?

Did Jorge Gonzalez forget his red card at RFK stadium? Certainly looks like it, he had three chances to send a player off including twice to DC United's Lewis Neal in just the first half alone.

Share All sharing options for: The 3rd Yellow - How Did Lewis Neal and Andy Dorman Not See Red?

I will freely admit that at first glance, I didn't have that much of an issue with D.C. United's Lewis Neal's tackle just over three minutes into the game. It was a bad challenge that caught New England Revolution right back Andrew Farrell on the ankle and Neal was cautioned.

But on closer inspection, Paul Mariner is right, that is a "sending off." And the MLS Disciplinary Committee agreed, handing Neal a one-game suspension yesterday. 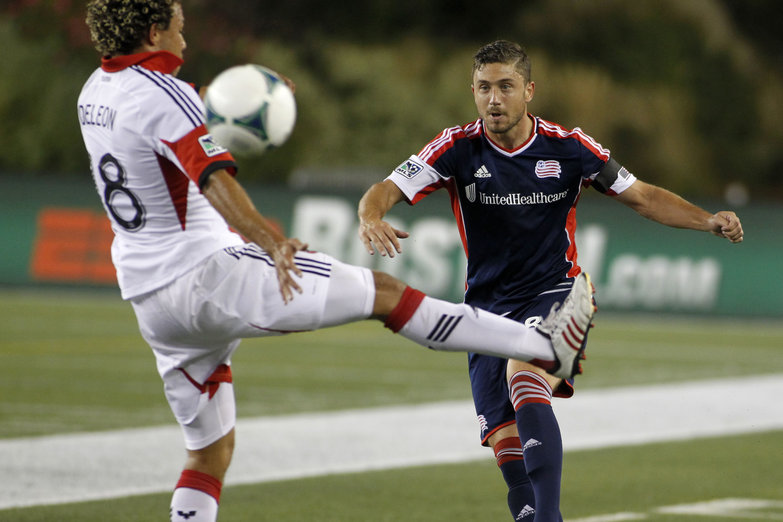 The one-stop shop for all pre- and post-match coverage for NE vs. DC.

Neal comes in with a challenge with his left leg, which gives him very little chance of succeeding in the tackle as he goes through studs up on Andrew Farrell's ankle. But it's not where Neal's leg ends up, and I'll explain the phrase "above the ball" in a little bit, but it's the motion and where it starts that would invoke the phrase "endangering the safety of your opponent."

Neal's leg is coming down onto the ball, which misses and catches Farrell's leg. We've seen an increasing number of these tackles punished with red cards this year and Neal should have also been dismissed for that challenge. Again, at game speed I thought the challenge was just more awkward than anything but looking back, that's what makes it dangerous.

Good challenges always take place along the ground, or "ball hieght," for a variety of reasons but most importantly safety of all the players. The reason you see a cautions and ejections for studs up challenges is because they're dangerous, but it also promotes better decision making and tackling.

Lewis Neal exhibits neither of these two traits in this challenge. It's a bad decision to come in with the left leg because that's where Farrell is in relation to the ball. Had Neal challenged with his right leg, he would have been in a better position to win or block the ball. His actual tackle is poor from a technical standpoint, as he stabs in with his leg in a strange, slightly downward motion. That combination of studs showing and downward motion has been widely shown a red card early in the 2014 MLS season, so why not there?

That's Simon Borg's Instant Replay segment from last week. Notice the challenges by Uri Rosell red card (2:00 mark) and Pa Modou Kah (5:35), both players have studs their studs up. Rosell however is making that downward, almost stamping motion in his challnge and saw red. Kah's challenge was studs up but like Neal wasn't terribly above "ball hieght" and only saw yellow (his challenge last week against Dallas however should be the definition of an "above the ball" challenge").

What I mean by "above the ball" is sort of the benchmark for referees as far as whether a play should automatically be a red card. Basically if you're studs are showing and your foot is anywhere near where Kah's was in that challenge in the Dallas game, it should be a red card. Neal's challenge might not qualify as "above the ball" as far as where he made contact with Farrell, but it's the downward motion that should have sent him off.

Also, yes Mr. David Horst (7:30 mark), that is a scissor tackle and a straight red. You will be suspended for the Houston Dynamo-Revs game this weekend.

Basically this is a consistency issue. If MLS referees are going to consistently give red cards for these downward motion, almost "stamping" tackles (and they should), then it needs to issue them for every challenge and the MLS DC should be issuing multiple suspensions weekly. It shouldn't take long to get rid of these types of tackles not just because they're dangerous but they're just to poor from a technical standpoint. If you make bad decisions coupled with poor tackling, you should see more red cards.

Go back and see last week's Instant Replay as well. There's a few more examples of these types of challenges and surprisingly, only Lewis Neal is going to get a retroactive suspension from last week. And there probably should be more (looking at you Pa Modoh Kah), you know, to promote that consistency of player safety that the league wants in all it's games.

I will give center referee Jorge Gonzalez some credit on his consistency because both Neal and Andy Dorman each committed a foul on a yellow card that was worthy of the second caution. Neal in the 38th minute (:30 second mark) by going studs up into Farrell again and Dorman in the 76th minute (:45 seconds) for arguably his second tactical/professional foul of the evening. Had Dorman been shown a second caution with Neal still on the field, I'm not sure I could have restrained myself in this column. To have Lewis Neal still on the field and the Revs down to 10 men would've been shocking, especially since Neal could've sneezed on someone after the second challenge on Farrell and could've been booked for it.

One more issue of note is the Charlie Davies "dive" at the 1:00 minute mark of Borg's video. I've never liked the word "dive" because it's used too often to cover two specific scenarios. There is simulation, a deliberate act to draw the referee into calling a foul and embellishment, an exaggeration of contact or a foul.

I'm not sure Charlie Davies does either here. Whether he stepped on the foot of the DC defender or was tripped up doesn't matter, I think there is contact and Davies goes down. The Revs still have possession of the ball and I think a no-call or a play-on would have sufficed here. You can argue that Davies embellished the contact, and that's fine, you certainly can, I can't tell you that your wrong. Davies, like a lot of players, goes stiff as a board and sort of flings himself forward and that rarely looks natural. But as far as embellishments or simulations go, there are far more egregious ones that go unpunished by referees and the MLS Disciplinary Committee and we'll have to chalk this one up to Davies reputation in MLS that he largely got while playing in DC a few years ago.

Also, I'm not sure what Revs head coach Jay Heaps said on the sideline to get ejected from the technical area, but he'll be suspended for this weekend's game vs. Houston. He said he was a little too "emotional" at the end of the game and I can only assume that he said any number of magic words within earshot of the 4th official.

So how did Neal and Dorman manage to not get themselves sent off in this game? I honestly don't know. Even if you make a good argument that Neal's challenge three minutes in on Farrell isn't a red (and it being three minutes into the game is not a defense, a red card is a red card), his second challenge a half hour later is absolutely a second caution no matter what. Dorman's perhaps a little bit crafty on his second foul. There is no reverse angle but if he had seen a second yellow there'd have been no complaints for me. That foul could have been a caution on its own, without taking into account whether or not it may have been tactical or professional in nature.

But somehow this game finished 11-versus-11 and the way the Revs were playing I doubt that even with a man advantage for almost the entire game the Revs would have scored a goal. But I would have loved to have seen Twitter explode had the Revs drawn 0-0 or lost with an 87-minute man advantage. And I blame Gonzalez for robbing me of that potential moment of epic vitriol from Revs-land.