Revolution vs. Earthquakes 2014: Player Ratings and Man of the Match

The Revolution earned their first goals and first victory of the season on Saturday night in San Jose. Here's a look at how we feel everyone performed on the evening.

Share All sharing options for: Revolution vs. Earthquakes 2014: Player Ratings and Man of the Match

Steve: A win's a win, but that goal looked real soft...Corey: Could have had a shutout but seemed to have a mental lapse leading to Wondo's goal. Still looking for more from Bobby...Nick: Sometimes he looks comfortable and in command, others he looks sheepish and lost. Needed to make himself bigger and redirect Wondo's equalizer.

Steve: Passing needs to get much better. Struggled to handle speed on the flanks...Corey: Nothing spectacular on the attack, and Cato was a tough match-up for him all night...Nick: One of Heaps' steady defenders struggled yet again. Could not keep up with Cato on the left side, and took a poor angle on the eventual equalizer. 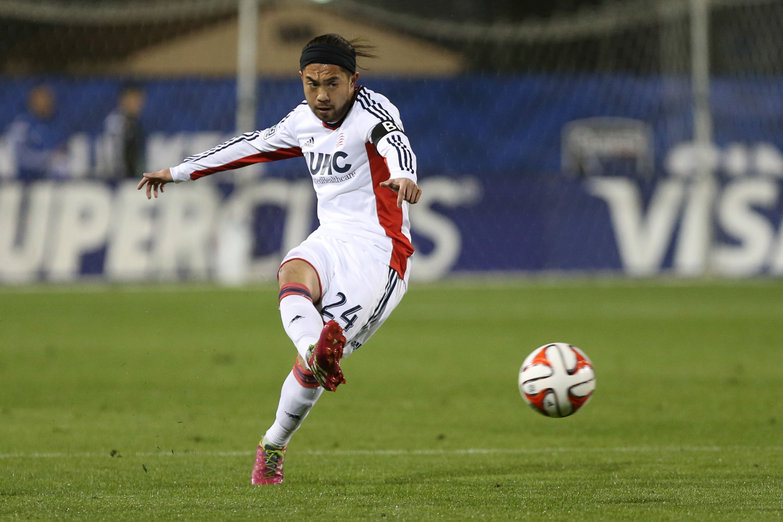 Steve: He made 17 clearances, and passed well. Strong showing...Corey: Amazing what a difference a settled contract dispute makes...Nick: Tough, gritty defending throughout, but needed a tidier clearance on the equalizer. Made it too easy for San Jose's premier goalscorer.

Steve: Not on the Soares bandwagon. 50% passing and routinely gave up chances by losing his mark and allowing runs in behind. Needs to focus more on marking and less on asking for an offside call...Corey: Handled Lenhart pretty well. He's been pretty consistent so far this season; knows his role...Nick: Another consistent, reliable performance in the middle. Stood strong during several dangerous moments.

Steve: Had a game out there. Pretty good passing, quality speed defense...Corey: In beast mode for a second straight game. Farrell is on fire now that he's returned to right back. Let's hope he can keep it up...Nick: Just blown away by his athleticism. Won every 50/50 ball and defended with his signature strength and speed.

Steve: He's killing it out there. Good D, careful passing, instincts to get forward, and needed leadership...Corey: Another excellent shift. The difference has been night and day with Dorman as the defensive midfielder. Had some significant help from Daigo and Lee, too, though...Nick: Has fully returned to late-2013 form. Took up a massive amount of space in the middle, and pushed forward with pace when needed. Clean, consistent performance.

Steve: Another guy who passed cleanly, but still needs to contribute a little more to the attack...Corey: He stepped in admirably for the injured Rowe and had a good two-way performance. He seems to be getting more comfortable with his teammates...Nick: Mirrored Nguyen's work rate in the first 45, but resorted to sloppy tackles and poor passing as his shift pressed on. Overall strong performance.

Steve: Scored the goal, had another shot on target, and put in 90% passing accuracy while making defensive impacts, too. Complete performance from Lee...Corey: You automatically get at least an 8 when you score a game-winner in extra time on the road. Nguyen, who is very much coming into his own as a leader on this team, had a superb game against San Jose. Facilitated many attacks; just what the doctor ordered...Nick: His engine never stops. Despite slowing in the later stages, Nguyen fought, and fought and fought, earning every touch of the game-winner.

Steve: Not meeting expectations, but still 81% passing and a shot on target. Dispossessed far too often (6 times, plus 6 errant passes), though...Corey: Doing his disappearing act from 2013. Diego needs to find a way to be more active during the run of play. It'd be nice to get him on the right side of the pitch more, where he seems more dynamic...Nick: Clever "assist" on the own goal served as a lone highlight. Disappeared for long stretches, took inadvertent touches and failed to impact the attack with his usual creativity.

Steve: Need to see more. Tidier passing, needs to keep the ball better, and should have scored...Corey: A strong performance from Sene who is coming closer and closer to full fitness. Hasn't been very dangerous on the attack yet this season, but he's at least been involved and it seems as though the goals will start coming soon. Great understanding of his defensive responsibilities out on the wing...Nick: Strong and tough over the ball, and always seemed to find space in a dangerous spot. Just a match or two away from full fitness.

Steve: An improved performance, but still need more from him. Not quite dangerous enough...Corey: I thought he played better in this match than any of his previous this season, but I'm still not totally convinced he's the best option up top. That said, he was much more involved against San Jose. Now he just needs to be a bit more selfish and find some confidence when shooting on goal...Nick: Heaps has been patient, and his methods are slowly paying off. Bunbury looked more comfortable (and much more patient) in hold-up play than in any of his previous three matches. On the doorstep of his first goal.

Steve: He was instantly dangerous in all facets of the game. Good running, worked well with Teal. Oh, and took the quick kick that lead to the goal...Corey: Really liked what I saw from Davies, who looked fit and rearing to make an impact and a good impression. More please...Nick: Did a lot of running for a few short touches, but added an extra dimension to the Revs attack. Heads-up restart led to the game-winner.

Steve: Pass to Lee on the break showed great vision. There's a place in this team for Scotty...Corey: Made a really positive impact and maybe has found a more suitable role for himself, at least for the time being, as an influential second-half sub...Nick: Displayed the physicality we've been so eagerly waiting for, showcasing a defensive command of the middle. His presence will be needed off the bench.