The Revolution unveiled their new 2014 home kit on Tuesday night at Royale in Boston. They're sporting a sleek, simple navy design with interesting accents and highlights.

Tuesday night at Royale in Boston featured something of a fashion show as the New England Revolution revealed their 2014 home kit. It is less busy than the home kit of the previous two seasons, and while the 2012 and 2013 designs were pretty good, this one is beginning to grow on me.

"We’re very pleased with this design and are excited to begin wearing it," Revolution president Brian Bilello said. "We worked with adidas to integrate some key design elements into the kit that are important to our club. For a long time, our primary kit has been solid navy, with only lesser red and white accents. We wanted this primary uniform to reinforce the region’s Revolutionary identity by having a greater balance of red, white and blue.

"The Flag of New England is also a key icon for our club, one which our supporters have been instrumental in growing. Unlike some teams that have their key icon or identifier on the ‘jock tag’ on the lower seam of the jersey, we were insistent that the flag be very visible and somewhere that everyone could see. And there is no better place than right above the players’ names and numbers – reminding everyone that they’re all part of New England," Bilello said. 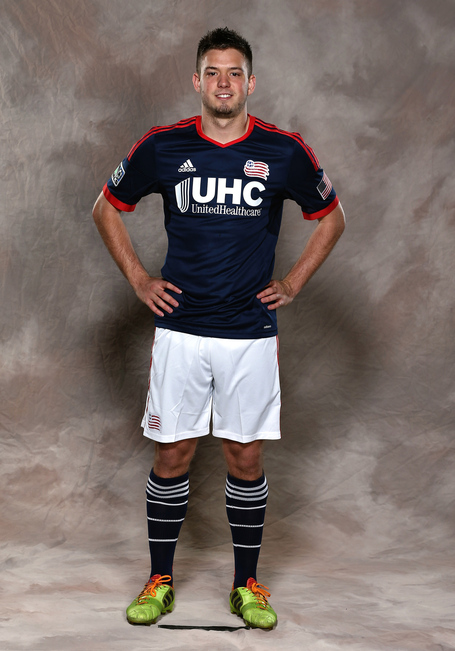 The main kit is navy blue and made of a light material, with red stripes running down the sleeves and a new, aesthetically-pleasing United Healthcare logo across the chest. The Flag of New England is again featured on the back of the jersey, above the player's name.

The shorts are white with three red stripes down the side, too. Interestingly, the Revs and Adidas even took into account some symbolism when designing the socks: they are solid navy-blue, except for six thin white stripes ringing the players' calves and ankles. The six stripes represent the six states of New England.

Reaction to the jersey has been a healthy mix of excitement coupled with a touch of disdain. Generally, though, it's been positive:

Do #NERevs have any legal leverage vs UHC for destroying their shirts with that logo? #JokingButSeriously

Check out Kelyn in the new #NERevs kit! It's gonna look even better on him after he scores a goal on Saturday. pic.twitter.com/Q38qXraL5g

And the boring kits keep rolling. So that's $160 +/- that I'm going to spend on jerseys I'm ambivalent about. #NERevs #USMNT

Have I mentioned how much love the #NERevs new kit yet. Simply outstanding.