Teal Bunbury left Kansas City looking for more playing time, and now looks to be the first-choice striker with the Revolution. He'll have big shoes to fill, but his concerns are with scoring goals and winning matches, not replacing anyone.

Last year, Teal Bunbury sat down with head coach Peter Vermes to discuss his future with the club.

The 24-year-old had been with Sporting KC since 2010. His first two seasons, in which he contributed 13 goals and five assists in 54 appearances, were particularly impressive. Consecutive ACL injuries would stall the former US international's growth as he was limited to only 34 appearances in 2012 and 2013.

With established forwards like Claudio Bieler, Dom Dwyer and C.J. Sapong ahead of him, Bunbury believed that a transfer would be best for him and Sporting KC. 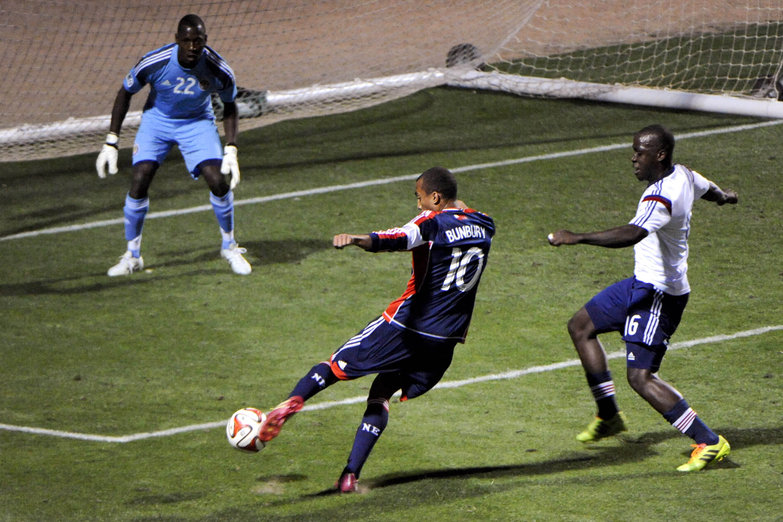 "I kind of had a talk last year with Peter," Bunbury said. "Every player wants to be playing and that's just how it was. I had a good conversation with him and I think it worked out for both teams."

The move was bittersweet for Bunbury since he left behind an organization for which he won a US Open Cup and MLS Cup. Still, the opportunity to join the New England Revolution, with one of the youngest rosters in the league, was an exciting prospect because they play Bunbury's style of soccer. The newcomer recorded two goals in 136 preseason minutes, showing that he has adjusted well.

"I feel like there are a lot of guys that enjoy playing those quick balls into each other's feet, running off of it and that's the type of style that I love to play," Bunbury remarked. "You got Kelyn [Rowe] in there, Lee [Nguyen] in there, Diego, you got a whole bunch of guys that love the ball at their feet and love getting it and going. So, I think that's going to be our go-to style."

The Revs, who sacrificed their first-round pick in the 2015 SuperDraft and allocation money to acquire Bunbury, were motivated to make the trade because of the offseason departure of Juan Agudelo. The current FC Utrecht man made the Revs one of the more dangerous sides in MLS last year, himself having seven goals and one assist.

Although Bunbury will likely be the team's first-choice striker, he doesn't feel pressured to be the next Agudelo.

I can't control what people's expectations are of me. I only know what I can control and that's going into training and giving it my all, trying to get better and going into the games and trying to work with all the players. -Teal Bunbury

"I don't think there's pressure in that," Bunbury revealed. "I think it's just dealing with things that I can control. I can't control what people's expectations are of me. I only know what I can control and that's going into training and giving it my all, trying to get better and going into the games and trying to work with all the players."

This season will be important for Bunbury since he's in the last year of his contract, according to ESPN commentator Taylor Twellman. Bunbury hasn't given much thought about his contract status or his next move, but he did share that he would be open to any opportunity, including those in Europe.

"I feel like every player wants to at some point play [in Europe], but for right now I'm happy where I'm at with New England and looking forward to the beginning of the season," Bunbury said.