Could Charlie Davies Benefit From a Loan to Rochester?

Charlie Davies clearly has pedigree, but he can't seem to get on the pitch or in the 18 for the Revs in 2014. A loan to Rochester may be the best thing for his flagging career.

Share All sharing options for: Could Charlie Davies Benefit From a Loan to Rochester?

Going on loan is not a punishment, but rather an opportunity to get competitive minutes, capture form, and prove your worth.

No player in MLS has epitomized this more than Sporting Kansas City's Dom Dwyer. After playing only four minutes during his rookie campaign, Dwyer went on loan to Orlando City SC in 2013. The English-born striker caught fire with the Lions, scoring 15 goals in 13 regular season games to be named USL Pro's co-Golden Boot winner. Dwyer was recalled by Sporting KC on June 27th, but still kept his form as he netted goals during the MLS regular season, playoffs, and CONCACAF Champions League. 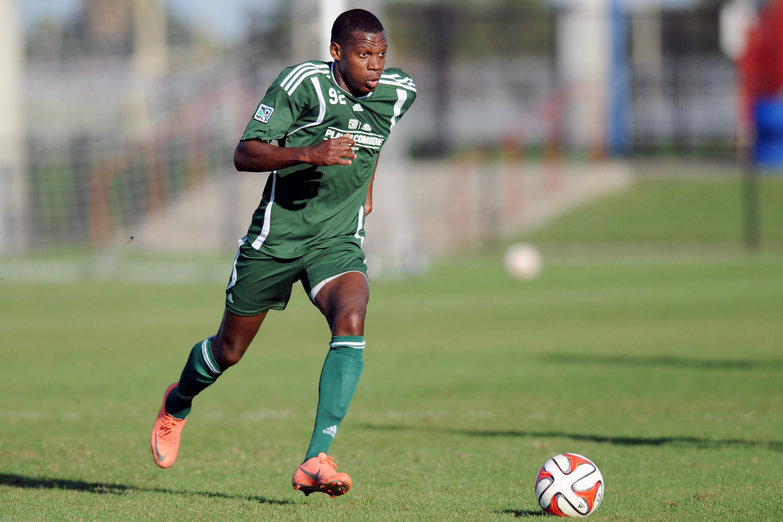 The Rhinos and USL websites have apparently leaked the signing of Revolution draft pick Pierre Omanga to Rochester.

Last year's success story has prompted teams to use their affiliates as a way of finding the next Dom Dwyer. The Vancouver Whitecaps have loaned former first round draft pick Omar Salgado to the Charleston Battery. The Columbus Crew has sent Ryan Finley, who made 14 appearances last year, to Dayton Dutch Lions. And the LA Galaxy, who obviously have a unique situation, have lent the LA Galaxy II six players, including the promising Jack McBean.

The Revs could have a Dwyer-esque situation with Charlie Davies.

In a preseason teleconference with the media, head coach Jay Heaps claimed that the team could take a new approach to their partnership with the Rochester Rhinos.

"The partnership is certainly something that we're taking very seriously," Heaps commented. "We want to have a back and forth (of player movement) as well. We don't just want to send the four players and leave them there. I want there to be some dynamic of returns so, we'll carry 30 and most likely 26 will be training with us all the time."

Davies, who hasn't made a bench appearance in the 2014 regular season, could benefit from a short-term loan. The Boston College product has said on multiple occasions that this season is "do or die" for him. Missing the bulk of preseason was surely difficult for Davies since he was trying to gel with his teammates and learn a new system. Spending some time in Rochester would ensure that Davies is fully recovered from his calf injury and help him regain match fitness.

A stint in Rochester could also be a confidence booster for a player that hasn't scored in two-and-a-half years. Snapping a scoring drought can be difficult and a loan might allow Davies to regain form. Considering the streaky nature of goal scoring, Davies could score a few goals with the Rhinos before making a return to the first team.

It may seem strange to suggest loaning to the American third division a player that once featured for the US national team, but you have to remember that a loan is an opportunity, not a punishment.

Donnie Smith-While Smith has already earned a regular season start playing his accustomed midfield position, he spent a large portion of preseason experimenting at left back. The athletic sophomore didn't look out of place on back line as he made darting runs forward while staying composed defensively. A loan-spell would allow Smith to get regular minutes to see if he could potentially be Chris Tierney's heir.

Steve Neumann-After serving as an unused substitute in the season opener, Neumann hasn't made a bench appearance. Like Davies, Neumann suffered an injury during preseason, which affected his transition to MLS. The Georgetown product currently has a lot of competition as Lee Nguyen, Kelyn Rowe, Daigo Kobayashi, and Scott Caldwell all prefer to play centrally. Going to Rochester would allow Neumann to get regular playing time as he learns to adjust to life as a professional.

Patrick Mullins-The 11th overall pick in the 2014 SuperDraft made a quick impact as he started and played 45 minutes in the Revolution's season opener. Playing as a right winger, Mullins looked sharp on the attacking side of the ball, but didn't look entirely comfortable defensively. A trip to Rochester could help the rookie learn the wing position in case he's deployed there in the future. It should be noted that Mullins hasn't been on the bench for the last two games.