After two woeful performances, it may be time for the Revs to make some changes to the lineup. Here's what the guys at the Bent Musket suggest. 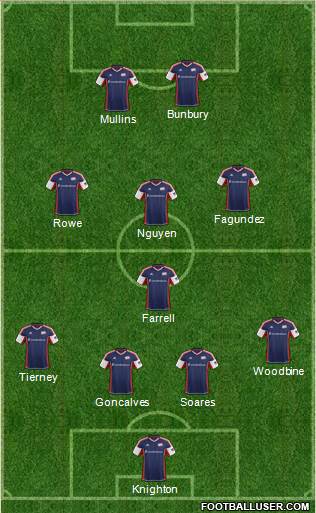 The way I see it, we need more ideas in the final third. So, why not build the attack around the "Big 3" of Fagundez, Nguyen, and Rowe? In this set-up, I'd keep the wingers (i.e., Diego and Kelyn) tucked in closer to the middle of the pitch (but not on top of each other) allowing all three to interchange pretty freely. While they'll be encouraged to seize opportunities in front of goal, their primary focus would be creating chances for others. Woodbine gets the nod at right back because I think he is the most natural right back on the team and knows how to overlap the winger and send in crosses. Plus he has the pace to keep up with Vancouver's speedy strikers. Also, with two forwards, there are more bodies available to get on the end of those crosses.

As for the forwards, I think both Patrick Mullins and Teal Bunbury deserve a chance to show that they can play off of each other in a two-striker system (and, no, I don't think Jerry Bengtson deserves a *third* chance at this point). Both Mullins and Bunbury can be lethal around the box, but neither is really an ideal hold-up man. The biggest question mark is whether Andrew Farrell is up to the task of playing defensive midfielder. To me, Farrell possesses the mobility and the physicality to play the position. He's great with the ball at his feet and knows how to maneuver out of tight situations (a valuable quality considering the fact that we seem to have so much trouble passing out of the back these days). Sure, maybe he's not the best passer we've got, but with Nguyen as the central link between the defensive half and the attacking half, I think it could work. 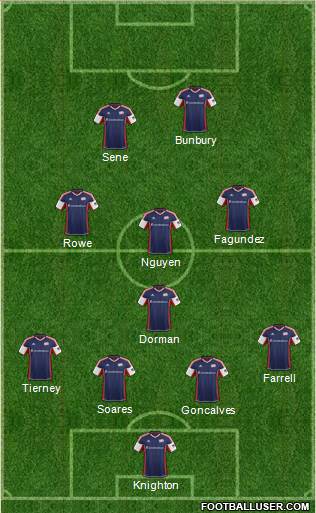 Despite Bobby’s clear communication struggles—and inability to hold the ball in traffic—he has yet to surrender a soft goal. Part me of wants to see if he can shake off the discomfort, but the other wants to explore his backup’s upside. The goalkeeper decision is difficult—but far from the Revs biggest concern. I think Knighton deserves the start against his former club, pushing Bobby to clean up his one-dimensional play.

In the middle, I’d like to see Dorman get another shot as a lone holding midfielder. I’m intrigued by the possibility of Farrell earning that spot, but I’m not convinced that we’re desperate enough to pull him away from the back line. Long-term, I see Farrell as a right/center back, and I hate to force him into a new role when he’s excelling as a true defender. He has the speed, clever footwork and on-point positioning to stick with the ‘Caps forwards.

In front of Dorman, I’d like to see the trio of Nguyen, Rowe and Fagundez. And honestly, who wouldn’t? By sticking the Revs three playmakers together in the center of the field, Heaps will focus on creating opportunities behind a pair of capable forwards. Nguyen has shown that he still possesses the creativity to set up chances; he just needs two equally creative running mates to create beside him. Farrell and Tierney would be encouraged to function as wing backs, adding width—and crosses from the flank—when necessary.

Up top, we absolutely, positively need to add a striker beside Bunbury. I’m a complete sucker for Saer Sene, and believe he adds the dominant presence the Revs so desperately need. When Sene entered the Houston match, he immediately went to work creating chances, using his strong frame and smooth footwork to push the ball forward. Sure, he probably functions best as a wide midfielder in this system, but he adds too much attacking value to ignore. The Frenchman deserves a shot. 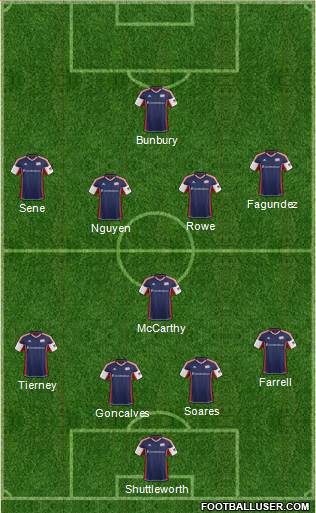 Shuttleworth gets the home opener and if he doesn't prove to me that he deserves to keep his job (i.e. make a drastic improvement to his first two games) then I'm on the Knighton bandwagon. Defense and midfield is the same as last year if everyone's healthy and not holding out with a contract dispute and Bunbury up top. Let's see if Teal can compliment the full Revs offense and improve his hold up play with all the playmakers surrounding him.

Now, inserting Stephen McCarthy to the holding midfield spot is perhaps not the craziest thing I've ever suggested. He's played the position before but has largely featured at center back in recent years. The problem is the Revs need a legitimate defensive presence at that spot and I want to keep Andrew Farrell on the backline. Caldwell is getting demolished out there, it's not Andy Dorman's best position and Macca has got to be dying to get on the field. All the other options Heaps has deployed there haven't worked so I'm more than okay to see if this one works. The only other idea I have is perhaps center midfield trio of Kobayashi-Nguyen and Rowe with Lee doing most of the dirty work at the holding spot. 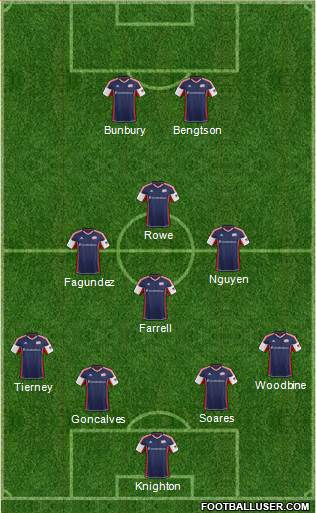 Let’s get it out of the way now. Yes, I did put Jerry Bengtson in my ideal starting lineup. Maybe I’m naïve, or perhaps an optimist, but I just refuse to give up on one of CONCACAF’s best goal scorers. As the first sub off the bench, Bengtson has had, and scuffed, two quality chances. With the World Cup looming, Bengtson will be eager to perform at the club level, and pairing him with Teal Bunbury in a 4-4-2 might be the instigator. If Bengtson continues to struggle, Saer Sene takes his spot.

My midfield would be shaped like a narrow diamond to allow for frequent interchanging. Diego Fagundez and Lee Nguyen would start on the flanks while Kelyn Rowe occupies the middle. Behind the attacking trio would be Andrew Farrell. With his daunting physicality and great ball-handling skills, the sophomore could become the team’s first choice defensive midfielder.

My narrow midfield requires outside backs that can get forward. As a result, Chris Tierney is my left back and O’Brian Woodbine is my right back. Tierney, who was recently named the most accurate free kick specialist in MLS, is an obvious choice at left back. Woodbine is less obvious, but he did show an affinity to attack during preseason.

Placing Brad Knighton between the sticks is a personal preference since I don’t believe Bobby Shuttleworth can be blamed for many of this year’s five allowed goals. I’ve always thought that leaving Knighton exposed in the 2009 Expansion Draft was a mistake and the North Carolina native helped prove me right with good performances throughout the preseason. I’m not anti-Shuttleworth, I’m just pro-Knighton.

Have a different lineup that you'd like to see Jay Heaps field on Saturday? Let us know in the comments section below!