The 3rd Yellow - Confusion and Consistency With "Over The Back" Fouls

There is a play in soccer that our resident official is inherently confused about, and referee Kevin Morrison only added to the confusion last weekend.

Share All sharing options for: The 3rd Yellow - Confusion and Consistency With "Over The Back" Fouls

You didn't honestly think the replacement referees could go two weeks without me writing a column did you?

But, I want to be very clear about something before I get to far into this column, which is going to make it seem that Kevin Morrison did a bad job in the New England Revolution-Philadelphia Union game last Saturday. To be very fair, he did pretty well overall and the calls I'm going to discuss largely did not have an effect on the game or its outcome.

But for starters, I have to address the Austin Berry foul on Jerry Bengtson in the early minutes of the second half. Berry, who was booked minutes earlier for a rather soft foul on Lee Nguyen (it was ruled a tactical foul but it was also his 3rd recorded foul and he should have had a few others) in all likelihood committed a foul on Jerry Bengtson, but that's it I think. Could it have been ruled another tactical foul, sure, but unlike the Nguyen foul where Berry reached out and had his hands on the back off the Revs midfield, Berry just gets tangled up with Bengtson on the right flank with defenders in support in the middle of the field, and there's no call. Berry is subbed off minutes later with an injury and the game moved on.

However, that doesn't mean that I agree with how Mr. Morrison officiated the game, because as pointed on the broadcast, he was very inconsistent. Overall, there was a lot of physical play that was allowed and at times called very tight and it was noticeable very quickly. And one of the rules Morrison was very inconsistent with in my opinion, much to the ire of the Union players mostly, was the "over-the-back" rule that I'm not really fond of. In fact, I tweeted about that said issue midway through the game, possibly in response to the Soares-McInerney play I will discuss later, and it actually made the Union Comcast television broadcast's Twitter segment, shown here on this screenshot from my MLS Live subscription. 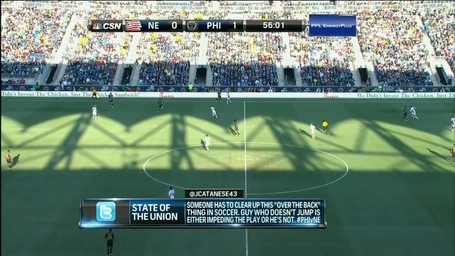 You see, the rule is inherently unclear, and it's not just in MLS, this is a worldwide issue. Two players approach a ball that is in the air and largely chaos ensues. You see players jumping through the back of opponents, the man jumping for the ball getting undercut by the second player and a lot of other scenarios. I'd like to say there should be a clear cut rule on this but largely you have to take each play individually at face value. And there were a lot of them.

No seriously, here they all are according to my review of the game:

Okay, so I can't really go into a lot of detail here, so bear with me for the rest of the paragraph. Those two Berry pushes were obvious fouls (and that third one labeled no call should have been his third), anything that's ruled as "Over the Back" means that player initialed contact on an opponent and "Obstruction" means that player prevented his opponent from cleanly playing the ball. Anything labeled No Call or Advantage means that I think the referee at the very least had to acknowledge a foul and let play continue but several of those calls are subtle. And this isn't every play either, I thought Edu was wrongly called for a foul on Lee Nguyen in the first half but that wasn't an aerial/"over the back" type of play. 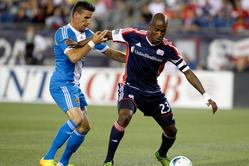 Take a look at all the coverage from last weekend's Revolution-Union game in the Story Stream.

Notice a few things, mainly those asterisked plays near halftime by the Union. I put those in for two reasons. The first being is that "high boot" by Fernandes occurred with A.J. Soares head at waist level, which isn't an infraction in my opinion. Second, the obstruction call by McInerney is the call I really want to explore, because I agree with most of the calls above even if I didn't see the advantage signal I wanted every time on the no calls.

You see, McInerney is called for an obstruction, after taking out a jumping A.J. Soares who's going for a header following a clearance from Austin Berry. And I'm not saying the call is wrong, but it's not consistently called this way during the game. McInerney gets to the spot first to control the ball, but he's not exactly and aerial threat that Soares is, so when Soares jumps over him, McInerney does what anyone would do and rolls the defender off. Yes he undercuts Soares by definition, but why is he penalized for getting to the spot first?

Don't get me wrong, this is a dangerous play and it needs to be addressed. Soares can end up falling awkwardly on his head or shoulder and face a serious injury. But then Jerry Bengtson, running towards goal, goes up for a header, misses, and basically lands on top of Aaron Wheeler, and Bengtson is called for the foul. It's not the best example, but, doesn't Wheeler technically obstruct Bengtson? And later in the game, why does the whistle suddenly go away? And why do Teal Bunbury and Diego Fagundez, who combined for several subtle obstructions while defending Union players going up for headers, not get whistled for a foul or at least see an advantage given?

None of these calls or plays are earth shattering or significant, but they're still important and I'd like to see a clear message from anyone, FIFA, MLS, The FA/EPL on the subject. When I watch the EPL it seems like the player that doesn't jump is always ruled to be obstructing the play, and while I'd still like to thing each play is different, at least there is consistency in the calls, even if I don't always agree with them.

Because this play happens a lot in soccer, and it can get dangerous as we saw with Soares' undercut and Bengtson landing on top of Wheeler. If you clarify this rule, then everyone on the field will know the outcome of the play and there won't be any anger or confusion from anyone. If you get to the spot first, it's your ball and the defender can't come over you to get it. Or if you're both on the spot and only one player jumps, the player on the ground is obstructing. These should be fairly clear decisions I think, and after seeing last week's game, clearly it is not.

Austin Fido of SBNation's New York Red Bulls blog Once A Metro takes issue with the perceived reputation of Jamison Olave. And Austin's got a point, it's pretty good article. Olave was called for a penalty that many would perceive as "soft" and that lead to the Colorado Rapids equalizing from the spot in a 1-1 draw.

Now, is this a foul? Well, technically there's probably contact between Olave and the Rapids' Martin Chavez and it occurred in the box...so that's a penalty. I can't really take issue with that. But one thing that Austin failed to mention in his column is the gross embellishment Chavez engages in on the ground. Clearly Chavez gets his money's worth from the contact and I hope that the MLS Disciplinary Committee gets some of that back when they fine Chavez for his theatrics.

Also, according to the Toronto Sun's Kurtis Larson, the MLS DC has suspended Seattle Sounders Clint Dempsey for two games for his punch to the man region on a Toronto FC player last weekend.