10 Players have been retained by the Rhinos after the team exercised the contract options for them.

The core of Rochester's impressive 2014 season is returning for next year. Goalkeeper John McCarthy highlights the list but the other players provide consistency across the field.

After the worst season in team history in 2013, Bob Lilley returned to Rochester to lead a complete roster overhaul. Only five players returned to the fold in 2014, including injured striker Matt Luzunaris and backup goalkeeper Brandon Miller.

The 10 players returning for next year is a significant number in USL PRO and indicates that the club liked much of what they saw this past summer. 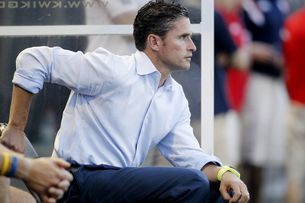 Brendan takes a look at the four Revolution players who spent significant time in Rochester for 2014 and how they stack up in the professional game.

2014 Goalkeeper of the Year and Rookie of the Year in USL PRO, McCarthy was arguably Rochester's best player of the campaign. Brandon Miller is also signed on to play his fourth season for the Rhinos, all as the backup.

In addition to that goalkeeping tandem, the team is also bringing back four stand-out defensive players. Right back Pat McMahon logged 2044 minutes (third most on the Rhinos) in 2014 and was no stranger to an overlapping forward run while maintaining discipline in defense.

Babacar Diallo, a French-raised Senegalese defender, had a notable rough spell while adjusting to playing with the Rhinos. Diallo was sent off at the end of Rochester's U.S. Open Cup match against the Revolution but blossomed into a stalwart of a stingy defense in USL PRO.

Onua Obasi isn't a prototypical left back and retains his silky futsal skills to burn any opposition that didn't do its homework on him. The native of Birmingham, England, was a constant outlet for the Rhinos when attacking players vacated space up the left wing.

Tony Walls is a hard-nosed player whose unforgiving challenges belie his quiet disposition off the field. Walls played any number of positions for the Rhinos (across the back line and midfield) but always played with heart and conviction. After solidifying his preferred central defensive midfield role in the middle of the 2014 season, Walls should return to Rochester ready to lead the team into 2015.

Mike Garzi and Johnny Mendoza are both players who didn't see enough of the field in 2014. Garzi was often a late substitute introduced in order to shore up a match by clogging the midfield. Lance "Sunshine" Rozeboom moving to Austin Aztex opened up the possibility of much more playing time in 2015 for Garzi. Mendoza is a creative attacking midfielder with a never-say-die attitude. The Colombian-born player has the finesse to create goals from set pieces but also the drive to make 70 yard runs to score goals sliding through the penalty area.

Up top, both Colin Rolfe and Alex Dixon impressed Lilley enough for the contract option. Though coach Lilley noted Dixon's frailty and Rolfe's misfortune, he never questioned their commitment. Dixon was second in scoring on the team in 2014, with three goals and two assists, while Rolfe was fourth with two goals and two assists.

These 10 players are a good start to building the roster for 2015 but Lilley knows he needs to do more as USL PRO continues to grow. Question marks surround