Okay, so last week actually went rather well. Not from a predictions standpoint, my XBOX360 and FIFA15 thought the first leg would end 1-1 last week.

I'm talking about the actual, on the field evisceration the New England Revolution put on the Columbus Crew last week. Because the updated rosters for both sides reflect the outcome of the first leg. And if you thought the Crew had a tall task before this game, imagine having 9 of your 11 starters out of form going into the second leg.

Lee Nguyen Called up to USMNT 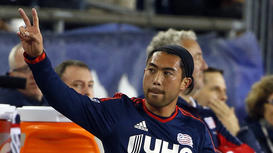 According to Jonathan Kraft in a radio interview earlier today, Lee Nguyen has been called up to the USMNT roster for two upcoming friendlies.

With the exception of the in-form Justin Meram (who score in the first leg) and the neutral Federico Higuain, EVERY other player in the Crew's starting lineup is out-of-form and gets a negative rating attribute attached to them for this matchup. On the other side of the ball, both Revs center backs, Soares and Goncalves, also have negative attributes which seems harsh to at least Soares in my opinion. Jones, Nguyen and Davies all have positive rating attributes for being in-form and the bulk of the Revs lineup is on average/neutral form.

In theory, the virtual Crew don't know that they're down 4-2 on aggregate and need to press forward, because the first 15 minutes are a turnover fest for Columbus going forward until the 15th minute when Higuain takes a shot from twenty yards that Shuttleworth has to parry wide. The ensuing corner is collected by Shuttleworth as well and the Revs start their attack. Kelyn Rowe fires horribly off target in the 25th after turning Tchani at the top of the box and getting into the Crew penalty area. The Revs continue their patient, possession based approach and it allowed Jones to fire wide in the 30th minute as the Crew cannot string together passes in their own half. Andrew Farrell breaks up a promising Crew counter attack by clearing out a cross in his area, the ref plays advantage following a Trapp foul (he's carded afterwards) and Bunbury enters the area and finds a sliding Davies who slots the opener past a diving Clark. First half ends 1-0 to New England. Columbus with only 83% passing in the first half to the Revs 94% and trust me, anything below 90 a really low number for the simulation.

The second half begins with a slew of mostly bad sliding challenges since they just amount to a lot of players sliding for no reason. Caldwell sends a really awesome through ball to Davies but his first touch fails him and the Crew break up the attack in the 55th. There's a flurry of substitutions for both sides, including one for an injured Trapp, and Jairo Arrieta is virtual Gregg Berhalter's last sub as he looks to change the attack. But Columbus is just disjointed in this game, well, more than usual for these simulations as everything in their attacking third turns to mud. Entering the final 10 minutes the Revs clearly look like they're just holding the ball and stalling for time as substitute Mullins dribbles freely in the penalty area without shooting. Full time, New England wins 1-0, 2-1 on aggreage in both simulations, 5-2 when added to the real world results.

We're going to name Charlie Davies the MVP award for his simulated game winner and two real goals from the first leg.

WHY THIS SIMULATION WILL BE RIGHT 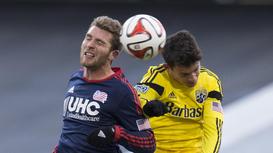 Jake is back with Massive Report's Pat Murphy as they look how both teams will approach the second leg as well as the budding rivalry between the two teams.

Because it's basically how the Revs should play this game, lots of high pressure, counter attacks and solid defense. It's the game plan the Revs should use because it's their style of play to begin with and it worked really well in the first leg. They're able to spread out the Crew defense and create chances from outside the area as well and even though the simulated shots were dreadful, long distance shooting is a strength of the Revs.

WHY THIS SIMULATION WILL BE WRONG

Because it's impossible to recreate the situation that the Crew face in the second leg, down two goals on aggregate they weren't nearly aggressive as they needed to be and were just downright bad in the first half. The second half saw them string together some passes but it didn't lead to a single chance or shot on goal. Also, Federico Higuain was dispossessed 6 times off the dribble, stalling much of the Crew attack, a side affect of FIFA's tendency to over dribble and not something I expect to see in a few hours.