In the wake of Bradley-Wright Phillips' foolish suspension, we break down the Red Bulls immediate future: who will start up top on Saturday?

Red Bulls forward Bradley Wright-Phillips, the unrivaled king of poaching, has set the MLS world on fire with his flair for the spectacular. For Wright-Phillips, however, a flair for the unspectacular--scoring on the back end of broken plays--has made all the difference, as the Lewisham native used his goal-scoring prowess to help the Red Bulls earn a spot in the Eastern Conference Finals. On Sunday, Wright-Phillips' scrappy goal only strengthened this reputation, when the Englishman made good use of teammate Peguy Luyindula's gritty passage of play.

But on Saturday, when the Red Bulls visit Foxboro, Wright-Phillips' 27-goal wonderseason will come to an unexpected halt. The former Southampton star and 2014 MLS Golden Boot winner will watch the action from a distance, fulfilling a one-game suspension that resulted from his second postseason yellow card--a foolish booking for impeding Bobby Shuttleworth while the goalkeeper attempted to distribute out of the penalty area. 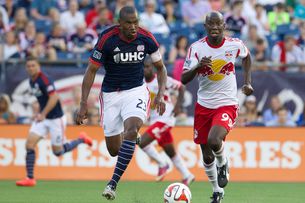 In the aftermath of the Red Bulls loss, both Bradley Wright-Phillips and head coach Mike Petke were surprised to learn of the strikers accumulation suspension and Seth thinks that reaction reflects poorly on both player and coach.

As Wright-Phillips later admitted, the suspension came as a surprise; he, his teammates and Head Coach Mike Petke had no idea that a second booking would lead to a suspension, an inexplicable gaffe that has drawn criticism from all ends of the league. If the Red Bulls fail to make up a 2-1 aggregate deficit, Wright-Phillips 2014 run will come to an end, concluding an astonishing season in crippling fashion.

When the Red Bulls take the turf on Saturday, and look to recover from a disappointing home loss, they will need to account for Wright-Phillips and his four postseason goals. Does Petke have the personnel to plug in a replacement for his serial goal scorer? We offer three possibilities for Wright-Phillips' replacement below.

In all likelihood, the former Everton man will take over as the Red Bulls lone forward. His tendency to make powerful runs into the box will offer a natural transition from Wright-Phillips, who often finds himself in a similar position, pushing past the back four to wreak havoc for opposing goalkeepers. Cahill, the taller, more physical forward, will also provide a slight upgrade in the air, despite Wright-Phillips' aerial success throughout the course of the season. With Thierry Henry spraying crosses into the box, Cahill will provide a solid weapon in front of goal.

Unfortunately for Petke, Cahill has recently drifted into something of a utility role, typically entering matches late in the second frame. In fact, his season has served as a relative disappointment, as the Australian international contributed just two goals and two assists in 1,516 minutes played (in 2013, he scored 11 goals and added five assists in 2,243 minutes).

Now, after surrendering his starting spot to Luyindula, Cahill has undoubtedly fallen out of top form. In his short appearance on Sunday, the Sydney native immediately downgraded starter Eric Alexander, picking up a yellow card just a minute into a less-than-inspiring shift. Though his role would look far different on Saturday, Cahill has shown no sign that he can enter the Starting XI and replace Wright-Phillips, upgrade Alexander or add an attacking asset to the club's midfield. If the Red Bulls want to hoist the cup, Cahill will have to quickly find his 2013 form.

Henry Will Play On Turf At Gillette 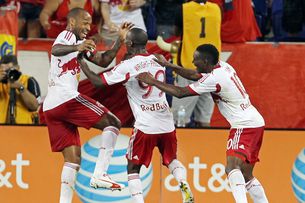 In a move that surprised no one, Thierry Henry said after the first leg that he will play for the first time at Gillette Stadium, Seth has the details once again.

Henry, one of the premier goalscorers in the history of the game, delivers elite playmaking ability out of the middle of the park; without him, Wright-Phillips 2014 campaign would have concluded with a much humbler stat line. If Petke pushes Henry forward, the Red Bulls will rely on Luyindula and Lloyd Sam to carry the weight out of the middle, with Tim Cahill likely filling the third midfield spot.

Without question, the decision to substitute Henry for Wright-Phillips raises more questions than it answers. Although Sam found  brief pockets of space in Sunday's first-leg loss, he struggled to consistently provide service for New York's frontrunners, a pivotal role for the versatile winger. The Red Bulls would also lose the Henry's width, skill on the flank and crossing ability, altering Petke's gameplan ahead of a must-win match. Unless the second-year Head Coach decides to make a drastic change on Saturday, Henry will likely hold onto role as a wide midfielder.

For three seasons in New England, Sene featured both up top and out wide in Jay Heaps' 4-1-4-1 formation. Though injuries led to on-field inconsistencies, the Frenchman found success in the Revolution system, scoring 17 goals in 42 starts. His skill over the ball, finishing ability and powerful 6'3" frame make him a constant threat from virtually anywhere in the attacking third.

For the Red Bulls, however, Sene has played just 90 minutes of soccer, contributing zero shots in five appearances. He has not seen the field since mid-September, when the lanky forward played 15 minutes in a draw against Philadelphia. Though it seems unlikely that Sene will start against the Revolution in a do-or-die second-leg match, he could provide a spark off the bench, should Petke choose to abort his pre-game strategy.  Once a week-in, week-out starter, the former Revolution man will serve as a last-ditch lifeline for the Red Bulls, who need an immediate solution to their Eastern Conference woes.

Step into Mike Petke's shoes and tell us: with Wright-Phillips out of the picture, who poses the greatest threat up top?