The speculation can finally stop: Thierry Henry will play at Gillette Stadium.

The speculation is finally over: Thierry Henry will play on the turf of Gillette Stadium.

With the New York Red Bulls facing the New England Revolution in the Eastern Conference Final, rumors swirled about Henry’s status for the second game. Since joining the league in 2010, the talented Frenchman has avoided playing at Gillette Stadium, often times due to a convenient injury.

Henry was coy heading into the first leg of the series, saying that he would address the matter later. After the Red Bulls lost to the Revolution, increasing the magnitude of the return leg, Henry confirmed to media that he would make his Gillette Stadium debut.

"I’m playing. You happy?" Henry said after the game. 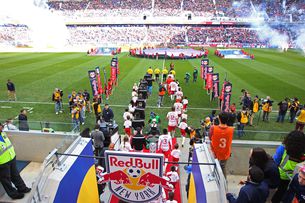 There wasn't a better time for New England's first win at Red Bull Arena, and Casale, Hemming, Jake and Corey give their player ratings from the first leg.

Henry’s decision to play was likely influenced by the game’s importance. While Henry helped the Red Bulls win a Supporters’ Shield last year, the MLS Cup has been elusive. With his MLS future uncertain, this could be the last chance for Henry to lift the league championship.

"The only thing is if my Achilles don’t last, then I will be on holiday if we don’t go through," Henry stated. "I’m sure guys wouldn’t care if I can walk or not after that. That’s just the way it is."

This won’t be Henry’s first time playing an MLS game on turf. The Frenchman has played on the Portland Timber’s surface on three occasions, including at this year’s MLS All-Star Game over the summer.

Overall Henry is 1-0-2 when playing on turf in MLS. His lone victory came when the MLS All Stars defeated Bayern Munich 2-1. Interestingly both of his league matches on turf ended 3-3. The legendary forward did have a goal and assist against the Timbers on 6/19/2011. He also earned a late red card in that game.

It should be noted that new, state-of-the-art turf was installed at Gillette Stadium at the beginning of the season.