Jurgen Klinsmann's side has conceded three straight late games that have cost them results in friendlies. The results don't matter but the eternally optimistic Klinsmann thinks his team played well against Colombia? Something has to change.

Share All sharing options for: United States vs. Ireland Preview: Jurgen Klinsmann Needs To Buck Recent Trend In US Friendlies

I understand that there is always going to be an less of an emphasis of the results on international friendlies, it's more about the individual performances or getting players experience and playing time at the senior level.

But losing three straight results by giving up three goals in the final five minutes? Constant tinkering with formations and lineups? I like Jurgen Klinsmann for what he's done on the field, but what he's been doing in friendlies lately is almost maddening to me. And for what it's worth, this is the game today I would've had fun with after giving the first team a runout against Colombia.

And it's not just the results at the end, the score doesn't matter, but the play on the field that concerns me. Klinsmann is putting out lineups that are clearly set up to fail. Against Colombia, Mix Diskerud was ineffective as the center attacking midfielder, centerbacks John Anthony Brooks and Jermaine Jones were unable to build comfortably out of the back due to Colombia's constant pressure and there was little attack generated from the Americans despite their early lead on a comical handball in the box.

And yet Klinsmann seems to think that his team performed well against Colombia. That Jozy Altidore was a "real handful" and that his penalty kick shows his worth as a striker. It doesn't, and that was a crap penalty that should've been saved. Does that mean Jozy isn't dedicated and did give any effort, no, of course not. He had a bad game along with a lot of other USMNT regulars. And part of that as far as I'm concerned has to do with Klinsmann tinkering too much with his lineups and formations.

Case in point, he even says it in this post-game article: "You can solve things by saying hit the ball long, but that's not how we want to play, that's not how you learn," he said. "You play it out from the back. I want our center backs to be more and more confident playing it in that style, to keep it on the ground."

Well Coach, maybe let's not pair a defensive midfielder with three young defenders with only one holding midfielder as an outlet against one of the most high pressure teams in the world? That seems like a good idea. And while I don't care about the results on the scoreboard, I do care about the results on the field, and recently, all the USA has done is get an early lead, sit back and defend. And they're bad at it. And Klinsmann has generally done little about it as far as adjustments or substitutions. 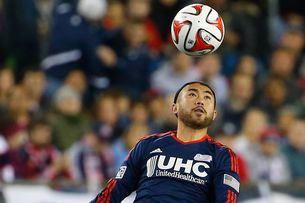 It might not have been the longest return, but Lee Nguyen's 12 minutes off the bench proved he's going to be a key player for the USMNT going forward.

Speaking of substitutions, blatant homerism aside, it took Klinsmann about 15 minutes too long to insert Lee Nguyen into the game against Colombia. Plus, Klinsmann knows he's releasing Nguyen after the game, so why not actually give him enough time to impact that game, which he did anyway in just 12 minutes of game action. And that late sub of Julian Green for DeAndre Yedlin? It was comical before Green's mark headed home the winner directly over him.

Look, I understand trying to get players experience and finding out what they can and can't do, that's what training sessions should be for. When you're on the field, it should be about putting your players in the best position to succeed, and lately, Klinsmann hasn't done that. I would've taken a first string lineup against Colombia and let my starters get tested against a tremendously talented opponent. Instead, we learned very little from the Colombia game in a positive sense.

Yes, Lee Nguyen had a emphatic return in twelve minutes, Rubio Rubin found himself in some very nice positions and flashed a few headers wide and Greg Garza continues to look solid at the left back position. But the spine of the US was set up for failure the moment that game kicked off. Jones and Brooks had no cover and spent too much time covering for their fullbacks, had no outlet passes to link up to the midfield and Mix Diskerud was aimless in the center of the field. Yet Klinsmann is encouraged by this...I'm sorry, but there was nothing about the US attack to be encouraged about on Friday.

Now, Jurgen Klinsmann is essentially facing a second string Republic of Ireland side (Robbie Keane is back with LA Galaxy) coming off a Euro 2016 qualifier against Scotland. After resting arguably his best centerbacks in Matt Besler and Geoff Cameron along with veteran Timmy Chandler, Klinsmann's best centerbacks are going to be facing a weakened lineup, hardly the benchmark game that will test his World Cup veterans. With DaMarcus Beasley going back stateside after subbing on for the injured Garza, today's game with Ireland would've been the perfect time to run out the younger defenders. Instead, Klinsmann opted to start Jermaine Jones in defense knowing he'd be released after the game back to the New England Revolution, rather than play him at defensive midfield alongside Beckerman, which I'll mention again allowed Colombia to run rampant for the entire game despite Beckerman's solid presence in the middle. Instead of starting his regulars to test them against a superior team, Klinsmann opted to give an 18-year old his first start and completely break his midfield.

And for the record, Rubio did fine. He's more of a creator at Utrecht and the fact that he had a chance to nod home two headers means he has a knack for positioning in the box but at 5'9" I'm not going to crush him for not being the most accurate finisher with his head. But the US midfield was completely outmatched and overwhelmed with the two strikers and that was the wrong time for Klinsmann to trot out a 4-1-3-2. Jones and Brooks did fine all things considered and being under siege pretty much the entire game and we still know that Kyle Beckerman is completely underrated and good at soccer.

Today against Ireland, though, would be a great time to trot out a 4-5-1/4-3-3 formation against Ireland with Julian Green and Miguel Ibarra on the wings supporting Jozy or, heck, Bobby Wood up top for the second half. Give those youngsters a chance even if it's against a second string lineup, because after all, it's a friendly and the results don't matter. Ireland is resting or sending home several of it's starters and rotating the squad and I'm completely fine with that, the United States should do it too. It just would've made sense to rotate out most of your starters instead of the mixed lineup that Jurgen will deploy of veteran defenders with young midfielders.

Jones Nominated For US Soccer Male Athlete of the Year 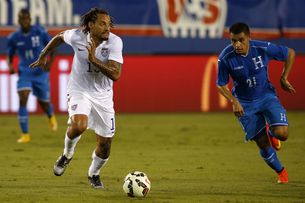 Revolution midfielder Jermaine Jones is one of six nominees for U.S. Soccer's Male Athlete of the Year Award. Seth has the details.

Now, I have all the faith in Klinsmann, and perhaps I'm still grumpy at the fact Nguyen only played 12 minutes, but I didn't see any kind of master plan for these two friendlies. There are a lot of MLS players involved in the playoffs and Eurpoean based players facing league play this weekend. I would've assumed that Klinsmann would've tried to maximize the impact of the four players who went back to their clubs in the first leg. But, I am not the head coach and my opinion means nothing. But I'd still like the national team to at least play well, win, lose or draw.

As far as Ireland goes, let the kids play. Rubin didn't train yesterday so let's assume he's out for the game and Nick Rimando is starting in goal:

Beckerman can come in at some point for Morales and actually play a legitimate holding role, Wondolowski, Jordan Morris from Stanford and Bobby Wood can figure out a way how to be the attacking three players up top/out wide off the bench. I'll even allow Klinsmann to swap his fullbacks even though I think it's a silly idea to have Chandler and Fabian Johnson play on their opposite sides, but again, it's a friendly. If it doesn't work out you can just switch them at some point. This is where experimenting is good, you're getting a lot of players experience and trying something new against a team where the result doesn't matter.

But against Colombia, that result should've mattered. That game could've been a great benchmark of where the USMNT stood following the World Cup, and as far as I'm concerned Klinsmann threw it away. And I'll never understand why, and I know Jurgen Klinsmann is smarter than me, and he sees what goes on in training, but there's a difference between trying something in training and seeing it at game speed. More often than not, I'd like to see him try and win some of these games from the start or at the very least make subs at halftime to adjust to the beatings his side is usually taking. Perhaps that Green-for-Yedlin sub was going for the win and it backfired spectacularly, fine, it happens. But to sit back and be proud of that performance against Colombia in any meaningful way, no, I'm sorry, I'm not having it. That game should've been a multi-goal loss.

I don't need results on the scoreboard, those don't matter. What I need to see from the United States going forward in these friendlies is something that resembles a good performance on the field. I don't need them to win, I just want to see them play effective soccer. Against Colombia, they were far from playing 90 minutes of good soccer.

Let's see what Jurgen has in store against Ireland.