Lee Nguyen only had 12 minutes for the USMNT against Colombia last Friday, but what he brought to the field in those 12 minutes should solidify his status with the national team going forward.

Tomorrow, the United States will play at the Republic of Ireland in the second international friendly of the weekend and the last game before the long January camp in the MLS offseason.

New England Revolution midfielders Lee Nguyen and Jermaine Jones will not play in that game, having been released back to their club for the upcoming Eastern Conference Final against the New York Red Bulls.

In last Friday's game against Colombia, Jermaine Jones played 90 minutes at centerback and did rather well considering the USA was under siege for seemingly the entire game. Lee Nguyen was subbed on in the waning minutes and did this:

Lee Nguyen in the game less than two minutes and already gives #USMNT its best look at goal all game. #USAvCOL https://t.co/QJO8XiYJOX

This is what the US needs from their central attacking midfielder. Pure play-making ability. Clint Dempsey brings this type of flair to the position and as much as I like Mix Diskerud, he hasn't been able to lay claim to the #10 spot that everyone keeps telling me he can play. I've yet to see it, but that doesn't mean that Diskerud is a bad player, on the contrary, he's going to get a ton of minutes in the upcoming 2018 World Cup cycle, but I doubt it will be in the playmaking role.

Lee Nguyen came on and nearly helped create what would have been an epic winner against a Colombian side that outplayed the Americans for seemingly the entire game. Just three minutes after being substituted on for Diskerud, Nguyen created the USA's best scoring chance, by far, in a game that saw them only have five shots on target. In total, Jermaine Jones had two shots along with Bobby Wood, who's outside-of-the-right-foot shot was saved in the above clip. The fifth shot for the USA? Jozy Altidore's early penalty, the only shot the American's registered on goal in the first half. 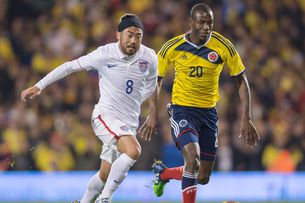 Jurgen Klinsmann has released Revolution midfielders Lee Nguyen and Jermaine Jones back to the club ahead of their MLS Playoff match this weekend.

And that's a huge problem for the USMNT if their central attacking midfielder isn't producing. And this isn't all on Mix, Fabian Johnson struggled on Friday as well and both US central backs, Jones and Brooks, were just bombing balls forward to relieve the tremendous pressure the American defense faced in this game. There were glaring tactical issues from that game that rest solely on Jurgen Klinsmann, and I think it's fair to say Klinsmann's 4-1-3-2 failed on Friday. But it could have been salvaged had Lee Nguyen been introduced sooner.

Lee has been in such fine form, his pass to Alfredo Morales came as no surprise to anyone in New England, who has seen him do this all year. For a game that desperately needed the type of creative and fast-paced play Nguyen provides, Jurgen Klinsmann didn't sub him in until almost the final ten minutes. I'll tackle that subject tomorrow in my USA-Ireland preview, but let's get into why the USA needed Nguyen desperately against Colombia, and why he's here to stay in Klinsmann's plans.

Take a look at Mix Diskerud's passes and Kyle Beckerman's during the Colombia game per the MLSSoccer.com chalkboard. (And yes, this tweet is for the sole purpose of to embed those two chalkboard in this post since my laptop hates me.)

Notice the problem? Diskerud is theoretically supposed to be higher up the field, but instead it looks like he was partnered with Beckerman in the two holding midfield spot Klinsmann usually deploys. Against Colombia, the US instead used two strikers, Altidore and Rubin Rubio and just one holding mid, Beckerman. 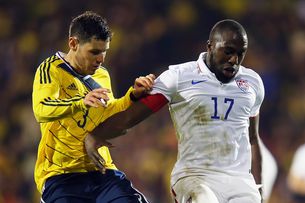 So the USMNT was not good last Friday, but it wasn't all bad as far as New England Revolution fans were concerned. Steve offers up thoughts on Yedlin, Rubin and Lee

This created a tactical mismatch, as the US had problems building out of the back with only Beckerman to provide support in front of the defense. This likely caused Diskerud to be sucked back, leaving the two strikers alone and unsupported in the center of the field. In order for a formation to work, it has to operate as designed, and with Diskerud not acting as anything remotely resembling a #10 playmaker, the US struggled mightily to create chances and get shots on target.


Enter Lee Nguyen, who has no problems with his positioning in his preferred central attacking role. Diskerud in 78 minutes completed zero passes into the Colombian penalty area, Lee had one, and set up another to Morales in 12 minutes and stoppage time. Why? Because he already knows how to play his position.

See this every week in MLS from Lee Nguyen, getting between lines and causing problems. Good showing for him tonight. pic.twitter.com/DcPhRw6fuX

There is no one better in MLS at finding space between the defensive and midfield lines than Lee Nguyen right now. If Mix Diskerud wants to play the position that his jersey number indicates, he's got to be able to get into spaces like this and create from them. So far, when asked to be the focal point of the USMNT attack, Diskerud has struggled, and therefore the USMNT has struggled. In such a critical position for the USA, Diskerud has always seemed stronger in a supporting role rather than a creative one, and he could very well be a partner for Michael Bradley in the holding midfield role going forward.

But right now, aside from Clint Dempsey, there's no one better suited for the #10 role in the US player pool than Lee Nguyen. And while Dempsey is still perhaps a striker at heart, Nguyen is a pure midfielder that just happens to have the finishing prowess right now, rivals any American player. Going forward, Lee will surely have an invite waiting for him in January as Klinsmann and the United States hold their large, offseason camp. It will be there that Nguyen will have another chance to make an impact and leave a lasting impression on Klinsmann and the coaching staff.

Until then, Klinsmann and Co. will just have to watch the Revs in the MLS Playoffs to get a firsthand account of what Lee can do on the soccer field. Or they can watch that vine above on replay for the next two months, since that's all Revs fans are going to do anyway.