MLS Playoffs 2013: Analyzing the Revolution's Schedule and Chances in the East

The loss to Chicago on Saturday put a serious, serious dent in the Revolution's playoff hopes, knocking them back two places and putting both the Fire and the Dynamo in advantageous positions. A recent article on the league website highlighted the remaining schedules for each team; here's TBM's deeper analysis.

Share All sharing options for: MLS Playoffs 2013: Analyzing the Revolution's Schedule and Chances in the East

John Bolster of mlssoccer.com recently penned a piece analyzing the path to the playoffs for all of the bubble teams in both conferences, trying to get an idea of who has the harshest schedule in the stretch run. Included among those teams, of course, was the New England Revolution.

The Western Conference race is completely irrelevant to us, so let's stick with the East for now. The following is the upcoming schedule for each Eastern Conference fringe contender, taken directly from that article:

The Chicago Fire and Houston Dynamo currently occupy the fourth and fifth playoff spots in the East, with the Philadelphia Union just ahead of New England in sixth. The Columbus Crew is in eighth. The Revs are two points ahead of the Crew with a game in hand, and two points behind Philly and Chicago with a game in hand on Philly. They are three back from Houston. As you can see from the standings screenshot below, they also have the goals-scored advantage over all four clubs. 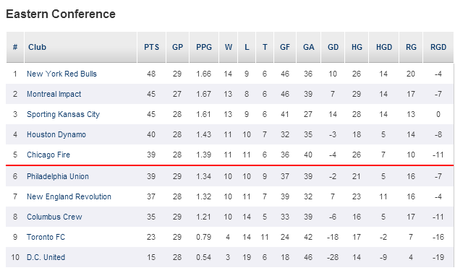 First, let's point out the obvious. There are three six-point swing games between the Revs and their nearest playoff competitors from here until the end of the season. The Revs will face Houston at home on October 5th, and have back-to-back outings against Columbus, home and away, to close out the season. Even with Columbus looking down and out (four points back, low on goals scored and only five games remaining instead of six), these matches are must-wins for the Revolution, if nothing else.

The Revs also have a home tilt against D.C. this weekend, which is another must-win. The Revs are about the only team in the league who have struggled with United this season, and if they can't put them away at home during crunch time, the Revs don't deserve to make the playoffs. That's three points that just have to happen.

Going down the list, Columbus is not only in a hole, they also have probably the hardest remaining schedule. Two matches against New England and games against Chicago (another six-pointer) and SKC will be no walk in the park, even if they play three of their last five matches at home. Really, though, it's the fact that they're already so far behind that makes this so difficult for them.

Houston edges out Philadelphia in strength of schedule to be next in the list, due to their two CONCACAF Champions' League clashes in the next month. In terms of MLS play, they play four of their final six at home, and their opponent list includes Chivas USA and D.C. However, they also have to face the Revs in Foxboro, and Montreal, SKC, and New York, albeit at home. Couple that with a cluttered week between the Chivas and New England matches and a 2400-mile-plus round-trip to Panama sandwiched between a home match to New York and away match to D.C., and Houston stands seriously susceptible to fatigue and collapse.

Philadelphia is next, with a schedule arguably made harder than the Revs' by virtue of their being fewer games to make up ground. They also only play two at home, but one of those is against Sporting KC. Matches against United and Toronto each do little to lessen the blow of having to deal with Sporting twice, and especially having to travel to Canada to take on Montreal.

New England is next, and while I have them listed at fourth out of five teams in strength of schedule, it's by no means a walk in the park. They have three home and three away matches, which is helpful as the Revs are better at home, but those away matches include trips to Montreal and New York. The home tilts are D.C., Houston, and Columbus, fixtures that are always tricky for the Revs, even if D.C. - and to some extent, the Crew - are not particularly good sides. Anything less than nine points from nine at home will likely see them eliminated from contention.

Chicago has the easiest path to the playoffs, and after having a win handed to them by the linesmen beating the Revs 3-2 on Saturday, they've put themselves in a position where only their own inconsistency can destroy them. They have two home matches and a staggering four away matches left, but those away matches are to Columbus, D.C., Dallas, and New York; only two of those sides are above the Fire on points, and a loss to Dallas does not carry with it the unfortunate side-effect of bolstering another Eastern Conference contender's points total. A home clash with Montreal will be difficult, but facing Toronto at home will be a welcome respite and should represent an automatic three points.

Last season, the fifth-placed team in the East totaled 53 points as Houston beat out Columbus by a solitary point to clinch the playoffs. Unfortunately, that would require the Revs to secure 16 points from a possible 18 to qualify. However, this year's playoff race is not last year's; one or two stumbles from teams like Houston and Chicago can open a spot into which the Revs can easily slip. Philadelphia has been approaching free-fall since the summer months, and again, Columbus appears to be out of it (knock on wood).

The Revs need to be perfect at home. They can't count on a winning road performance to make up for any missteps at Gillette now. However, just winning at home and not losing on the road may not be enough; twelve points gets them to 49, a total that Houston can eclipse with three wins and a draw, Chicago with three wins and two draws, and Philadelphia with the same. That also assumes that the Revs retain the lead in goals scored, which is not guaranteed when their rivals have leaky defenses like Chivas, D.C., and Toronto against whom they can pile up the goals.

New England's longest unbeaten streak of the season ran from May 11th until June 8th, at five games. Since then, they've been able to string together as high as a three-match unbeaten run only once. We have to assume that at least one loss is going to be mixed in somewhere, and even a 3-1-2 streak would be impressive.

The Revs have to do their work and do it well, but will still need to rely on other results to put them into the playoffs for the first time since 2009. It's certainly doable, but that would require the Revs to respond positively when it's all on the line, and that's something they haven't been able to do in years.