What better way to close out the first half of the MLS season than to beat the Earthquakes and, at least for a couple hours, sit in a playoff spot? Yup, it was pretty nice. Here are some thoughts on the game that was.

The New England Revolution sorely needed a dominant and decisive win this weekend to stop their winless skid, and that's exactly what they got. At the beginning of the season, who'd have thought that by summer we'd be beating last year's Supporters' Shield winners without the likes of Kalifa Cisse or Jerry Bengtson? I sure didn't, but you won't hear me complaining.

For me, Chad Barrett was one of the most impressive players on the field all night. He gave the San Jose backline fits constantly through the first half and was almost a part of two goals that were just out of Diego Fagundez's reach. His determination to impress surely did not go unnoticed, and I believe his game on Saturday speaks volumes to the New England Revolution's philosophy this season. 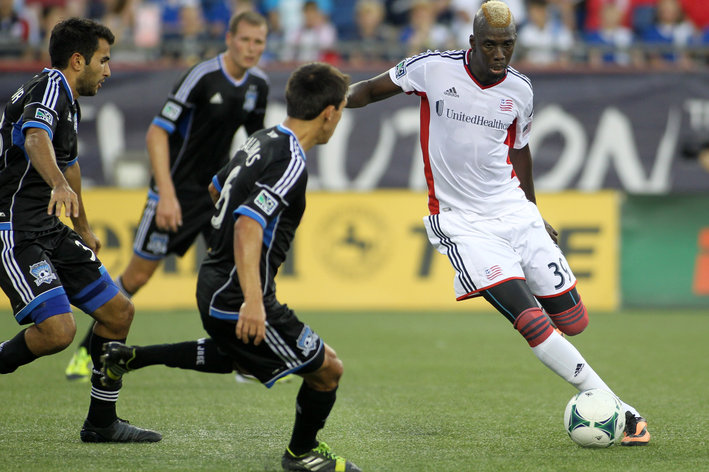 Barrett's storyline coming into this match really says it all about the team that Jay Heaps has assembled this season. Heaps and his staff have not only done a great job as putting together a wonderfully deep and talented squad, but the competition for minutes appears to be so competitive that opportunities are rarely squandered. In Chad Barrett's case, you can see this at work quite clearly.

Just as Barrett stepped up in a big way, as did Lee Nguyen, who has been rather inconsistent this season. At times, Nguyen can drift out of games, often due to coverage by opponents. But when he finds his way into a game, THAT is when the Revs excel. Simply put, when Nguyen is at his best, those around him are at their best as well. Against the Earthquakes, players like Saer Sene, Kelyn Rowe, and even Scott Caldwell benefitted from playing complementary roles to the on-point Nguyen. And his two assists just go to show that he's still just as dangerous as ever, and clearly one of the most important fixtures in the Revs midfield.

Perhaps more important than the Revolution attack clicking once again is the fact the the defense got back to it's stingy ways. Adding yet another notch to their belt, the Revs now lead the league in shutouts with 10 total. By my math, the next closest is Portland with 8. For this New England team, led (and captained) of course by the Portuguese prodigy, Jose Goncalves, the backline is just as integral to their showing up in the ‘W' column as scoring goals. Goncalves has every bit to do with their success this year, and if I were the Revolution Front Office, I would be doing everything I can to turn this loan into a permanent move.

But the form of Goncalves' defensive comrades, Chris Tierney, Andrew Farrell, and Stephen McCarthy, is not to go unnoticed. They have all had their great moments over the first half of the season, and the way they played against San Jose might just be their best yet.

Yes, I'm oozing with optimism this week, and I don't care. The sting of being knocked out of the Open Cup has finally worn off and I am ready for the second half of the season. With the MLS transfer window opening tomorrow, I do expect to see some moves made by the Revs. But whatever happens, all we can hope for is that the transfer window does not create too much distraction for this squad which has tremendous momentum right now.

That said, there are some serious question marks surrounding this team that need to be addressed. The departures of Kalifa Cisse, Jerry Bengtson, Saer Sene, and Juan Agudelo are all possible at this point, though some more probable than others. The Revs have some work to do, but keeping this momentum is paramount.

This convincing win successfully restored my faith that this team just may be able to squeak into the playoffs after all. Now that we are officially into the second half of the MLS season, it's going to be a dogfight from here on out. After July 17th game against the Colorado Rapids, the Revs' remaining opposition is strictly from the Eastern Conference. We've been keeping pace so far, but now is the time to start climbing up the table. Defeating the Houston Dynamo at home this weekend will be a good first step towards accomplishing that.