2013 Gold Cup USA: Has Michael Parkhurst Earned a Start at RB for a World Cup Qualifier?

Former Revolution defender and 2007 MLS Defender of Year has struggled to see action with the USMNT, but will his strong performance in the Gold Cup put him at the top of the USMNT depth chart at right back for qualifiers this fall?

Share All sharing options for: 2013 Gold Cup USA: Has Michael Parkhurst Earned a Start at RB for a World Cup Qualifier?

Just a few short months ago, the United States Men's National team was in disarray. They had lost their opening game in the The Hex to Honduras, the team looked like a disorganized mess with no real idea of how to play out of Jurgen Klinsmann's now-juggernaut 4-2-3-1.

Now, the USA has won 11 straight international games in all competitions - World Cup qualifiers, friendlies and of course the Gold Cup. And while everyone will talk about the depth of the USMNT and re-emergence of players like Landon Donovan, Kyle Beckerman, Alejandro Bedoya, like in Connor Walsh's recent post for The Yanks Are Coming, few have mentioned the job that Michael Parkhurst has done at right back, a much-maligned position for the USMNT in recent months. 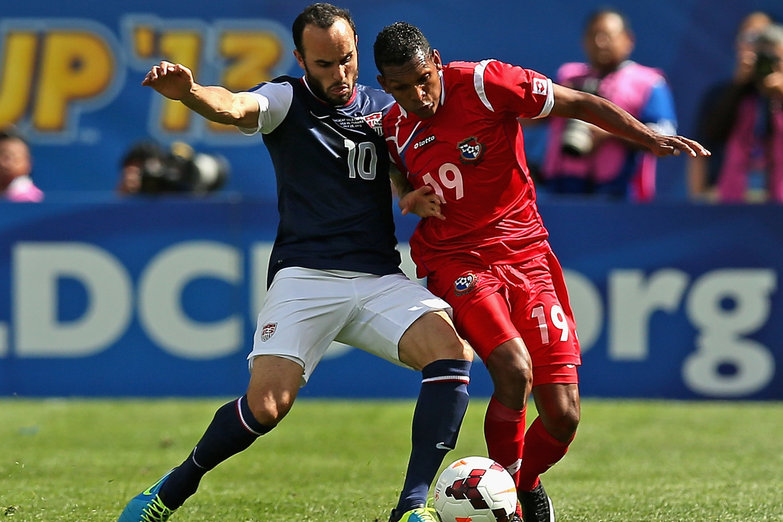 Brek Shea scored the only goal of the match, but it was enough as the United States defeated Panama to claim their 5th CONCACAF Gold Cup championship.

Before anyone suggests otherwise, I am NOT saying that Parkhurst is going to start for the Yanks next summer in Brazil. It's too far away to make that kind of statement. What I'm here to do is compare and contrast what Parkhurst did in the Gold Cup vs. what the other US right backs have done in qualifiers. Because I'm not a fan of the USA running through right backs like tissues, I'd prefer one guy to own the spot for the rest of the qualifiers, and that might not be Parkhurst, I'm just going to make the case for him.

See, I'm a big fan of Parkhurst. Not because he's a former New England Revolution guy, or that he's from the region, although that helps. Parkhurst was one of the best defenders in MLS during his time as a Rev. He won back-to-back MLS Fair Play awards as a defender in 2007-8, which is pretty much unheard of for a center back, since they usually commit a ton of fouls. And since I'm a big fan of Parkhurst, I want to see him play for the USMNT.

Parkhurst moved to Europe in 2008, moving to Denmark's FC Nordsjaelland before a move to Bundesliga side Augsburg in December. Parkhurst enjoyed great success at FCN, where his club won two Danish Cups and qualified for the Champions League by finishing second in the Danish Superliga after several years appearing in the Europa League. So why can't Parkhurst, who's playing in Europe in a fairly good league and in European competitions, break into the starting lineup for the USMNT?

FCN uses the same 4-2-3-1 formation that Klinsmann uses, and over the years Parkhurst has moved out wide to right back and also spent some time in central midfield. Yes, Parkhurst dealt with injuries in the 2011 season, the only year since 2007 that he has failed to play internationally with the USA. But that was a few years ago, and he's clearly healthy now, so why isn't he getting more time with the senior team?

Because in the first six games of The Hex, the United States has started three players at right back: Timmy Chandler vs. Honduras, Geoff Cameron vs. Costa Rica and Mexico and Brad Evans vs. Jamaica, Panama and Honduras in June. Parkhurst was an unused substitute in four of those matches. What should be most telling is that for the June qualifiers, Parkhurst, a natural defender, couldn't beat out utility man Brad Evans for the starting right back spot.

Again, Klinsmann has proven that he knows what he's doing with his personnel. He's made adjustments not only to the roster but also tactically. Case in point, the starting right side against Honduras in February was Danny Williams and Timmy Chandler, who (thankfully) haven't been called up since, as far as I know, for a variety of reasons. In that game Williams was useless, not spending any time at the right midfield spot, and Chandler is just a lousy distributor of the ball when wearing a USMNT shirt. It should be known that I'm not a personal fan of either of these two players, and was ecstatic when Klinsmann moved away from them both.

Now, the Geoff Cameron experiment at right back has always been deemed a failure, and I actually disagree. Cameron is probably the best player suited for the position the way fullbacks/outside defenders are used today, supporting the attack and venturing deep down the line in the attacking third. DaMarcus Beasley and Fabian Johnson excel at this on the left side, yet for some reason the USA just can't get it to click on the right. But Cameron, in the snow against Costa Rica and in Azteca vs. Mexico, was the one right back who ventured forward and at least attempted to put crosses into the box.

Of course, Cameron lost his starting spot to Brad Evans after a poor game against Belgium defensively which, to be fair, was pretty dismal for everyone. Belgium is really, really good right now. But Evans was thrown into the line-up for the second friendly vs. Germany and then all three June qualifiers while Cameron made a substitute appearance and a spot start at defensive mid for the injured Jermaine Jones.

Evans was able to handle his defensive responsibilities well, and of course, who can forget his game winner against Jamaica in stoppage time. But Evans has been lacking when going forward, aside from a handful of unsuccessful crosses and long-throw ins. Although he showed improvement in his last game against Honduras, most of his passes tend to be near midfield and they are either going lateral or backwards.

Now take a look at Parkhurst, who had two assists in the Gold Cup; one each against Belize and El Salvador. His heat maps show him getting farther up the wing than his countrymen during the qualifiers and providing more service into the box. This shows the same type of support that DaMarcus Beasley usually gives on the left side, overlapping with Fabian Johnson, among others.

Also worth mentioning, even though he's likely buried deep down on the depth chart, is Real Salt Lake's Tony Beltran. His game against Cuba was also very solid. It was the only game Parkhurst didn't start in the Gold Cup, played at Beltran's home of Rio Tinto Stadium. Beltran also had a ton of touches in the Cuban half of the field.

Now, I don't expect Parkhurst to be Beasley, who's a converted midfielder who moved back and has been a revelation for the USMNT this year. Parkhurst is a converted center back who's moving out wide, so his focus should be on the defensive end. But the position of fullback or wide defender is changing, and they're being asked to support the attack more often. And Parkhurst did a fairly good job at this in the Gold Cup, though it was against weaker teams than Chandler, Cameron and Evans faced in the qualifiers and friendlies.

But the kicker for me was in the second half of the final. As the USA was dominating possession, they were able to adjust and move their fullbacks farther up the field. This allowed Parkhurst to move up and support Bedoya on the game winning goal. It was Parkhurst who corralled the clearance from the Panamanian defense after an Eddie Johnson cross, and then Parkhurst's run to space that dragged a defender with him, creating more than enough room for Bedoya to center a dangerous ball into the box. Landon Donovan missed, but with two defenders looking at him, it left Brek Shea wide open to tap in on the goal line.

It's little things like Parkhurst's run that get noticed, as Eric Wynalda said during the commentary behind Gus Johnson's play-by-play. It's also little things like that run that can make the difference in a soccer game. Or a Gold Cup final. Or a player's international career.

Now again, I'm not saying Parkhurst is going to be starting in Brazil next summer. But I think his performance in the Gold Cup should give him a look at the next two qualifiers for the USMNT in September, at Costa Rica on the 6th and vs. Mexico from Columbus on the 10th. Throw in the friendly at Bosnia-Herzegovina on August 14th if you want as well.

I think Parkhurst has waited behind players like Steve Cherundolo and Timmy Chandler too long. Newcomers like Seattle's DeAndre Yedlin and the Revolution's Andrew Farrell won't (or shouldn't) be included in this World Cup cycle. That's forced Jurgen Klinsmann to select players that aren't normal right backs to play during qualifying. Evans, Cameron and Clarence Goodson (he played so well in the Gold Cup) should be in the mix as well with their recent performances. And Parkhurst is at least a natural defender. He's been in the system waiting for a chance and he just got it. Let's see if he can do it against CONCACAF's best in the coming months. If he can't, then he's probably back on the bench or not making the trip to Brazil.

Again, a lot can change over the next calendar year. Parkhurst is playing on a new team in a new league and he could struggle or pick up an injury. But for the next few months, I say give Parky a shot to lock down the right back position. If he loses it out to someone else down the road, at least he had his opportunity. Bob Bradley liked to cap a lot of players and Jurgen Klinsmann is no stranger to changing his lineup almost every game.

Maybe, Parkhurst can give some stability to the only position on the USMNT's suddenly revamped defense. Beasley, Omar Gonzalez, Matt Belser, Parkhurst.

Pretty sure the USA can do a lot worse than that.