For the first time all season, the Revs have managed to occupy a playoff spot for more than a few hours. Now they have the task of keeping it for 13 more games, all against Eastern Conference opponents. Maybe the things that went right (and some of went wrong) on Saturday vs. D.C. United will give them the tools they need to succeed.

At the start of 2013, there were a handful of likely candidates poised for breakout seasons; among them were Diego Fagundez, Kelyn Rowe, Juan Toja, and Jerry Bengtson. Some have quite obviously lived up to that promise already, while others have of course fallen quite short. But, among those who were pegged for success this season, did anyone think that we'd be talking about the emergence of Dimitry Imbongo?

Imbongo is quickly becoming the offensive spearhead to the Revolution attack that we've been looking for all season-and maybe even longer. With great physicality and hold-up play coupled with finesse and vision in the final third, the Frenchman is making things happen for New England lately. He may only have 3 goals in MLS play so far this season, but even when he's not finding the back of the net he is creating key opportunities for the Revs. Last week in Columbus, for instance, it was his agile 1-on-1 maneuver and shot that forced the game-winning corner kick for New England. Against D.C. United on Saturday, he not only found himself at the end of a Chris Tierney cross for the equalizing goal, but he also fed Kelyn Rowe a picture-perfect pass in the penalty area that was just barely stopped by goalkeeper Joe Willis. These are just a few examples of his positive contributions. 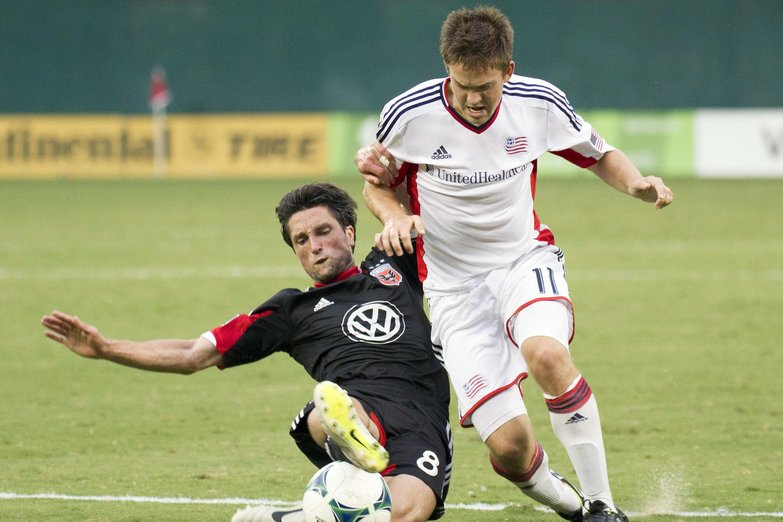 The Revolution overcame a slow start to turn around and earn a valuable road victory over D.C. United on Saturday night.

If he can keep it up, Imbongo might find himself firmly ensconced in the Revolution starting XI, at least until Juan Agudelo is back to full fitness. While Agudelo is still on the mend, however, Jay Heaps has certainly found his replacement in Imbongo, and the results are really coming through for him now.

The win against D.C. United was more than just the Imbongo show, of course. Impressive outings from Andrew Farrell, Chris Tierney, Kelyn Rowe, and Saer Sene are all a part of the victory as well. Saer Sene, in particular, might even have had his best game of 2013 on Saturday. The towering striker-turned-winger was catalytic in his role on the attack and it was his efforts that not only kept the Revs in the game in the second half but also set up the game-winner. He was 22/30 in his passing and showed a willingness to help out on defense. His stats also show that he won 3 headers on the night, something he used to shy away from in 2012. Though modest, his stats reflect an all-around successful night, and it's exactly that kind of game that the Revs needed out of him (and will continue to need out of him down the stretch).

Individual performances aside, the Revolution proved for the first time this season that they can successfully orchestrate a come-back. Prior to Saturday night's game, the Revs' previous 7 wins were all secured by way of a shut-out. Therefore, with this stat in consideration, Luis Silva's 8th minute goal was a true test for the Revs, and they were able to overcome it. This is a vital quality that New England had not shown to possess up until now, and it is one that they'll need to reflect on and learn from as they look to keep their 5th place playoff spot.

And while we're on the topic of learning lessons, the Revs would do well to practice their long-range shot stopping. And arguably no one needs to work on this more than Bobby Shuttleworth. Shuttleworth has now been beaten by long-range blasts from over 20 yards out in 4 of the Revs' last 6 games. Laurent Courtos, Adam Moffat, Nick LaBrocca, and Luis Silva have all figured out how to unlock the Revolution's stout backline and golden-glove candidate goalkeeper. If New England can't find a way to shut-down these types of opportunities, they will continue to be undone by this fundamental short-coming in their game.

Part of the equation just might be the player occupying the defensive-midfield role. Whether it's Scott Caldwell or Clyde Simms, the deep-lying midfielder typically occupies the space between the 25 and 50 yard lines. While the task of stopping long-range shots doesn't fall solely on them, there is certainly room for improvement, one could argue, in ensuring that these types of players are being covered by the defensive midfielder on opposing counter attacks. With Kalifa CIsse seemingly staying put as the summer transfer window approaches its end, perhaps he can find his way into the Revolution first-team lineup and show that he can stop these kinds of chances. Could a 3-way battle for the position soon be at hand? We shall see (but probably not, I would guess).

Indeed, there has been little-to-no activity for the Revs in this transfer window thus far. General Manager Mike Burns did state at the opening of the window that the club was looking at some players but that there was no intention of signing someone just for the sake of signing someone. And, despite some tough losses in the past couple weeks, Jay Heaps and his squad might just be proving that they have enough to make it to the playoffs without any further additions. But, if you ask me, teams are only going to get hungrier for a playoff spot in the tight Eastern Conference, and it's more likely than not that reinforcements are going to be needed.

Whatever happens this summer, the Revs will have truly an up-hill battle to keep their playoff position. Many if not all games from here on out will be pivotal in terms of staying in the running for a post-season berth. Upcoming games against the Houston Dynamo, Philadelphia Union, and Chicago Fire in particular will be crucial must-wins. And then there's the final two games of the season against the Columbus Crew to consider as well. Buckle up, kids, it's going to be a bumpy ride. But for the first time in a long time, there's a legitimate ray of hope shining on the New England Revolution this season.