Revolution Strikers and Coping With the Loss of Juan Agudelo

The Revolution have a void to fill with the coming absence of Juan Agudelo. It will be up to Chad Barrett, Dimitry Imbongo, or Jerry Bengtson have to step up to compensate.

Share All sharing options for: Revolution Strikers and Coping With the Loss of Juan Agudelo

The New England Revolution's attacking woes had several causes against Chivas USA on Saturday night, but the most obvious was the absence of the injured Juan Agudelo. According to Jeff Lemieux, he's going to be out for a while, and the Revs certainly won't be able to force their way into the playoffs with limp performances like the one they put on in Los Angeles.

Somehow, the Revs will have to cope with the in-form striker's absence.

Three out-and-out strikers are on the roster and healthy at the moment: Chad Barrett, Dimitry Imbongo, and Jerry Bengtson. Saer Sene can also line up as a striker, but thus far Jay Heaps has elected not to use him in that role. Barring the unusual (though perhaps not unwelcome) decision to move Sene up top, Heaps will have to decide upon one of the first three to replace Agudelo. 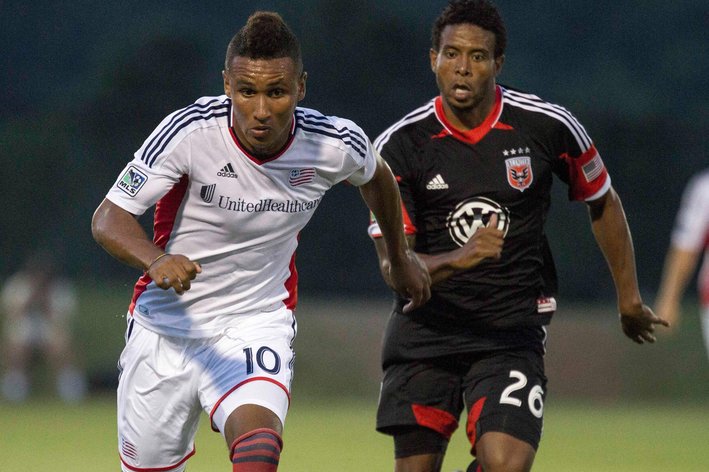 The Revolution injury report provided before the Chivas USA match was flawed, and it created a pre-kickoff stir on Twitter. Turns out there's a perfectly reasonable explanation for all of it.

After the Chivas match, Barrett makes a compelling case. The goal was just his second in MLS play this season, over six appearances. However, he's done that (and added an assist) in just one start, with only 110 minutes played. He certainly seems to be making the most of his time on the pitch, and his physical, forthright style would play well in a lone-striker set-up.

However, Dimitry Imbongo probably has the best chance of the three. Heaps has already shown a predilection for the bruising Congolese-born striker, and before Agudelo joined the squad he seemed to be well on his way to replacing Bengtson in the starting lineup. At least for next weekend's match against San Jose, Imbongo is a good bet to at least see the field, if not start.

Finally, there's Jerry. In the court of public opinion, Bengtson's days as a starter are long over. While Barrett has been so efficient with the minutes he's played, Jerry has just a single goal in 12 appearances. Where Imbongo brings endless graft, determination, and raw physical power to the attack, Bengtson's efforts appear to wane as his frustration grows. And then, of course, there's the fact that he's dealing with a goal drought of around 868 minutes.

Regardless of who gets the nod, it will be an important opportunity for any one of the three to prove to Heaps that his trust would not be misplaced while Agudelo remains injured. Imbongo would reaffirm his coach's faith, Barrett would validate his efforts as a substitute, and Bengtson would finally end his horrendous run of form. The choice will be integral to New England's form over the coming weeks.