Revolution 1-1 Chivas: Player Ratings and Man of the Match

The Revolution drew Chivas USA 1-1 in California this past weekend. It wasn't a well-played match overall, but several Revolution players had decent performances, while one or two missed opportunities to impress the coaches and make a claim for more playing time.

Share All sharing options for: Revolution 1-1 Chivas: Player Ratings and Man of the Match

Steve: Five save evening is always good for a keeper. Tough to blame for the goal, otherwise pretty solid...Corey: I thought he actually made some pretty impressive saves when the Revs had their backs against the wall. Still, not his best outing - we've seen better...Jake: Can't fault him for the deflected goal though, perhaps maybe for only being able to punch the initial shot. Another awkward moment that led to a Chivas corner but otherwise a quiet day.

Steve: Got a workout in, and excelled. Careful with the ball, dangerous deliveries, conscious of his defensive duties...Corey: A very good game from CT. Stuck to his defensive duties well and was involved in the attack combining with our left-sided midfielders, something I've missed from last year...Jake: Might be Tierney's best game of the season, great two-way play, unlucky the Chivas goal came off him. I'd love to see him move up to LM if Heaps can find someone to play LB. 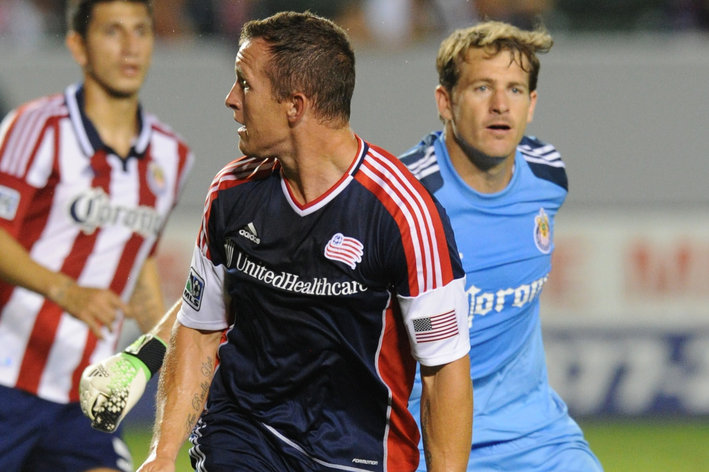 Full pre-match, in-match, and post-match coverage of the Revolution match against Chivas USA on June 29th

Steve: Attempted 79 passes, which tells you everything you need to know about this game and how the Revs played into Chivas' hands. Solid showing...Corey: Simply put: good not great. That said, is the perfect captain for us right now...Jake: Like how he got forward, especially late. It was his near post run that drew two defenders leaving only one to cover Barrett on the equalizer.

Steve: When a guy like this is unmarked at the near post on a corner, and gets a head to the ball, he needs to score. End of story...Corey: Better game than he had against Vancouver. Want to see him be more effective on corner kicks...Jake: Like how he got forward, especially late. It was his near post run that drew two defenders leaving only one to cover Barrett on the equalizer.

Steve: Torched by Villafana a few times. Rating is slightly unfair to him, because he's not a right back and shouldn't be playing there...Corey: I can't fully blame him for his outing at RB, which we all know he really shouldn't be playing. It was a night to forget for Guy, but kudos to him for doing his best...Jake: He's not a right back, played too far up the field most of the time. Did have several blocked crosses.

Steve: Classic Simms performance, covering ground and careful with the ball. Just not quite enough for this type of match, though...Corey: Not my favorite Simms outing, didn't look fully fit. Struggled to track back at times, but provided good cover when the Revs were pushing up field...Jake: That was his chance to impress and he failed. Was he bad, not particularly, but Caldwell outclassed him in every way when he was subbed off.

Steve: Had the assist, but was incredibly sloppy passing and made an unforgiveable 22 turnovers. Looked lost at times...Corey: Chivas did a good job of keeping him quiet, at least until the late stages. Once he moved over to the right, he looked way more comfortable...Jake: Assist boosts this a little bit but he didn't have a great game passing. Played much better when on the right side of the field.

Steve: Constantly driven backward, passing not clean, set piece crosses abysmal. Can't be this easy to neutralize him...Corey: A big part of Chivas' game plan seemed to be to cut him out of the attack. They succeeded...Jake: Spent most of his time working backwards, though that wasn't his fault. That FK off the bar was almost magical but why can't he hit a corner?

Steve: Passing was pretty good, but his involvement seemed inconsistent. Good in flashes, not so much in others...Corey: Not his worst night, but his passing was just a moment or two off from what it needed to be. Had some opportunities to open play up but his reading of the game wasn't as good as we've come to expect...Jake: Not a bad game, worked the whole field, generally passed well, just didn't have a lot of memorable moments.

Steve: There were moments where he got into dangerous positions, but much of the time he was an attacking black hole. 16 turnovers...Corey: Really really really really really really really bad outing for Sene. If you're going to put him on the right wing, then he's got to shoot the (expletive) ball. Also, he all but abandoned his defensive responsibilities...Jake: Can we end this experiment of Sene as a winger? He's so ineffective at the position it's dragging down the rest of the attack.

Steve: All would be different if Kennedy doesn't save the nutmeg shot, or if the ball played to him on the offside call is a fraction sooner. Alas, the life of a striker...Corey: Awful. Get him out of here. Regardless of whether he's being utilized properly or not, this dude has overstayed his welcome in New England and we need to be looking for his replacement ASAP...Jake: He's not getting service, and he's either not adjusting his game to get the ball or he just doesn't want to. At this point, he should be coming off the bench.

Steve: He missed one pass out of thirty. One. Showed vision that was lacking in deep midfield prior to his introduction...Corey: Had a HUGE impact on the game and really got things moving once he came on...Jake: Missed one pass in thirty minutes. Most of his passes were up the field/out wide and really showed off this youngster's vision.

Steve: Should have found more ways to get involved, but wasn't quite detrimental...Corey: Negated all the positives that Caldwell brought to the game. Looked slow and out-matched every time he had the ball...Jake: 15 minutes isn't a lot of time to make an impact especially in a very crowded midfield coming off for Guy as the Revs looked for an equalizer.

Steve: My hero. In nine minutes he doubled Jerry's shot total...Corey: SIGN HIM UP. Oh wait, he already plays for us. Dude has made his case, he needs to be starting. Especially now that he's proven to be better than Jerry in literally every way...Jake: Yes, he completely bungled home the goal. Who cares. Heaps needs to give this guy a start, two goals off the bench in very limited MLS minutes.