The Breakers and the 2013 NWSL Playoffs: Boston's Track to a Championship

Over their final seven NWSL matches, the Breakers will need to make up four points to earn a shot at the Playoffs. The Bent Musket breaks down the team's track to the postseason.

Share All sharing options for: The Breakers and the 2013 NWSL Playoffs: Boston's Track to a Championship

With just six-and-a-half weeks remaining on the inaugural NWSL calendar, six of the league's eight teams stand in playoff contention. Only four teams will qualify for the postseason - determined by total points at season's end - leaving the Breakers and Chicago Red Stars on the outside looking in. What can we expect from the Breakers and their fellow playoff pushers?

The Breakers opposed table-leading Sky Blue FC three times in the past three weeks, earning a loss, win and draw in the process. Along the way, Sydney Leroux's crew topped number two Portland Thorns FC in a 2-0 rout, proving the team can, in fact, hang with the league's top teams. What lies ahead for the Breakers? 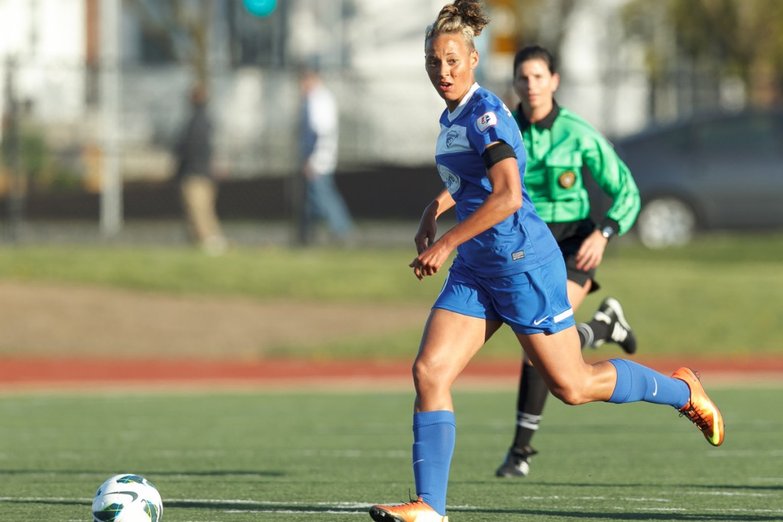 The Boston Breakers' vaunted attack failed to crack Sky Blue FC's defensive shell, forcing them to settle for a 0-0 stalemate.

Boston will not challenge Sky Blue again this season, though the team will play a total of six matches against the remaining playoff teams. Earning results during those matches will serve as a top priority for the Breakers, who need to make up four points to catch Abby Wambach's Western New York Flash, who currently occupy the fourth and final playoff spot. If Boston can maintain that distance - or continue to draw closer - the team will have the opportunity to control their own destiny; the Breakers will host New York on Aug. 3 before visiting the Flash for a nationally-televised season finale on Aug. 17.

If the Breakers can continue to turn out complete defensive performances, as they have during their previous four matches, Sydney Leroux, Heather O'Reilly and Lianne Sanderson will find the net often enough to earn points. The process seems simple, though results proved hard to come by before the addition of wing back Jazmyne Avant, who has mixed well with the offense while also holding firm on the back line. Boston's attack becomes one of the best in the league when Leroux and O'Reilly combine well; defensive support will make the difference.

The Breakers will play on if...Avant's back line can string together a series of complete matches, providing momentum for the Breakers' prolific attack

The Breakers will go home if...Avant's defense struggles to find consistency, and if the Breakers' frontrunners fall into another finishing slump