United States vs. Costa Rica Preview: Getting Back on the Right Foot

There's plenty of controversy surrounding the United States Men's National Team right now, but none of that is as important as getting a full 3 points against Costa Rica tonight and righting the ship. We take a look at the match-up and speculate as to who Jurgen might plug into the Starting XI.

Share All sharing options for: United States vs. Costa Rica Preview: Getting Back on the Right Foot

Although the headline-grabbers this week have largely been in reaction to Brian Straus' "Friendly Fire" piece on AOL Sporting News, where 11 "whistle-blowers" among the U.S. Men's National Team were cited as being discontent with the way Jurgen Klinsmann is currently running the show, what's important to keep in mind is that we've got a game tonight, folks. And it's perhaps time to start focusing on that.

Klinsmann faces some tough decisions ahead of the United States' clash with Costa Rica, many of which are a direct result of the team's thin and inexperienced backline. With injuries abundant, Klinsmann has been left with a corps of defenders devoid of any substantial leadership or national team experience. In fact, 4 out of the 6 defenders called into camp are current MLS players with only a handful of caps between them.

Not only that, but perhaps the bigger problem falls on either side of that backline, where Klinsmann is left with essentially zero natural outside backs. Injuries to Steve Cherundolo, Fabian Johnson, Edgar Castillo, and Timothy Chandler will provide a hefty tactical challenge for Jurgen to conquer. Oh and let's not forget the exclusion of Carlos Bocanegra. But I'm not going to go there.

The rest of the field is (arguably) in much better shape. Veterans like Michael Bradley, Maurice Edu, and Jermaine Jones will provide a steady complement of grit and awareness in the midfield while Herculez Gomez and former Revolution star Clint Dempsey will help provide spark in the attack.

Questions still remain however, and they largely depend on just who takes the field in Denver tonight. For instance, will Klinsmann take another chance on Jozy Altidore, who has stumbled time and time again with the Nats despite a league best goalscoring record with AZ Alkmaar in the Eredivisie? And of course, if yes, will that risk finally reap some reward? Can Graham Zusi fill Landon Donovan's shoes and be the creative catalyst behind the U.S. attack? And speaking of filling shoes, can Brad Guzan effectively cover for the injured Tim Howard in goal? And where do Brad Davis or Sacha Kljestan fit into the picture? All tough questions with no easy answers.

So, how will Jurgen choose to lineup against Costa Rica exactly? Well, I thought I'd take a stab at a potential Starting XI: 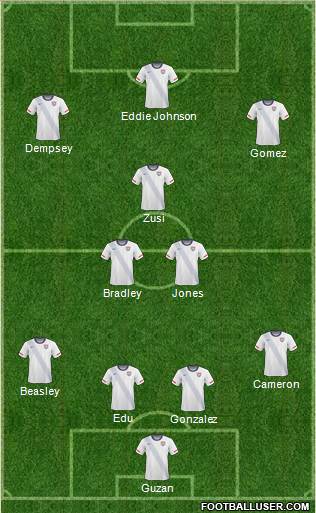 Along the backline, I believe Jurgen's best bet will be to play Edu at center back; he's shown that he can play there with success in the past and he can add a much-needed veteran presence to keep the defense in check. He'll partner with either Matt Besler or Omar Gonzalez; I'm going with the latter because of his height advantage when it comes to set pieces. Geoff Cameron will likely be slotted out at right back, where he has featured for Stoke City on occasion, and DaMarcus Beasley will probably get the nod at left back. Klinsmann has Justin Morrow and Tony Beltran at his disposal for outside backs, but it doesn't seem likely that either will start. But, hey, you never know. I wouldn't hate seeing Morrow on the left.

I have the stars and stripes lined up in a 4-3-3 with Eddie Johnson as the target man. Keeping him in that position allows him to capitalize on any and all service that gets crossed into the box. This could just as easily morph into a 4-4-2 with Johnson and Gomez up top, Dempsey at the top of the diamond, Bradley and Zusi on either side, and Jones as the defensive mid. However you slice it, this is a favorable lineup and one that should be able to handle Costa Rica, so long as they keep their heads in check and don't make any outrageously dumb mistakes.

Costa Rica's attack will be one to look out for, with or without the services of Real Salt Lake's Alvaro Saborio. Bryan Ruiz and Joel Campbell are still forces to be reckoned with and they will try to exploit our "B-Side" backline as often as possible. But if the U.S. can dominate possession and win the midfield battle, and if they can make the most of their chances, then this should be a manageable 3 points.

It's no secret that this game against Costa Rica absolutely must yield a result for the U.S., not only because of their fumble against Honduras last month, but because next Tuesday they will travel to the dreaded Estadio Azteca to play Mexico, which will undoubtedly be their most difficult task of the Hex. Against Mexico, it's hard to imagine that the United States will be able to leave with any more than a point (and really, a point would be truly lucky). So, Friday's match against Costa Rica is crucial.

Not only will a win be important, but a decisive win will go a long, long way. For the fans, there is a lot of uncertainty and, in some circles, doubt surrounding the state of our National Team. Brian Straus' article aside, there has been a dark cloud hovering ever since the Honduras match, and a convincing, dominant performance is a sure-fire way to get rid of it.

More than for just the fans' sake, a win will help this squad's confidence and allow them to make up for their shaky start to the Hex. Back-to-back losses are not what you want in the rear-view when you head into Mexico City. Getting back on the right foot is absolutely crucial for the USMNT right now, and the path to do so starts tonight in Denver. I have every bit of faith that they can, but I'm curious to see just how they do it.