An ugly, sloppy, chippy match led to an inevitable defeat for the boys in blue. Losing hurts, but hey at least it's not like we lost to an actual rival, right? Come commiserate with us.

Well, it was inevitable, right? I mean, we were bound to lose at some point.

But really, this match wasn't so terrible. Sure, we lost. But if you couple it with the Chicago game, 3 out of 6 points on the road to start the season is nothing to sneeze at. Hooray silver lining! And really, with the weather and the sub-par refereeing, I'm not losing too much sleep over this one.

There were, afterall, some positives to take away. What I think was most encouraging was the Revolution's dedication to their new season resolution of playing more physical. Philadelphia had no problem pushing us around, even from right out of the gate. But the Revs pushed right back every time, and that's something that we should expect to see moving forward through the season. This team seems on-board with the let's-not-get-bullied-anymore mindset. Hallelujah.

First the good. Juan Toja was once again a free-roaming jack of all trades, playing in the middle as well as on both wings while also tracking back on defense a great deal. He showed tenacity and bite, and was a constant danger for the Union midfield and backline. In fact, take a glimpse at his stats and heatmap from the game courtesy of MLSsoccer.com's ‘chalkboard' feature: 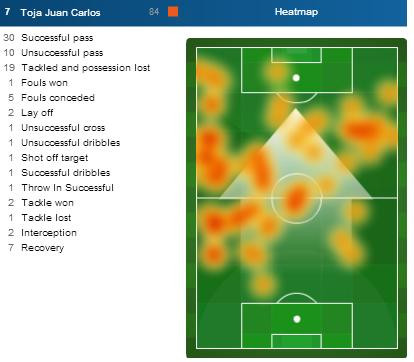 As you can see from the heatmap alone, Toja was all over the pitch. You'll notice that the majority of his time was spent to the left side of the midfield. What this says to me is that he and Nguyen were sort of swapping at will to keep the defense guessing. Where you don't see much activity, however, is in the middle of the attacking third. If he was truly being employed as a second striker or #10 then I think we'd see more in this area. But it seems to me that Jap Heaps prefers Toja to move more horizontally or end line-to-end line rather than box-to-box, which allows Kelyn Rowe and Lee Nguyen to pinch in and take their chances at goal.

The problem with this plan of attack, however, is that we didn't really see much of that in action on Saturday. Rowe was largely invisible and Nguyen was the playmaker rather than a shot-taker. Perhaps Heaps may want to consider moving Toja to the left and playing Nguyen in the middle. Just a thought.

Which brings us to Rowe. The prolific sophomore may have played his way into a starting role after his assist against the Chicago Fire, but his outing against the Union might have played him right back to the bench. This isn't necessarily a bad thing, of course. Rowe might just be the ace up our sleeves this season, coming in as a super-sub to inject new energy to a lifeless or stagnant attack. For me, nothing about his game on Saturday showed that he is necessarily ready for the starting gig (though I will say that he did well to track back on defense on a number of occasions). Here's hoping that he'll find his groove this season. I'm sure he will (right?).

Moving onto Chad Barrett; this dude needs more playing time. He's looked fit and energetic in the limited time we've seen him so far. He has already demonstrated his hold-up capabilities, and with more playing time could just be the target-man we're in need of. Let's face it, the Revs do not have a presence in front of goal--we have no Jack McInerney equivalent. Barrett feels like the prime candidate for a start against Sporting Kansas City this weekend, especially with Jerry Bengtson expected to be absent due to World Cup Qualifiers, to see what he can really offer.

And speaking of Jerry, I'm finding it hard to excuse him for that wasted opportunity on goal in the 35th minute. Those are the situations that need to be easily handled by a DP striker in MLS (unless you're Sherjil MacDonald, I guess). As many others have said already, the Revolution are going to constantly find themselves in games and situations where they can only generate a handful of opportunities. It's Bengtson's job to take advantage when those opportunities come. I'm willing to give him the benefit of the doubt (it's only game number 2, after all), but too many more of those and we just might see another DP on the bench for the 2nd season in a row.

All in all, this game was a slugfest from the first whistle to the last. It was wet, cold, and ugly. Could we have taken a point? Sure. 3 points? Maybe. But there's too much work still to do. It's a long season. There's still plenty of good reasons to keep hope alive. But we've got to sort these things out now, not later.