Revolution vs. Union 2013 Lineups: Injuries Get Caldwell, Shuttleworth into the Starting XI

The Revs will employ the same formation but with 3 notable personnel changes. Scott Caldwell and Bobby Shuttleworth make their 2013 Revolution debuts while Kelyn Rowe slots in at right-midfield in the Starting XI.

Share All sharing options for: Revolution vs. Union 2013 Lineups: Injuries Get Caldwell, Shuttleworth into the Starting XI

Jay Heaps is sticking with the same formation as that which won against the Chicago Fire last weekend, but with some personnel switches due to injuries. Both Matt Reis and Kalifa Cisse were forced out of the Starting XI this afternoon, resulting in Heaps to replace the duo with Bobby Shuttleworth and rookie Scott Caldwell.

Caldwell is used to being employed in a more attacking role, but today he will need to get into a defensive state of mind as he pairs with Clyde Sims in front of the Revolution backline. Kelyn Rowe also finds his way into the STarting XI after notching an impressive assist in last weekend's win.

Chris Tierney finds his way to the bench this week after being out last week as he was continuing to recover from his pre-season ankle injury. Also on the bench is 3rd string keeper Luis Soffner, Darrius Barnes, Donnie Smith, Diego Fagundez, Chad Barrett, and Andy Dorman. 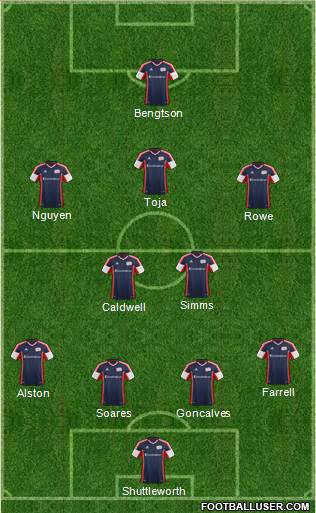 Don't forget to join us for the Live Game Thread at kick off!