Width, Balance and Asymmetry are all-important for New England in 2013. Here is an in-depth look at what to expect tactically out of the Revolution this season.

Share All sharing options for: Revolution Previews 2013: A Look At Jay Heaps' Tactics

Deep into October, with playoff contention a distant memory, Jay Heaps trotted out some very young and experimental sides in the final matches of the year. These systems provide insight into Jay's thought process as he was beginning to look forward to the clean slate of 2013.

The most important match of this variety came against Chicago at Gillette Stadium in the second to last game of the season. With the Fire chasing the top slot in the Eastern Conference, Heaps went narrow, and a Fagundez blast put the Revolution ahead with what was the eventual winner in the 17th minute.

In this meaningless victory, Heaps shows that he isn't scared of playing without a single true wide midfielder on the pitch. And, with the increasing popularity of static central defensive midfielders in MLS and the growing reliance on attacking fullbacks to provide width, this is encouraging. Jay sees the league-wide tactical trends of MLS shifting and that deserves credit.

That being said, width still needs to come from somewhere and I'm not sure this system is sustainable for the Revs. The major problem is the lack of serviceable wing backs. Andrew Farrell has played outside, but isn't it obvious that the extent of his market cap doesn't exist in that role? I'll wager plenty that he will be playing at center back exclusively in 3 or 4 years. The Revs better not be trading up in the draft just to fill a gaping hole in their roster. There are more cost-efficient ways to do that. 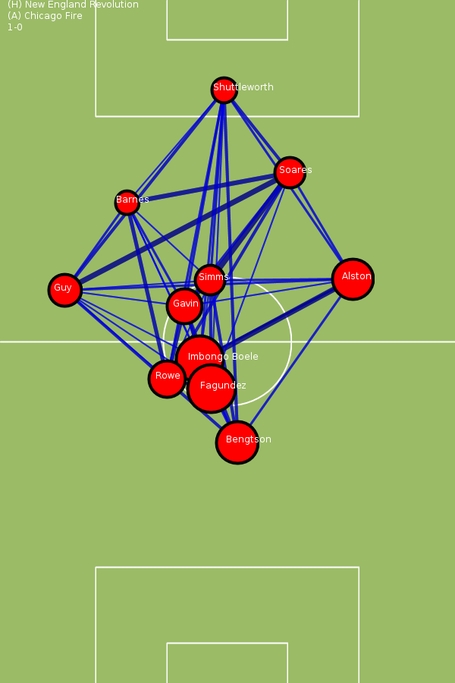 This network visualization is a representation of the New England tactical system for the Chicago match. Each player node is positioned roughly by their average position and the size of the circle is representative of how much they deviate from that location. For example, Clyde Simms's small circle is common for a defensive midfielder - most of his touches are concentrated in a small area. Kevin Alston, however, has a much larger circle. This is because fullbacks cover a lot more vertical space and Kevin's touches are a lot more spatially diffuse than Clyde's. The lines between each player are representative of the volume of passes that are successfully exchanged between them. A thick black line means that many passes were exchanged between the connected players. A thin blue line means that very few were exchanged.

My all-time favorite soccer quote is by Jonathan Wilson in a 2012 piece about Vasco de Gama. It goes, "Symmetry isn't essential in football, but balance is."

The Revolution had neither symmetry nor balance last season. This time around, New England must find some degree of balance if they want to make a playoff push. And, in my opinion, they must embrace tactical asymmetry.

As I alluded to in my first point, the Revs need to find serviceable width. While it seems that they can piece together a solution on the left side with an overlapping Tierney and Lee Nguyen carefully drifting in from the wing, there is no apparent solution to the right flank.

The solution? Not Kelyn Rowe.

Here is a frustrating example from this past season against Toronto. Rowe, playing inverted, has absolutely no support. If the Revs continue to isolate and disconnect Rowe from the rest of the system, he won't grow into the potential that he has. 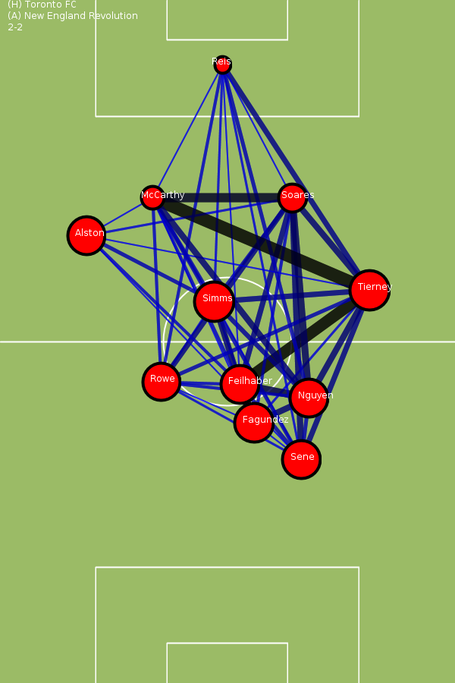 Rowe would benefit in a similar fashion to Lee Nguyen if the Revs had proper support on the right. However, this mechanism is completely missing. Without a fullback providing width on the right side of the field, the Revs need to find a proper right winger to fill this responsibility. The Revs tried a few players in that role this season which included some promising performances from Diego Fagundez. It's time for Heaps to take the training wheels off the 18 year old. It seems only natural for the undersized attacker to be utilized on wing anyway.

There was a sense of optimism in both the supporters groups and the media walking into 2012. While that glowing support may be a bit more muffled than last year, the glaring potential remains. The Revs have the pieces on the board to construct what could genuinely be one of the most exciting attacking squads in Major League Soccer. By finding a definitive answer to the question, "What is Revolution soccer?" and committing to lineups that proactively push that ideal, fortunes could quickly change down on the turf of Gillette.

The delicate balance between veteran leadership and exciting young talent has been struck this offseason and it's time for them to deliver.