Our resident referee has a serious ref-crush on Mark Geiger, but it's easy to understand why. Just look at his resume: FIFA Club World Cup, CONCACAF qualifiers, FIFA World Cup shortlist. So, why isn't Geiger refereeing the MLS Cup Final?

Before I get too far into this, I want to make one thing very clear. This is not an article meant to disrespect the officiating crew that was selected for Sporting Kansas City-Real Salt Lake in the 2013 MLS Cup Final this Saturday from Sporting Park.

Hilario Grajeda is also a solid referee, was in the center for the MLS All Star game vs. Roma, and was recently named the MLS Official of the Year, something that he deserved throughout the 2013 MLS season. Ismail Elfath was the runner up for that award (Baldomero Toledo was third), and I like Elfath as well, despite my opinion of his performance in the second leg of the Revs playoff series vs. SKC. Elfath is 31 years old, and has a pretty impressive resume for a referee who made his pro debut in 2009 in the NASL.

I backed Grajeda and his 4th official, Chris Penso, when they added 8 minutes of stoppage time in the second half of the New England Revolution's final home game against the Columbus Crew. And I think that Grajeda and his crew will do just fine on Saturday and will go so far as to say that I don't think I'll have an MLS Cup Final edition of the 3rd Yellow for next week.

Will Referee at 2013 Club World Cup

Jair Marrufo is also on that World Cup shortlist and did three qualifiers as well, but of the 4 available games USSF referees could have officiated at Azteca (obviously not counting the Mexico-United States game), Geiger refereed half of them, and without incident I might add, or at least according to a few of my El Tri rooting friends. So how does one of the best referees in CONCACAF, let alone the USSF, not make the shortlist for MLS Referee of the Year? I don't know, but I know why Geiger's not refereeing in MLS Cup this weekend.

Because here's the problem with that Club World Cup gig: Geiger and his crew will be reporting midweek to Morocco for the December 11 tournament start, essentially ruling them out from officiating the MLS Cup Final.

League, NBCSN, ESPN All Failing To Capitalize on MLS Playoffs 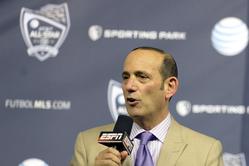 The 2013 MLS Playoffs might be going well on the field, but off the field, is another story. From poorly promoting games to not even televising them at all, MLS, ESPN and NBCSN have missed out on a great opportunity to expand the league's national image.

I have a huge problem with that. This is one of the best refereeing crews in CONCACAF, let alone MLS, and they can't even referee their own domestic final? Yes, Geiger and his crew have been very active during the 2013 MLS Playoffs, refereeing the first round match between Houston Dynamo-Montreal Impact, the second leg Eastern Conference Semi between SKC and New England and the second leg of the West Conf. Final between Portland Timbers and Real Salt Lake. But how does a scheduling quirk disqualify one of your best referees from refereeing the final?

Again, I'm sure on a personal or career level, it's much better for Geiger and his crew to be at the Club World Cup, because it gives them a leg up on the goal line technology that is going to be implemented in major tournaments, especially since next year is a World Cup year. But as far as I'm concerned, the MLS Cup Final is the most important game of the season, and it should be officiated by the best referee you have, not the referee who had the best season in MLS.

Mark Geiger is the best referee MLS, the USSF and arguably CONCACAF has right now and he should be refereeing the 2013 MLS Cup Final. MLS Referee of the Year shortlists mean nothing to me, although that appears to be what the league and PRO have decided to use when determining the assignments for this game. And I'm not a fan of that. Your best referee should be refereeing the final, regardless of 2013 standing or assessment ratings. Maybe Geiger spent to many games away from MLS working CONCACAF games, which shouldn't penalize him, it should help him.

Grajeda is good, and I expect no problems with him in the center this weekend. Elfath had a good season and has a very bright future, but showed his youth and inexperience in the playoffs during Revs-SKC and Toledo, despite his reputation, is a pretty solid referee. But right now, none of them can touch the year that Mark Geiger is having. And on that alone, Mark Geiger and his crew should be on the field for this weekend's MLS Cup Final. And much to my dismay and probably no one else's, that won't be the case.

Scheduling quirk aside, I'm completely stoked to see Geiger in the Club World Cup later this month and most likely, next summer in the World Cup. I'm hopeful that Geiger's performance later this month in the Club World Cup can propel him to a deep run in the World Cup next summer, which would be a great accomplishment for Geiger himself, but also MLS, PRO and the USSF. But can't hide my disappointment that he won't be in the center this weekend for the MLS Cup Final.

Or my gigantic Ref-crush on Mark Geiger. Because if I get to be even a quarter as good as a referee as Geiger is in the center, I will count that as a success. Since that's never going to happen (I'm a crap center ref), I will just have to admire from afar.