With Matt Reis' retirement today, the New England Revolution were in the market for a goalkeeper. Only a few hours after saying goodbye to a familiar face, the Revs welcomed back former keeper Brad Knighton.

The Revs announced they have completed a trade with the Vancouver Whitecaps for a conditional draft pick in the 2015 MLS SuperDraft. Today (December 11) at 5PM was the deadline for teams to trade players who were eligible for the Re-Entry process. With Vancouver declining Knighton's option for 2014, that made him eligible for the process but Knighton opted out of the Re-Entry process to facilitate the trade back to New England.

"My family and I couldn't be more excited to be coming back to New England, where I began my career," Knighton said. "I had three incredible years here and I couldn't think of a better city, organization and team to return to. I can't be happier this worked out." 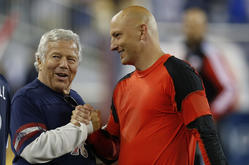 Matt Reis announced his retirement from professional soccer after a 16-year MLS career that included 11 seasons in New England.

Knighton, 28, re-joins the Revs after spending the last four seasons with Philadelphia, the Carolina Railhawks (NASL) and Vancouver. He began his MLS career in New England in 2007 after making the squad as an un-drafted free agent in training camp. Knighton spent most of the 2007 and 2008 seasons as the Revs third string keeper, including a loan spell with the then USL Portland Timbers in 2008, but was elevated to the backup role late in 2008 after an injury to Doug Warren and held that position through the 2009 season. He made his Revs debut against the New York Red Bulls on March 28 in a 1-1 draw and in six starts in 2009 Knighton posted a 1W-2L-3D record with a 2.33 goals against average.

Knighton spent his first three professional seasons with the Revolution before Philadelphia selected him in the 2009 Expansion Draft, ahead of its inaugural season. With the Union in 2010, Knighton made eight starts for the Union during their first season in MLS, going 3W-3L-1D in those matches, posting two shutouts and a 1.10 goals against average.

After a spell with his hometown Carolina Railhawks, in which he was named to the NASL Best XI team, the Hickory, N.C., native followed then Railhawks head coach Martin Renne to Vancouver where he played in 22 total games with 19 starts in two seasons. Knighton posted a a combined 1.11 goals against average and five shutouts, while going 9-6-5 in two seasons. In 2013, he went 6-3-2 with a 1.36 GAA in 11 starts.

"We're very pleased to be able to bring Brad back to the Revolution," New England general manager Michael Burns said. "We rate Brad highly and we did not expect him to be available to us tomorrow with the 12th pick of the Re-Entry Draft's first round. We're looking forward to him coming back to New England."

That statement from Burns is telling of the overall market for Knighton and the Revs need for another goalkeeper for 2014 and is a strong move for the Revs. Rather than hoping to get Knighton in the Re-Entry process, Burns and the front office/team went out and got their man at a fairly low cost. It would be expected that Knighton and Bobby Shuttleworth will have an open competition for the starting goalkeeping position during preseason training camp and likely into the 2014 season.