Ahead of Wednesday night's second-leg encounter with SKC, we caught up with Ben Gartland of The Daily Wiz again to update our discussion of the match. We also offer a few thoughts on possible lineup changes.

The New England Revolution may have a one-goal advantage over Sporting Kansas City going into Wednesday night's second leg of the Eastern Conference Semi-Finals, but advancing to the Conference Final is far from a foregone conclusion. New England hasn't won in Kansas City since April of 2008.

The injury report appears largely unchanged but for the worrying inclusion of Matt Reis as "questionable" with an ankle sprain. It seems unlikely that he'll miss the game, but with a quick turnaround and a long flight, anything can happen.

We caught up with Ben Gartland again to ask him a couple of additional questions ahead of the match. Don't forget to check out our original Q&A with him and the return feature on The Daily Wiz.

Rowe Rows the Revs to Victory 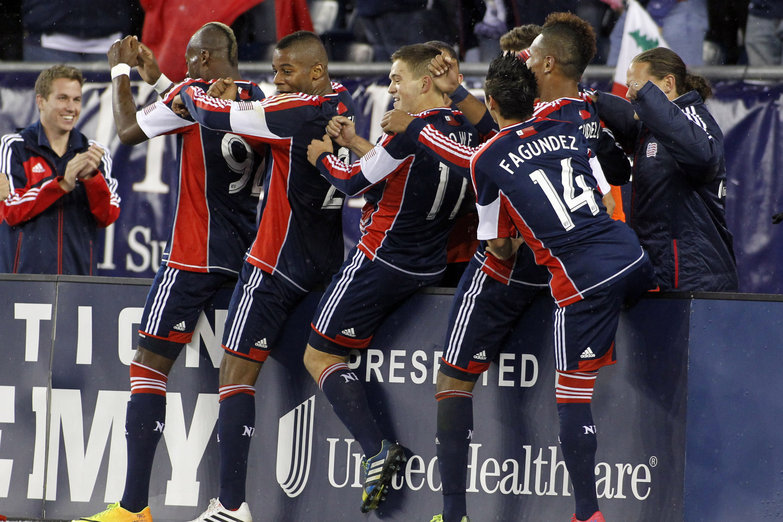 Kelyn Rowe is capping off a breakout season with excellent playoff performances.

TBM: I saw a lot of lamentation in regards to the lineup on Saturday from The Daily Wiz community. Do you see Vermes changing things up at home to something a little more to your liking?

BG: I believe so since there is a need for more of an attacking presence. As soon as Sporting went down two goals in the second half of the first leg, Soony Saad and Dom Dwyer came on since they've been the better forwards at creating and capitalizing on scoring opportunities as of late. I honestly believe Vermes was going for a draw in the first leg so that we could win in the second leg and now it's a necessity for attacking forwards.

TBM: You guys have Sinovic, Bunbury, and Collin on yellow card notice. Sure, losing Bunbury for a match probably wouldn't kill you, but Sinovic and Collin? Especially in Collin's case, do you see any gameplan or style adjustments to account for this danger on Wednesday night?

BG: I wouldn’t be surprised to see Ike Opara start over Collin and then Collin comes in as a sub later in the match. Opara is a pretty good defender and can stand his own against many different attacks. He’d be good for about the first 70 minutes or so and then I’d bring Collin on if Sporting had a lead they need to protect. I don’t see a game plan difference since attempting to corral Collin and have him stay back just leads to a complete 180 in Collin’s style. it’s either Opara gets the start or we pray that Collin doesn’t get another card.

TBM: Do we see Feilhaber on Wednesday?

BG: I hope so but I don't see it happening. My lineup has Zusi back on the wing and Feilhaber leading the midfield but I don't think Vermes goes for it.

In terms of differences between Saturday night and Wednesday night, there's really only one change I'd like to see made (not counting a Tierney start, if he's healthy, which I'm sure we all want to see). Dimitry Imbongo does not belong on the wing, and it's been painfully evident every time Heaps has put him there.

At this point, if moving Juan Agudelo away from the striker spot is not an option, Imbongo should be a bench player. Honestly, I'd rather start Ryan Guy on the right wing than Imbongo. Ideally, a front three of Agudelo-Imbongo-Fagundez would work with Dimitry as the target forward and the other two running off of him and scoring goals, but that would require sending Agudelo wide, which Heaps lately has been unwilling to do from the opening whistle.