For the first 45 minutes, referee Ismail Elfath kept the cards in his pocket. And while it wasn't a bad idea at the time, it forced him to pull out unnecessary cards later in the game and put several Revs players on yellows and one game away from suspension in the MLS Playoffs.

Going into the New England Revolution's first playoff game since 2009, there was some talk on Ismail Elfath refereeing the game. Most of it was positive, even with Revs fans remembering Elfath's assistant referees botching two offside calls in Chicago that both went against the Revs.

The general consensus was Elfath was a solid referee, and no one blamed him for the Chicago game specifically. But after last Saturday's performance, his stock took a bit of a hit.

And I'm not going to break down any of the goals, and the non-controversy of the Dorman goal should have been put to bed by now. I don't see any evidence that Andy Dorman's or Sporting Kansas City's Aurelien Collin's goals should have been disallowed nor do I think the far side AR should get any credit for making a potentially good call while out of position.

No Controversy on Dorman's Goal 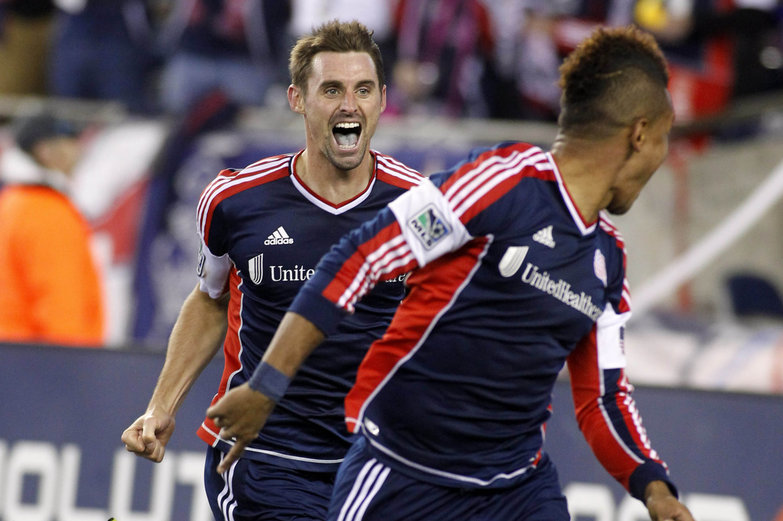 Andy Dorman's opening goal engendered controversy, but the AR got it right.

This is just about the final 20 or so minutes of the game that saw six yellow cards, cards that had been building up and, with better game management from Elfath, could have been avoided.

Now, I will start by saying that I wasn't against Elfath not showing any cards in the first half despite several opportunities to do so. Andy Dorman just 15 minutes in brought down Graham Zusi but Elfath elected only to talk to Dorman about the play rather than issue a card for a tactical foul. Collin went through the back of Juan Agudelo in the 30th minute and Dimitry Imbongo caught an SKC forward Jacob Peterson in stoppage time with an inadvertent elbow, but both of those players led their respective teams in cards in 2013.

But Elfath tried to be patient and for almost 70 minutes his plan seemed to be working. The first card of the match was a blatant off-the-ball obstruction by SKC's Seth Sinovic in the 53rd minute and after that that I was just waiting for the lid to explode on the boiling pot Elfath had been trying to sit on all game. Because in a game this physical I could sense where the ending of the game was going.

And in the 69th minute, Dimitry Imbongo obliged with a two-handed shove and the proverbial lid was off. What followed was a flurry of cards that failed to reign in control of a game that quite frankly wasn't really out of control. Yes, there was a lot of blatant pushing in the back by Imbongo, Collin and Teal Bunbury, but all of those plays were rightly cautioned. What followed afterwards, in my opinion, was Elfath trying to regain control of game and all he did was make it worse.

Part of the issue is that Elfath and his crew started calling the game tight, this was change from the first half in which physical challenges often went unpunished. By changing refereeing styles midway through the second half, it actually causes more problems for Elfath, particularly from the Revolution standpoint.

I'm not going to say that all of the following plays are undeserving of the cautions that they each of the Revs players received, but they are a result of the game going on around them and not the individual actions or fouls that occured.

And I can prove it. First up, we have Lee Nguyen's sliding effort at midfield. Now, this play happens about ten minutes after the two SKC cards on Collin and Bunbury and this is where I believe Elfath starts to try to reassert his authority on the game.

The challenge itself doesn't seem to be all that bad, as Nguyen does to ground well ahead of the play trying to block the ball from going up the line. Now, the challenge can be argued as either two-footed or studs up, and Lee's intent isn't really to get the ball, but to prevent it from going up the field, so I can understand why the card was issued. But in my opinion, there wasn't a need for the card, it was just Lee's second foul of the game, his first being a handball early in the second half. By issuing that card Elfath sets the wrong tone for the rest of the game and puts all the players on the field at risk to pick up a soft yellow card where two yellows in the MLS Playoffs means you sit (don't get me started on this either).

Either way, Lee's reaction the play is telling, because he's immediately upset at Myers, which suggests that the contact and follow through were perhaps embellished. I have yet to find a good reverse angle on this play, so I can't say for sure, but I have to respect Lee's reaction to the play. If he's upset at Myers on a questionable play, it counts for something in my book, even if the challenge is very unnecessary. But Nguyen's reaction to the play has nothing on the next Revolution player reaction after he was called for a foul.

Next, we have Chad Barrett's dissent in stoppage time. Now, this is the one card that I can say that isn't in dispute. Barrett is a veteran player and he should know how to keep his emotions in check. But the problem is, he's got a case here.

What you don't see in the highlight clip is that just a minute earlier Barrett was dispossessed at midfield in a similar manner, and I don't see anything wrong with his challenge here. He uses his body and wins the ball fairly cleanly for the physical match that had been going on for 90 minutes. But this is where going tight late in games comes back to bite you, and Elfath has no choice but to book Barrett.

Now the foul itself isn't noteworthy, but again, this is what happens when you start calling a game tight because you think it's getting away from you as a referee. There were only 25 fouls in this game, yet 7 yellow cards. That's a ratio of one card for every 3.5 fouls give or take. For a game that was allowed to be physical in the first half, when only 9 fouls (including 2 hand balls) were called on both teams to zero cards, to suddenly escalate to 16 fouls (1 handball) and 7 cards is a ridiculous ratio in my opinion. We'll revisit this towards the end I promise.

The lack of consistency not only during the game but between individual plays of the same type in this game was staggering, but Barrett's two plays were not the worst of the day.

That honor goes to A.J. Soares, who was booked for a challenge while going up against an offside player in the 90th minute. Now, I won't say for certain that Soares doesn't catch Dom Dwyer with a elbow on the play, but again, Elfath let's the actions of the entire game effect his decision making and he books Soares. Not the end of the world, but he makes a grievous error here.

HUGE DISCLAIMER: The following paragraphs might not conform to FIFA or the USSF's Laws of the Game, and is based on my personal interpretation of the laws.

It's not that he signals a free kick to SKC, it's that he instead goes with the original call of offside against Dwyer. He was absolutely correct to signal the free kick because the booking to Soares in theory would overrule the offside. Not because it happened after, but because any booking that takes place should in fact give possession to the other team.

Law 12 states an indirect free kick will be awarded a player "commits any other offense, not previously mentioned in Law 12, for which play is stopped to caution or send of a player."

So Elfath initially signalling a free kick to SKC is correct, but somehow he is either talked out of the play or decides against it. This means only one thing, a lack of conviction in his original call and the number one pet peeve of mine for officials. If you make a call, even (and especially) if it's questionable, you have to own that call. The fact that Elfath doesn't own the call after he makes it only confirms in my eyes that he lost the plot on this game.

UPDATE (9:45 PM, Nov. 4, 2013) - After some follow-up research, I've come to perhaps a more concrete conclusion regarding a "dead-ball" infraction. The offside takes precedence, but Soares' actions can still be ruled as misconduct and subject to a caution/ejection based on the play, just as any infraction that happens during a dead ball situation like encroachment on a free kick. The offside is still awarded because it happened first, and this is the best example I could find on AskASoccerReferee.com regarding a "foul" following offside. So while Elfath and his crew did award the offside properly in the end, it still doesn't excuse the discrepancy in discipline between the two examples in the first leg of New England-Sporting KC.

But it gets worse. You see, in the 60th minute, Chance Myers absolutely obliterates Kelyn Rowe going up for a header despite Juan Agudelo being judged offside on the previous header. It's blatant two handed push from Myers who's not even going for the ball. If Elfath had called these two plays consistently, Soares shouldn't have been carded.

However, since Soares was carded, let's go back and say that perhaps Myers was whistled for the infraction and properly booked. I believe the result of the play would have been the rare, indirect free kick inside the penalty area. I don't think a penalty can be called in that situation because the ball is technically not in play, having been blown dead for offside. But again, this is my interpretation of the rules, and perhaps what actually would happen on the field. (UPDATE: Yeah, just ignore that too. It'd be a yellow for Myers, IFK for Sporting on the offside.)

And I'm not finished with Mr. Elfath just yet. You see, there was another playoff game Saturday night in MLS at Century Link Field between the Seattle Sounders and Portland Timbers. That game featured a combined 38 fouls, 21 by Portland alone, yet featured only 3 yellow cards.

The man in the middle: Baldomero Toledo. That's right, the man known for perhaps being the most card happy of center referees was in top form, managing the game well but without stamping his authority on the game. The only card given out late in the game despite the flurry of whistles was to Timbers substitute Ben Zemanski, despite almost 10 fouls, mostly by Portland, in the closing 20 minutes of the game.

Yes, that's right, Baldomero Toledo, crafty veteran center referee that he is, out managing his counterpart Ismail Elfath by a mile on Saturday night. And again, it's not to say that Elfath wasn't incorrect in doling out all those cards, but his inconsistency between halves especially put him in a spot where he had to keep doling out cautions.

And now, 7 players between the Revs and SKC are one card away from sitting out a crucial playoff game and that absurdity is not Elfath's fault.

But that's for another day.