The Revolution and Sporting KC haven't played each other since August 10th, a 3-0 loss at Sporting Park for New England. But can the Revs take anything from their first two meetings against SKC? The simple answer, not really. But neither can Sporting KC.

When the New England Revolution clinched the third seed of the Eastern Conference and were matched up with Sporting Kansas City in the MLS Playoffs, I was excited. I was so excited I was going to go back and watch the two regular season games between the two teams; do some advance scouting, as it were.

Then I remembered something very important: those two regular season games, for a variety of reasons, can't be applied to this postseason series.

No, seriously, I can't think of anything positive, from a Revs standpoint in particular, to take away from the first two games. They were a mess.

Why? Well, the first game, a 0-0 draw in gusty Gillette back in March which was the third game of the season, and the second game in August, a 3-0 SKC win, both came under circumstances that can't really help either team in today's game. 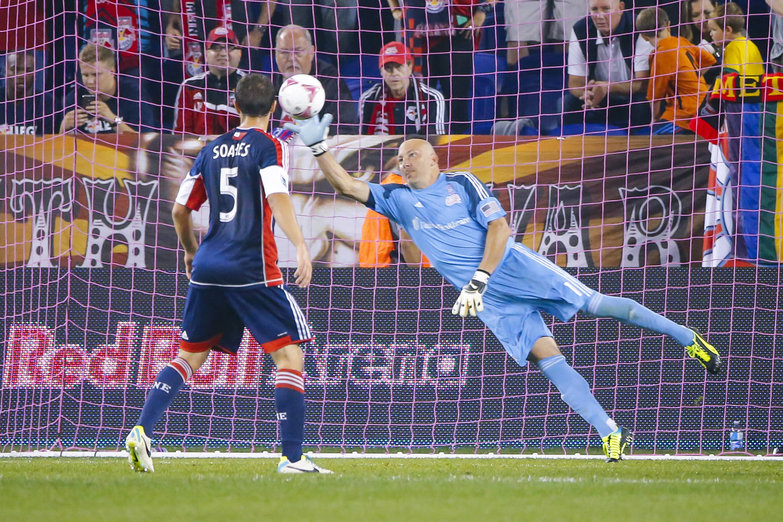 Despite the focus on the Revs' young guns in the attack, it's the defense that got them to the playoffs.

For starters, I think we can all forget about the first game all those months ago in New England. Not just because the game was awful and played in ridiculously windy conditions for a soccer game (neither side completed 60% of their passes) but because that game was so long ago that the Revs were still tinkering from with their players and formation.

I'm not kidding, this was the New England midfield for the game from left to right, Lee Nguyen, Scott Caldwell, Juan Toja (CAM), Clyde Simms, Kelyn Rowe. Chad Barrett was the lone striker (fine with that) and Kevin Alston was still in the starting lineup at left back before his leukemia diagnosis, with the regular defense the Revs have now (JoGo, AJ, Farrell), and Matt Reis in goal.

Yes, Rowe and Nguyen were still being used as wide players, which seems like such a terrible idea now (and possibly at the time, it's tough to remember) that they've been central midfield partners for several months.

Forget the fact that neither team could complete a pass or that SKC did manage five shots on target, including one in the first half that Simms had to clear off the line. This game was unwatchable from the start and had zero redeeming qualities in it.

The second game, perhaps, has some things to take away from it. The first is that Alston will not have to worry about marking Kei Kamara in the box since one will be presumably be on the New England bench (Chris Tierney is still battling an injury) and the other now plays for Middlesbrough in England's second division Championship after being sold in the summer. Kamara beat Alston twice in the box to put two headers past Bobby Shuttleworth.

For the second straight game, the Revs played against SKC without the services of Diego Fagundez in the starting lineup. While Diego did replace Alston in the match in the 57th minute, it was already 2-0 at that point and the Revs would be down to 10-men in the 65th after Dimitry Imbongo would be dismissed for his second bookable offense. Add on Andy Dorman's red for a high challenge on Kamara and Benny Feilhaber's free kick in stoppage time and that about wraps up the positives for the Revs from these two regular season games. If we can call any of that positive.

Well, there are some positives to take away from these games. The first being that SKC hasn't seen Juan Agudelo in a Revs jersey yet and they've never seen Diego in the starting lineup. That could be a bit of a culture shock for the vaunted SKC defense to see the two young speedsters on the outside today. It's also a completely different and more confident Revs team that in the first two meetings, where the Revs were still experiencing some growing pains.

Also, I think the Revs have seen the best of the SKC attack from that game back in August. It's been slightly downhill for Sporting KC since Kamara left, but that doesn't mean that SKC isn't scoring or getting results, they're just doing it differently now. While the Revs will still have to contend with services into the box, I think SKC has been more successful on a more direct attacking style with balls on the ground or out wide trying to stretch the defense rather than just repeatedly crossing the ball in. While in theory that should favor the Revs, especially with A.J. Soares winning tons of headers, it doesn't make the SKC attack any less dangerous.

And while the loss of Kamara was very important to SKC, but it's given other players like Soony Saad, Dom Dwyer and C.J. Sapong a chance to step up and get playing time at the top of SKC's 4-3-3 formation. And just because SKC's trio of strikers hasn't been finding the scoresheet doesn't mean they're not contributing. SKC's recent games might not have been easy on the eyes for soccer fans, but their defensive-minded approach and grind-it-out style of late is exactly the type of style that New England seems to have trouble against. Or, the Revs just look bad trying to defend a 1-0 lead late in a game. It's hard say.

So what's the outlook for this two-game home-and-home series? I'd break it down like this: if it's a high scoring affair, I'd think that would favor the Revolution. Forcing SKC to chase the game and perhaps change their formation or playing style could be very advantageous late in the match if the Revs can generate some possession or work a counter attack. If it's a low scoring game, that should favor SKC, who are much better suited and capable of sitting back and just playing out the remainder of the game.

Now, this playoff series should come down, not to the defenses, but to the two midfields. Agudelo and Fagundez are going to be tasked with not only getting forward, but assisting on shutting down the flanks. Revs head coach Jay Heaps has a decision to make with his defensive midfield spot between the possession/passing-oriented Scott Caldwell or the more physical, all-around Andy Dorman. I think the fear of Dimitry Imbongo getting himself in red card trouble has subsided in the last few months, but against SKC's defense he'll still need to keep his emotions in check to avoid serious incidents. When (not if) Imbongo does draw fouls, the Revs will absolutely need to capitalize on their free kick opportunities, something they've been lacking for most of the season.

Defensively, Jose Goncalves and Matt Reis will need to keep their guys organized. Reis has been very good at managing his area in recent games, coming out and claiming a lot of crosses very confidently, and I expect more of the same from SKC since Graham Zusi is pretty much one of the best at service into the box. And the defense will need to close down on their attackers, something they didn't do in the second match-up, which allowed Saad to find Kamara twice in the box.

Overall, I think this will be more of a low scoring series, but that doesn't mean the Revs can't win it. It just means that these are the two of the top defenses in not only the Eastern Conference but also in MLS. I don't think seeing a pair of 1-0 wins for each home team followed by extra time and possibly penalties in Sporting Park is out of the realm of possibility.

But regardless of the results, I expect at the very least for New England to compete in both games, something that - at least in August - was not the case. This will be a tremendous test for the young New England side, particularly its creative attacking players.

And while getting to the playoffs and finishing in third place is a tremendous accomplishment, I'm fairly certain the Revs don't want the season to end next Wednesday in Kansas City.

And neither do I.