The Missing Subplot: Benny Feilhaber vs. the Revs

There used to be this guy. He used to play for the New England Revolution. He was the one who was going to lead us back to glory. He used to be really hyped up. Now he's not even the most important ex-Rev in Kansas City.

Share All sharing options for: The Missing Subplot: Benny Feilhaber vs. the Revs

Since getting thrown aside by the New England Revolution in the offseason for a bucket of change, Benny Feilhaber has done exactly what he did in New England: not lived up to expectations.

There are very few ex-Revolution players as divisive as good old Benny Flowers. The controversy over him even existed during his short, but memorable for its unmemorableness, tenure in New England. He arrived in Foxboro with a bit of hype behind him. He was, after all, a World Cup veteran, and a man who scored one of the most memorable goals in USMNT history. He was a class player, and he was going to thrive in MLS. With New England, he did not.

After an overrated and abbreviated 2011 with the Revs, he had a much worse second year. I can't speak for every supporter, but when I saw him play he had an air of arrogance and indifference around him. When Jay Heaps took over, I thought he'd succeed in leading the attack. Yet, by the end of his second season, he was barely getting on the pitch. The team seemed to look better when he wasn't playing. In fact, it became apparent at some point that Kelyn Rowe might just turn into the player we'd previously thought Benny would be for the team.

It seems more like Benny is a luxury item on his new team.

As we know, he ended up going to Kansas City, because New England was going to be awful. No need to have him rot in rotten Rotter-town, right? He'll spark the Kansas City attack and bring free flowing total football to Kansas City, right? Wrong.

While Kansas City did have a better season and came within a breath of winning the Supporters Shield, it has not become Benny and Sporting Kansas City. It seems more like Benny is a luxury item on his new team. He, once again, has had an average season.

Don't mistake me, he hasn't exactly been a disaster in Kansas. He's played less games, had a lot less minutes, and gotten less starts. Still his goals and assist totals are up. The overriding thought, however, was that he was going to become a superstar at Sporting Park. Instead, it's been more of the same. Popping up once in awhile in the right spot, but then disappearing in a pressure moment. 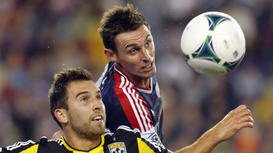 Veteran Andy Dorman is making his case to keep starting.

It seems like ages ago that he played in New England, but it was only a season ago. The Revolution trading him was met with a little skepticism at first, but now it's almost entirely forgotten. Unless New England is playing Kansas City, we don't even really think of him because he has not been "lights out" for them. Ironically, in the Revs' first playoff berth since 2009 - a playoff berth so previously inconceivable that it probably helped make Benny want to leave - they are facing Benny. He is not the player we'd hope he would be. He is not the player Sporting hoped he wouldbe. He is probably not even the player he hoped he'd be.

He is a good role player on a good team. He is not Landon Donovan. He is a decent passer. He is not the number ten that Jurgen Klinsmann, Bob Bradley, me, and probably Benny himself (look at the number he chose at SKC), thought he was. He is not even the most important ex-Revolution player in Kansas City - that'd be Seth Sinovic (don't get me started on that one).

Benny is not a demon that needs to be exorcized, he is simply a reminder of the ending of the Steve Nicol Era. All that said, if the team that he was seemingly desperate to leave ended up being the team that eliminated him from the playoffs, it would be a nice and darkly comical closing on a disappointing story.