Sticking With Dorman: A Recipe For Success This Post-Season

Scott Caldwell may have won the battle for his spot in the starting XI all season long, but now it is the veteran Andy Dorman who is making his case to stay in the lineup as the Revs look to their first playoff opponent, Sporting Kansas City.

Share All sharing options for: Sticking With Dorman: A Recipe For Success This Post-Season

The Revolution are officially in the playoffs. Yes, that's still fun to say (and type). And it's in many ways due to the inspired play by veteran goalkeeper Matt Reis and the soon-to-be departing striker Juan Agudelo. Those are two obvious choices to point to when you consider New England's success in the past month or so which culminated with a six-game unbeaten stretch. But in arguably the Revs' two most crucial matches, their home-and-home series against the Columbus Crew, it was the emergence of Andy Dorman as a fill-in defensive midfielder that also played a big part in those pivotal wins and the ensuing playoff berth.

Dorman-who was relegated to a bit-part role on this year's Revolution squad after Scott Caldwell locked-down the spot in front of the back-line-showed well in U.S. Open Cup play, but in league play he was unpredictable and at times a liability. In his few appearances (totaling 400 minutes), Dorman received two straight red cards, one of which coming against Sporting Kansas City.

it was the emergence of Andy Dorman as a fill-in defensive midfielder that also played a big part in those pivotal wins and the ensuing playoff berth.

Despite his questionable and enigmatic form leading up to October, it was his two starts against Columbus that may have just guaranteed him a spot on Jay Heaps' roster in 2014. But more than that, I believe that he's done enough in those two games alone to hold onto his spot as the Revs push forth into their post-season run.

This opinion comes from a number of angles. The first is that Scott Caldwell, for as great as he played all year, seemed to hit his rookie wall towards the end of the season. Perhaps it was his own-goal against D.C. United that started it, who can really say? The thing about Caldwell is that I think he became rather easy to figure out. He rarely challenges for the first ball, but always tries to win the second ball in the midfield. He does so, however, without a physicality to it (knowing full-well that it is not his strong-suit). This is, unfortunately, his downfall. The play-maker can pick out a quality pass with possession and a few moments to look up, but keeping the ball away from him was easy if you simply out-muscled his 5-foot-8, 150-pound frame on the first ball or just simply lobbed the ball over him all together. This is how teams began to exploit the Revolution midfield.

So, yeah, maybe it was a rookie wall that he hit, or maybe it was teams figuring out how to keep the ball away from him or perhaps even a combo of the two. But Andy Dorman, on the other hand, has the physical presence and the guttural willingness to challenge for the first ball, making him a more effective option against teams that play rough. His passing may not be as potent as Caldwell's, but it may just be good enough to keep the wheels turning on a Revolution attack.

Caldwell's short-comings force his fellow midfielders, Kelyn Rowe and Lee Nguyen (particularly Nguyen), to sit a bit further back than would be ideal so as to not leave Caldwell on an island. With a more forceful presence in that spot, such as Dorman, there is less defensive responsibility for Rowe and Nguyen, allowing them more freedom to facilitate an attack.

Take a look at the Lee Nguyen heat maps below. The first is from the Revs' game against the Montreal Impact on October 12th. The second is from last week's win at Crew Stadium: 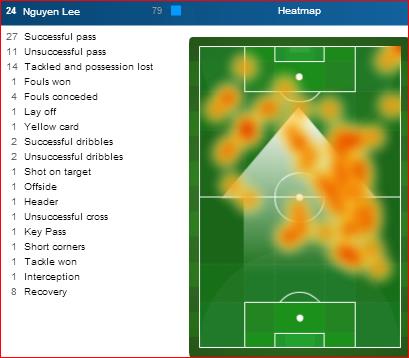 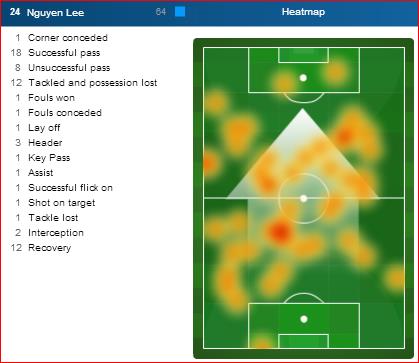 The first heat map illustrates Nguyen's defensive responsibilities in the middle of the pitch. This point also contributes to the notion that Nguyen's suspension due to yellow card accumulation was precisely because his role forced him to help make up for the lack of physicality in the midfield with Caldwell playing. In the second map, you can see that Nguyen has more freedom to roam around the pitch, which is of course advantageous for a player of his skill set.

Their stats tell a somewhat different story though. Against Montreal, Caldwell racked up an impressive 91% passing percentage. Last week against the Crew, Dorman only managed 60%. Both had four clearances and won the same amount of tackles as they lost (2 for Andy, 3 for Scotty). The two also had modest stats when it came to recoveries (Dorman 3, Caldwell 2) and clearances (4 for each). In essence, the main difference between the two is that Dorman is nowhere near as efficient of a passer as Caldwell is. Then again, we have a very small sample size to work with for Dorman this season. So, perhaps the points that I'm trying to make by pointing to these stats are moot.

Is Dorman a better defensive midfielder than Caldwell? I cannot say, nor am I trying to. Truth be told, I don't think either of them are perfect at the part. But Dorman adds that extra element that may just prove to be crucial against a physical team like Sporting Kansas City. Dorman is also an MLS veteran who knows full well what he's up against and what to expect in the MLS post-season. In my opinion, if Jay Heaps chooses to stick with Dorman, he will see his selection continue to pay off in New England's favor.