The Revolution may have taken the three seed, but they have a hard road ahead of them if they hope to make the MLS Cup Final. Still, when you think about it, don't you start to feel like maybe - just maybe - this is a team of destiny?

Share All sharing options for: MLS Playoffs 2013: Revolution the Team of Destiny?

The New England Revolution are in the playoffs. Take a minute, let it sink in. Enjoy it. Say it a few times, let it roll off of your tongue, let it sing in your ears. Wipe that tear from your eye. Just live in the moment.

Now snap back to reality. This was the big goal, and it's awesome, but now that we're here, it's time to work. There was never going to be an easy match-up for the Revs in this postseason, but drawing Sporting KC for the two-leg semi-final round was definitely not what the doctor ordered. New England faced SKC twice in the regular season, going 0-1-1 with an ugly 0-0 draw and an even uglier 0-3 loss. KC beats you up and hits you with big, fast, potent forwards; the Revs struggle with these qualities in an opponent.

That said, I have a growing sensation that something else is going on here. Sort of a feeling that the Revs might just be a team of destiny this year, like the Sox in '04, or the Saints in '09-'10. It's an almost superstitious belief that usually leaves me skeptical, but hear me out on this.

The Revs Make the Playoffs 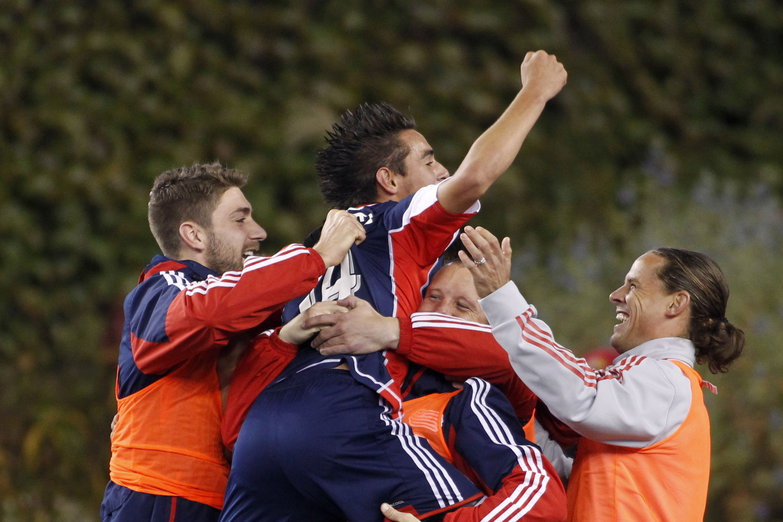 The Story Stream following the pre-match, in-match, and post-match coverage of Sunday's victory.

First of all, there's the obvious. The Marathon bombings this Spring affected everyone in the New England area in one way or another, but the Revolution were the local team that got hit the hardest. Matt Reis was right there. His father-in-law almost perished in the attack, and only Reis' quick thinking and calm under pressure saved John Odom's life and leg.

Boston Strong is a sentiment that runs deep through the veins of every player in this squad, all the coaches and staff, and the fans. Sure, the Revs don't have a massive footprint in the local sports scene, but that makes them no less affected or determined. Sports history is littered with clubs that have risen through adversity and tragedy to win championships. The Revs could be the next.

Also, there's a little stat that I read the other day that had escaped me previously: the Revs are 4-0-2 going into the playoffs. Remember when there were six games left, and we thought there was a good chance the Revs would lose a game in that stretch? They didn't. They didn't even go 3-0-3 like we (read: me) sort of expected. They went unbeaten and won four games. Statistically, they're one of the hottest teams in MLS as the playoffs begin.

No one wants to play the team on the hot streak in the playoffs. RSL rode a surge of great form all the way to an MLS Cup title in 2009. And who can forget the 2002 Revolution, who had to go on a historic streak to end the season just to make the playoffs, before bulling their way all the way to a home-field MLS Cup Final appearance.

On the subject of that 2002 team, let's remember that Adin Brown was an absolute colossus throughout that run. You know who else has been immense in goal? Matt Reis. He's 7-0-4 on the season (not counting the red card game against Montreal), the first goalkeeper in MLS history to go unbeaten in a season where he played at least ten games. Yeah, he's conceded goals, but look no further than Sunday's performance against Columbus to see how important he's been in keeping this squad in games.

It all adds up pretty convincingly. I don't want to be that guy who talks about fate or trusts to superstition, and I would never venture that the Revs have the strongest roster in the playoffs this season, but it's compelling. And it feels good to believe.