New England vaulted back into the playoff race with a win over D.C. and some help from their rivals, but a loss to Houston has them on the outside looking in with perhaps too much adversity to handle coming down the pike. Here's a look at the East race as it stands now.

Two weeks have passed since the last time we looked at the Eastern Conference playoff race and analyzed the New England Revolution's chances at making the postseason. In that intervening time, the Revs have managed a win and a draw, and the landscape has changed enough that it's difficult to be truly optimistic that New England will end its playoff drought in 2013.

Last time we did this, we agreed that the Revs needed to do their business at home in order to make the playoffs, at a minimum. Well, they haven't done that. A 2-1 win over D.C. United encouraged fans, but a 1-1 draw at home to Houston has dashed any chances of staying perfect in Foxboro. With trips to New York, Montreal, and Columbus coming up, the unfortunate truth is that points are not going to come easy. Given the Revs' road record, it looks more likely that they'll be out of the playoffs rather than in them.

Here are the standings as they look right now: 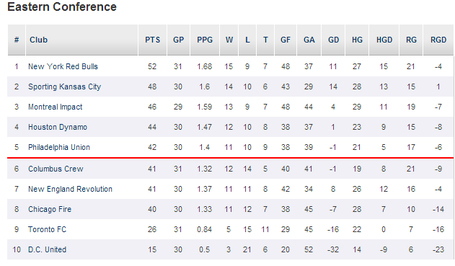 As you can see, four out of the five "fringe" playoff teams are on 30 games; only the Crew have played 31 which, while they are still mathematically in it, makes them a longer shot than their counterparts. New England sits in seventh with 41 points, level with Columbus, which is handy since the teams play each other twice in the final weeks. They are, however, still a point behind Philly and three behind Houston.

Here are the teams' closing schedules:

Houston looks like they're just about in at this point. Despite having to travel to Panama on a short week in the final round of the season, three of their remaining four league games are at home. Those opponents are Montreal, Kansas City, and New York, sure, but Houston is a good home team on a heck of a run right now. The CCL doesn't even appear to be slowing them down as some excellent depth has enabled them to keep fresh legs in league play despite short weeks. Two wins puts them at 50 points, and that should be more than enough for fifth place; in fact, it will probably land them fourth.

Columbus' schedule is somewhat middle of the road. They have two home games, but that includes a tough visit from Kansas City. For them, their part in the race will come down to how they handle the Revs, who are nearest to them in the hunt. Back-to-back matches against New England represents a golden opportunity with two "six-pointers" that could catapult the Crew into the playoffs and beat the Revs down as far as even eighth place. That said, none of these matches are easy, and with one fewer game to play than everyone else, Columbus will need a lot of help to get in.

Philadelphia has a very even remaining schedule. They have two each of home and away matches, and for each set, one match should be a relatively easy win, and one will be very difficult. If they can win home against Toronto and away to D.C., they'll be at 48 points already; one draw gets them to 49, the magic number discussed in the comments section of our last playoff article, and it's looking more and more as though that will actually be the number that gets a team into fifth. For Philly, that's certainly doable.

Chicago's recent results have really, really hurt them. They now have just one home match left out of four, and with their inconsistency, that sounds an awful lot like a death knell. That said, their home match is against Toronto, and away matches against D.C. and Dallas are more than winnable. The problem for Chicago is that they're last among these clubs; there's so much ground to make up, and they haven't shown the ability to get it done in crunch time.

Finally, New England. Three away matches, one home match, and upcoming road encounters with Montreal and New York thrown into the mix. This is a very, very tough road, and it was made all the tougher when the Revs failed to win against Houston on Saturday. At this point, New England absolutely has to get a point either in Canada or the Big Apple, and then probably has to win both matches against Columbus. That puts them at 48 points, which is still a point off from the number that seems to be the cutoff for this playoff race. With a little help, though, that could be enough.

As it stands right now, it seems like Houston and Philadelphia have the best chances of all to make the playoffs, and not just because they're already in fourth and fifth. Their schedules are more favorable than Columbus, Chicago, and New England. If the Revs had beaten Houston this past weekend, they'd be in fourth place, level on points with the Dynamo at 43 and ahead on goals scored. They failed to get it done, and now they are heavily reliant on the rest of the East to determine their future.

It's not a spot that favors the boys from Foxboro.