Revolution Pre-Season: Takeaways from 4-1 loss to the Vancouver Whitecaps

The Revolution closed their Casa Grande trip with another friendly match, this time against the Vancouver Whitecaps. After a strong defensive showing against Kansas City, it's the New England back-line that had a match to forget, letting up 4 goals. However, the Revolution attack is still yet to find that elusive goal from open-play.

Share All sharing options for: Revolution Pre-Season: Takeaways from 4-1 loss to the Vancouver Whitecaps

The Revolution wrapped up their stay in Casa Grande, AZ yesterday with a 4-1 loss to the Vancouver Whitecaps in a friendly scrimmage at Casa Grande Sports World.

It was the link-up play between speedsters Darren Mattocks, Paulo Jr., and rookie Kekutah Manneh that proved to be the most challenging for the Revs out of the gate as the three contributed to the Whitecaps' first two goals (both scored by Mattocks, who ended up with three on the day) within the first five minutes.

Although New England pulled one back in the 11th minute by way of a Chris Tierney penalty kick (awarded when new addition Matt Horth was tripped up in the box), Mattocks' third goal off a free kick was pretty much the nail in the coffin.

Jay Heaps' starting line-up featured the same back-line that started against Sporting Kansas City last week, with Kevin Alston on the left, trialist (and former Whitecap) Bilal Duckett on the right, and A.J. Soares and Jose Goncalves partnering in the middle. The full line-up probably looked like this: 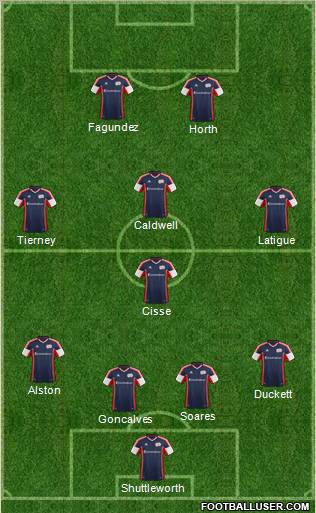 Kalifa Cisse once again manned the center of the midfield while Revolution veteran Chris Tierney occupied the left-wing. The case of Chris Tierney this pre-season is particularly interesting to me. Based off nothing more than relays of the match via twitter, Tierney seems to be playing in form so far this pre-season, and the fact that he took the penalty-kick yesterday could perhaps indicate that he is in for a bigger role in 2013--maybe even as team captain.

Could Lee Nguyen's spot on the left be in jeopardy? Or perhaps there is a case to move Nguyen centrally to give Tierney the left flank to himself to provide more wide service. And just where does Juan Toja fit into all of this? Furthermore, according to coach Jay Heaps post-game, SuperDraft selection Donnie Smith was also dangerous in the same left-midfield spot and "provided three or four scoring opportunities". The left-midfield spot, if you ask me, appears to be up for grabs.

The second half allowed both coaching staffs to field a new set of players. The Revs line-up was as follows: 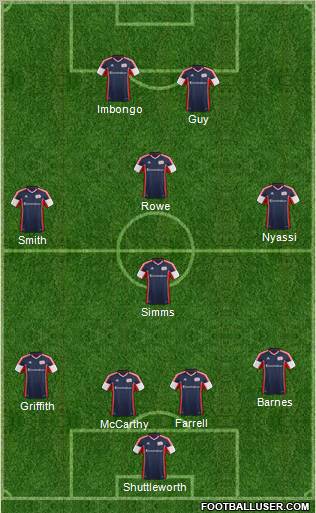 Again we see mystery man Sainey Nyassi in the line-up, this time in his more typical right-midfield spot rather than as a second striker. But more intriguing is the choice to pair Ryan Guy up top with Dimitry Imbongo. Guy, who saw a few games in this role (particularly the Revs' glorious 3-1 road win against the LA Galaxy last season), has yet to settle into a full-time position in Jay Heaps' squad. But perhaps that's exactly Jay Heaps' plan for 2013. Or maybe it's still very much up in the air.

Despite a highly disappointing first half, the @NERevsLive twitter feed offers glimpses into a much more dominant second half by the Revs. Nyassi and Smith sounded to be highly involved along with Guy and Kelyn Rowe, who seemed to have assumed free-kick duties, at least for the second half.

The Revolution's website did not have much for game highlights, but Vancouver's did. You can see some of the action in the video below:

As purely just an educated observer, things I like in this video are Bilal Duckett's defending (for the most part) and Kelyn Rowe's free-kick in the second half. Our back-line as a whole, however, still appears to have its work cut out for it. Goncalves seems to lose his man (Mattocks) on the first goal, while Soares and Bobby Shuttleworth collide on the Vancouver free-kick from what one might be able to assume is a lack of communication (?). And in the later parts of the video trialist Quinton Griffith (who played left-back, where he plays for the Antigua and Barbuda national team) seems to get out-paced by his man and beaten to goal, leading to some chaos in the box.

4-1 is a tough loss, but of course a learning experience as well. The Revs will now head back home to Foxborough for more training before their next trip to Tucson, AZ where they will compete in the Desert Diamond Cup.