With little to analyze other than what was provided by New England's @NERevsLive account on Twitter, we take what we can from today's pre-season friendly against Sporting Kansas City.

The New England Revolution participated in their first game of the pre-season in Arizona today, a friendly scrimmage against eastern conference rivals Sporting Kansas City. Although there were no goals and limited information available in terms of the actual play-by-play, there are still some talking points to take away.

In particular, Jay Heaps utilized 3 different player lineups (the match was divided into three 30-minute periods) mixing trialists and newcomers with the usual "first-teamers" (though nothing is certain, of course). It seems just about everybody who was healthy got some playing time today, some more than others.

The initial starting line-up was as follows: 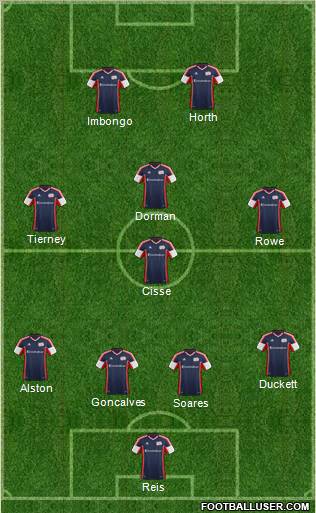 As Jeff Lemieux pointed out on twitter, Alston got the nod at left back, just where he left off at the end of 2012. Trialist Bilal Ducket was the starter at Alston's usual right back spot, which certainly is noteworthy. Duckett, who spent the last season with the Harrisburg City Islanders of the USL PRO league (and was on the squad that knocked the Revs out of the U.S. Open Cup last season), has previous experience in MLS with the Vancouver Whitecaps, though that didn't last all too long. He was training with the Revs at the tail end of last season as well, so this appears to be his second stint with the team.

Not much to note for the midfield other than the first Revolution game-time for off-season acquisition Kalifa Cisse (who was cautioned within 4 minutes for a tackle on Sporting's Oriol Rossel). Up top, however, Jay Heaps opted to start trialist Matt Horth alongside Dimitry Imbongo.

Horth is an interesting addition in that he currently plays for the Atlanta Silverbacks of the NASL. Wikipedia tells me that Horth, originally from Ohio, has scored 18 goals in 49 appearances for the Silverbacks and was also the first player to score a goal under the coaching of Eric Wynalda when he was their manager for that brief time last season. Based on the highlights I've seen (some of which are below), Horth seems to be a pretty well-rounded forward who could probably be best used by Jay Heaps as a target-man.

The second period saw a full turnover, allowing Heaps to get more players valuable minutes against the 2012 Eastern Conference champions. The lineup that took the field was:

MLS SuperDraft #1 overall pick Andrew Farrell made his Revolution pre-season debut at right back while 23rd overall pick Luke Spencer was paired up top with boy-wonder Digeo Fagundez. Local man Scott Caldwell got the nod in the midfield along with Supplemental Draft pick Gabe Latigue and Antigua & Barbuda international Quinton Griffith. Most intriguing here was the inclusion of Ryan Guy who seems to have been employed in the center of the midfield as opposed to on the right wing. Guy spent some time as a defensive midfielder in 2012 when Clyde Simms was out with an injury, but it is unclear if Guy occupied that same role today. If he was, then the lineup probably looked something like this: 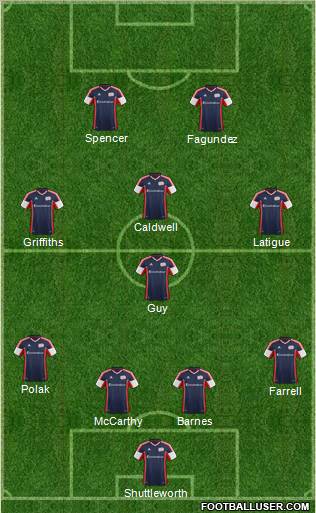 For the final period, Jay Heaps switched Griffith over to right-back, sliding Farrell into his more natural center back position alongside Supplemental Draft pick Alex DeJohn. Fagundez moved into the midfield and Sainey Nyassi and Chris Thomas took over as forwards.

Nyassi was rumored this time last year to be preferred as a forward option by Jay Heaps, but his injury throughout the 2012 season prevented that from ever coming into fruition outside of a couple reserve league games. It seems like that train is back on the tracks, which might explain why Nyassi has been kept around for so long despite falling out of relevancy for the Revs this past season. Just how it will pan out will be interesting.

21st overall SuperDraft pick Donnie Smith was slotted in at left-midfield after being pegged by pundits as a likely option at left back in the pro game. And Supplemental Draft pick Chris Thomas, who led the nation in goals scored in 2012, joined Nyassi up top. 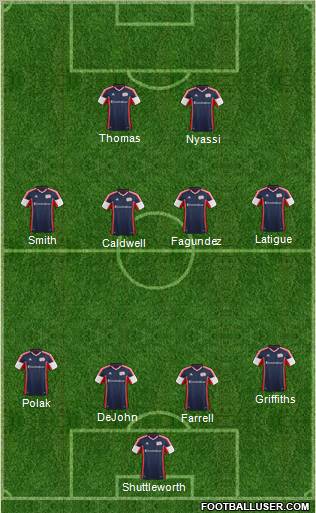 The Revolution defense denied Kansas City any goals, but so far the attack still seems to lack a difference-maker. That said, it is still very, very early-on in pre-season. Revs fans should feel optimistic with the shut-out and look forward to Heaps finding the right combination in the attack that will finally be able to break through. Of those on trial, it's difficult to guess who will make this season's 30-man roster with just one game, but there will be plenty more opportunities out west for impressions to be made.

New England's next pre-season match-up with come against the Vancouver Whitecaps on Tuesday at Grande Sports World in Casa Grande, AZ.