Supporters can agree that at times you are sometimes viewed by regular fans, security and the general public alike with suspicion. Well to further prove they're wrong to do so, here's another example of soccer supporters uniting for a good cause.

Supporters make American soccer different from other professional leagues. More than just fans, these organized groups typically occupy their own section within stadiums across Major League Soccer; standing, cheering for the full 90 minutes to support their club. Here, the New England Revolution are supported by the Rev Army, Midnight Riders and The Rebellion. Supporters can agree that at times you are sometimes viewed by regular fans, security and the general public alike with suspicion. It almost feels as if we are paying for the crimes of the English firms in the 1980s or merely being stereotyped by someone who has watched Green Street Hooligans too many times.

Supporters groups foster an environment of unity and family bringing people together under a common cause. In addition supporting their club and growing the game, numerous charity events take place throughout the year with supporter groups from all over the country. The latter I think is important to highlight. Supporters groups do a TON of charity work. It needs to talked about, to let the people who look down upon supporters and dismiss them simply as ruffians that these are well organized groups that exercise their ability to do good, often.

Recently, I stumbled across a group doing just that: Hooligans for Heroes. As a veteran of the Iraq War, my interest was instantly peaked and I sought out to find out more. I reached out to Gene Butcher, Michigan native, to ask him about Heroes for Hooligans. Check out the interview below to see how it all started what their mission is and how you can help! 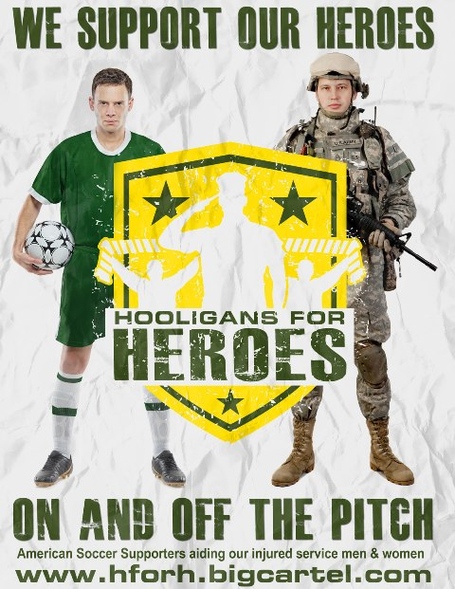 Where you from? What's your back story?

I'm Gene Butcher, 38, father of two and I am a professional Fire Fighter. I was born and raised in Pontiac, Michigan but I now live in Waterford Michigan. I started playing soccer on a church league when I was 7 and was instantly hooked on the game of soccer playing all through school and on various travel teams until the spring of my senior year I tore my ACL thereby ending all dreams of playing in college. I am the President of the Northern Guard Supporters in Detroit, Michigan.

What was the catalyst to start the organization?

In early June of 2012 when the Northern Guard SG were selling flags at matches for people to wave at DCFC matches we were contacted by a woman named Julie whose husband is currently deployed in Afghanistan in a Stryker Brigade. She asked if she could purchase one online so she could send it to her husband Chris because he had been following DCFC online. We sent her one and she in turn sent it to him in Afghanistan. About a month later he posted a picture on the Northern Guard Facebook wall of him holding the flag wearing full desert battle dress next to a machine gun. That picture traveled around the internet like crazy a ton of the DCFC supporters commented on the pic. I had been keeping track of his blog and one day he made a plea to his friends and family to help him raise money for the Wounded Warrior Project because two of his closest friends Sgt Jordan Sisco and Spc Jason Smith, had been critically injured in an IED explosion. My Brother Ken, our friend Drew Gentry and myself who run the Northern Guard Supporters had been looking for a charity we could support most of the season and could not find one that really fit. When we got the word about Chris's friends we knew this was something we had to help with. It took a few days to hammer out some of the details but Hooligans for Heroes was born pretty quick. My brother Ken and I grew up in with the absolute utmost respect for American Soldiers, Sailors, Marines and Airmen our dad was a Vietnam Veteran and had battled complications due to Agent Orange since he returned from Vietnam. Unfortunately, he passed away in October 2009 from health complications from Agent Orange exposure.

What's your long term vision and objective for HforH?

Long term we would like to see HforH chapters everywhere. We feel that by using local relationships like club front offices, local vendors, players, leagues and people we could raise an extraordinary amount of money for WWP. We have a lot of local resources here in South East Michigan however outside of that we don't have many. The Chapter system would be very advantageous because organizations would be more willing to work with people they already know. We have adopted a Constitution and Bylaws and specifically added a section on Chapters so all fo the chapters can be on the same page. We have had people from different states already asking for more information on starting a chapter.
The objective is simple; to raise as much money as we possibly can for the Wounded Warrior Project. That is and will remain our single minded focus for Hooligans for Heroes.

What club do you support?

Hooligans for Heroes was born out of the smoke , flares, drums and chanting of the Northern Guard Supporters who support the NPSL Detroit City Football Club in Detroit, Michigan.

What can fans and other supporters do to support HforH?

Buy a shirt, Buy a scarf, Donate, Start a Chapter! We have had a site up on the net for about a week now selling t-shirts, and hoodies and the response has been tremendous. We also have it setup on the site to make a donation if for some reason you don't want the shirt or hoodie. Surprisingly there have been a lot of people giving straight donations. We are also in the final stages of getting HforH scarves which we think will sell quite well. If you want to really get involved and help why not start a HforH Chapter in your area? We can help with a lot of the details of starting a chapter or holding a fundraiser.

How exactly does supporting HorH help our veterans?

The sole purpose of the HforH being in existence is to raise money for the Wounded Warrior Project. 100% of the money HforH raises goes to the WWP and that in turn helps our wounded Veterans.

Simple enough folks and it makes me proud to see soccer supporters doing their part to support America's wounded.

Support the cause and check out the linkage below!