Social Media Report: Who's the Most Followed Revs Player?

Share All sharing options for: Social Media Report: Who's the Most Followed Revs Player?

This summer I posted a story about the importance of Twitter in the modern sports arena and how soccer specifically was the impetus for me to join the social media revolution.

It begged the question...who is the "popular kid" on the New England Revolution? Who has the most followers? Who is even on Twitter? I grabbed the data from all the players listed on the Revs website has having a Twitter account. On 7/28 I took the amount of followers and compared them. Enjoy.

Before you check out the graph...which Revolution player do you think has the most Twitter followers? 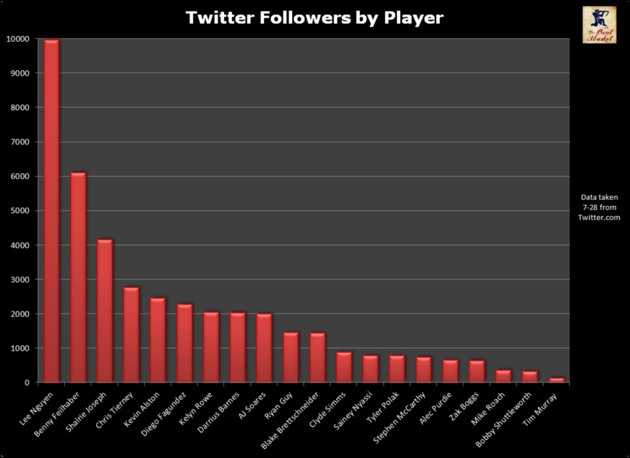 Reactions? Did you guess right?

What do you make of the results? Any big surprises? Are you going to give Tim Murray and Bobby Shuttleworth a pity follow?

Share your thoughts in the comment section below and keep an eye out for the The Bent Musket 2.0!