Juan Toja Arrives: How Will He Be Utilized?

Share All sharing options for: Juan Toja Arrives: How Will He Be Utilized?

The New England Revolution tweeted and later reported in their weekly update that Juan Toja joined the Revolution for his first training session since signing with the squad a couple weeks ago. The former MLS All-Star arrived in the States on Sunday and it looks like promising for him to be available on Saturday against D.C., unforeseen fitness issues notwithstanding.

Toja's arrival was mentioned on Monday's Far Post Podcast, where Jeff Lemieux and his compatriots also mentioned that the winger was not a full participant in practice. This is likely just a product of Toja lacking fitness and sharpness; presumably he hasn't officially trained with anybody in at least weeks, if not months.

The closer it comes to Toja's probable debut, the more we get to start considering what the Revs' attacking possibilities are with him in the lineup. His natural position is on the left wing, playing up high; he has, however, seen time in the middle, and according to Jay Heaps (through the Far Post Podcast, again), he can and/or has played on the right, too.

A look at Toja's skill set helps fill out the equation. Toja is quick, but more importantly he's tenacious and technically gifted. He's very left-footed, but that didn't seem to hurt him at all in his time in MLS, as he consistently showed an ability to beat defenders and both score and create chances off the dribble.

What makes him unique to the Revolution midfield, however, is his height and physical presence. At 6'1", Juan Toja is an aerial threat, and he's not at all afraid to mix it up with MLS defenders. This supports his ability to play through the middle, making late runs and crashing the box if the wide players start serving in crosses.

As it stands now, the players Toja will be competing with for time are probably Lee Nguyen, Benny Feilhaber, Kelyn Rowe, Ryan Guy, and Fernando Cardenas. If recent matches are any indication, the only player in that group whose spot is set in stone is Nguyen; Guy would probably be next on the list. After that, the recent benching of Feilhaber has muddied the waters a bit in terms of his place on the depth chart in relation to Rowe and Cardenas.

In light of that, let's focus on his ability to co-exist with a midfield already featuring Nguyen, with Clyde Simms the defensive anchor. It would seem most expedient to simply slot Toja in on the left. That allows you to shift Nguyen either out on the right or play him in the middle. If you move Nguyen wide, you leave the middle open for either Guy or Feilhaber, and Heaps has shown a recent preference for Guy. If you choose to keep Nguyen in a more central role, then again you can put Guy wide right (arguably his best position is on the wing), but Heaps has shown a greater propensity to try Rowe or even Feilhaber out wide. 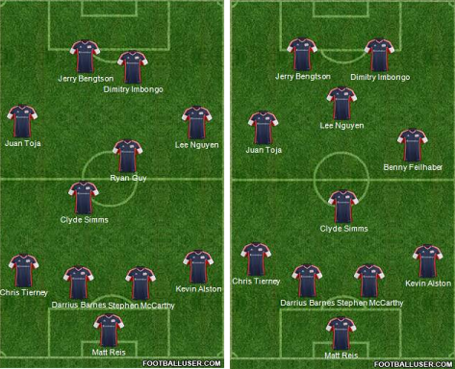 Also, putting Toja on the left gives him a chance to possibly link up with Chris Tierney on the overlap. Tierney's excellent understanding with Nguyen has been apparent all season, but what some people lose in that is the fact that Tierney has an excellent nose for getting forward, and could likely recreate that kind of synergy at some level with almost any other quality left winger. Frankly, with Toja's capabilities, that could be really exciting, and give Nguyen a chance to add his technical prowess to another section of the field that might sorely need it.

Nguyen, however, has played the majority of the season on the left. If Heaps figures that he doesn't want to disrupt Nguyen's rhythm, he could move Toja into the middle. If that happens, you have to figure that the 4-4-2 will look a lot less flat than it usually does with Guy or even Feilhaber in the team. Toja's not one-dimensional, but by all appearances he's definitely attack-first, which will mean a lot more for Simms to do as the holder and destroyer in front of the back four. In fact, the defensive implications might preclude Kelyn Rowe from getting a start, as he's shown a tendency to fall asleep on defense. Feilhaber and Guy both are better at tracking back and covering the gaps. 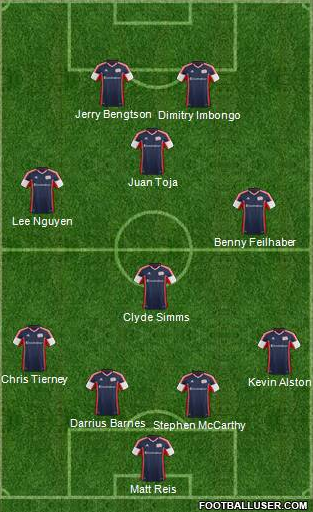 So what about the interesting prospect of Toja on the right? Honestly, it doesn't change much, except that it will be easier for the Revs to run the more flat four-man midfield with either Guy or Feilhaber. The major difference will be that Toja might be more inclined to cut inside on his left. That can create overlapping room for Kevin Alston (shudder) or Florian Lechner (if he starts, which I wouldn't count on), but it also gets Toja in the box. That, I think, would be the number-one benefit of having him on the right; again, his aerial prowess and finishing ability make him a legitimate scoring threat in the 18. That said, trying to encourage wingers to cut in is a tactic that hasn't worked out much for the Revs in the past. Perhaps it's a personnel issue, but regardless, the track record is not there. 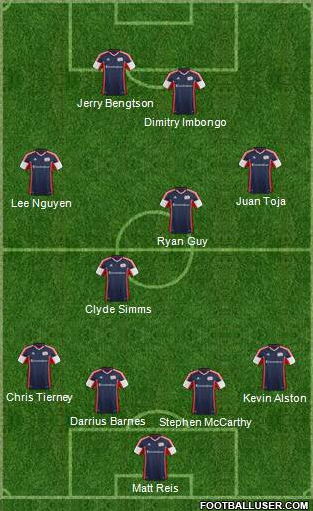 Obviously these aren't the only lineup possibilities, but it gives us a quick look at the implications of Juan Toja in this team. It really depends on what Jay Heaps wants out of Toja, and what Toja is able to do to maximize his own talents. If Toja can get into the box and get chances on the ball both with his feet and his head even when on the left, great. If Heaps thinks that having him hug a touchline and ping in crosses is the best use of his abilities, then the left is probably the best choice.

Perhaps he needs to be pulling the strings in the attack in the final third, or charging the box and scoring goals; the center is then his best bet. Or maybe disrupting the chemistry of the team with Nguyen on the left is something the Revs coaching staff is unwilling to do, and they think that having a left-footed threat on the right side gives New England an unexpected edge.

Any way it's sliced, it does appear that the era of Toja is set to begin, if not on Saturday, then next week. If he can replicate the kind of excitement and production that made him such a dangerous player for Dallas in 2007, he's a major win for this organization.

What do you think is the best way to use Toja? Vote in the poll and let us know in the comments!