So, I've basically been dreading writing this all day. But, it's time to own up and talk about it. Much like a bad hangover, sometimes you just need to get the hell up, make some coffee, take a shower, and deal with it. Because, you know what? You've got to move on. What's done is done.

I think there's two simple ways to look at this game. The first is the officiating. Now, it's easy to be the team on the wrong end of some calls and blame the end result on the refs. But, I mean, this one was pretty bad. That PK was straight up a bad call. Not only was Kevin Alston's challenge a soft one (all I saw was a tiny shirt tug), but it was outside of the box. 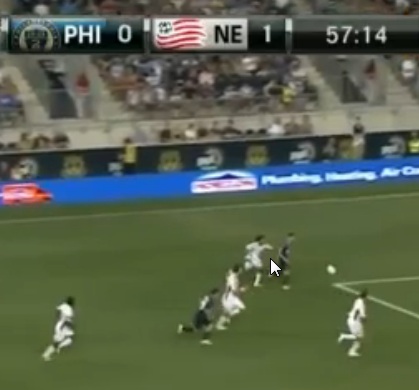 I know that's not the best image, but seriously THAT is what was called a PK. Go ahead, watch the replay. But hey, the refs get it wrong sometimes (in MLS perhaps too often). But, it of course wasn't just that. There were plenty of calls and non-calls (like the blatant hand-ball in the box by Sheanon Williams at 49') that completely took control of the game rather than either team. And that's just not how it should be.

But, look, I'm not going to sit here and complain about officiating. Because, the other way to look at this game is as simple as chalking it up as yet another typical Revs game. After all, it's the same stuff that plagues us each and every week--set pieces, lack of a clinical finish in the box, or, in this case, a late goal conceded by the Revs. It's not like we're finding new ways to lose.

If you know me, though, then you know that I've got some positives to take away from this match.

First of all, I was glad to see Kelyn Rowe make something happen. The rookie who had so much promise in pre-season has been a one-trick magician this season, and that trick is disappearing right before our eyes. He certainly did a little of that in this one, but he also broke free of like three defenders to get the ball to Saer Sene on his goal. THAT is the Kelyn Rowe we need to see more of.

Speaking of Sene, I think he had his best game yet at right wing. You saw him track back on defense and even put a ball or two into the box. But the dude has got to be sharper in the box. As a striker, he's got to get the confidence to put it away when the opportunity presents itself (and it presented itself PLENTY on Sunday night). I just don't think there are many excuses left for the Frenchman. One has to think he'll be looking at time on bench soon if he doesn't pull it together.

Some of the blame for this loss can also fall on Jay Heaps' substitute decisions, namely Dimitry Imbongo. The newcomer looked far from ready once he was sent out to replace Kelyn Rowe. He had his chances, but all were squandered. Now, I'll say this: it's still way too early to call Imbongo a bust. But, I for one would have preferred seeing someone like Diego Fagundez or even Fernando Cardenas get the call, someone who knows how to contribute to this type of situation. What I'm getting at is that Sunday night was no time to experiment with the Revs' newest you. And that's all I'll say on that.

Look, you can tell I'm still a little bitter over this one, so I'll wrap it up. Making the playoffs this year would have been really, really awesome. But, that's starting to seem less and less likely. In fact, head over to New England Soccer Today to read about just how unlikely it is. This season, though, is not a loss. There's still a chance. And even if we don't make the playoffs this year, I'm still really looking forward to seeing what else Jay Heaps has up his sleeves for the Revolution. Somehow, I still believe.