We can all agree that Twitter has a huge impact on the sports world. How does Major League Soccer and specifically New England Revolution compare to other clubs and other leagues?

Share All sharing options for: The Social Media Report: Introduction

Alright, I'm not going to take this post into an explanation on how valuable Twitter is. The real time ability for celebrities, companies, politicians and rebels alike to communicate with their fans and followers in mass has dramatically changed the way we consume news and content.

Major League Soccer is unique. The youngest of the major professional leagues, it does not have the luxury of its highlights or players being part of the daily rundown on Sportscenter or sports talk radio around the country. Information is hard to find and fans of the game have found creative ways to share it and consume insight, news and analysis. Social media was a huge component in accelerating that . A common platform like Twitter where you could literally to subscribe to the news and personalities you consider relevant allowed a user to tailor Twitter into a soccer news powerhouse.

I joined Twitter because of soccer, end of story. I am sure I am not the only one.

At the end of last year The Rebellion, one of the Revs' Supporters Groups put a survey out to their members to gather some information to better serve the growing group. I was involved in designing this survey and created a question to tell us where the majority of our supporters got their Revs information from. The options were Revolutionsoccer.net, the "#Revs" Twitter stream or local independent media. The replies broke down 30%, 33% and 33% respectively.

I was shocked at the amount of people rely on the community of people who operate in the #Revs feed to receive their news, opinion and analysis on the Revolution. There can be no doubt that an increased social media footprint would benefit any club. If someone can think of a way that it wouldn't benefit a club please share that with me.

So I got to wondering...how does the New England Revolution stack up to other MLS clubs on Twitter? How wide is their reach when they tweet? How does the official @MLS account match to the other leagues? What Revs player has the most Twitter followers?

I'm not sure it's going to prove anything...but it'll be fun to look at and discuss.

As a teaser of what some of the upcoming posts will look like, let's take a look at how we over here at The Bent Musket stack up against the other powerhouses in the #Revs Twitterverse. 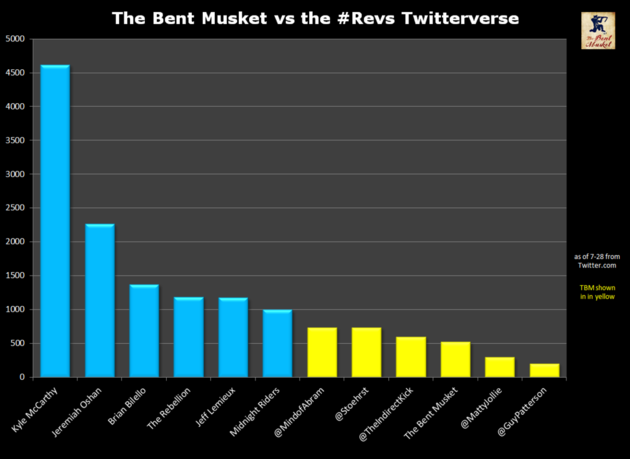