Share All sharing options for: Musket Rounds: UEFA Sucks, Euro 2012, USA vs. Antigua, Revs At The Emerald Lounge, And More

Happy Friday everybody, and welcome to the Musket Rounds! Today is (obviously) saturated with news related to Euro 2012 and tonight's USA vs. Antigua & Barbuda World Cup Qualifying match, but before we do anything I think there's a little something we can show you that's Revs-related.

The lead picture of this story is Lee Nguyen and A.J. Soares helping open the all-new Emerald Lounge at the Revere Hotel Boston Common. The story is pretty simple - two young, eligible bachelors from the New England Revolution made an appearance to run the all-female staff of a new nightclub and hotspot through some drills. At the risk of sounding crass, I think my choice of words there is fitting. But seriously, the Emerald Lounge looks like a pretty nice place and a good time, and it's cool that they decided to bring in A.J. and Lee to help promote Wednesday night's opening.

Revs working hard despite bye week - Boston New England Revolution Blog - ESPN Boston
Brian O'Connell went to training on Wednesday and caught up with Jay Heaps, Shalrie Joseph, and Stephen McCarthy, among others, to find out how things are going during the Revs' bye week.

Youth players invited to U.S. Soccer Training Center | New England Revolution
A bunch of academy players are getting a chance to attend US Soccer Training at Gillette next Wednesday. There are some recognizable names on this list, too. 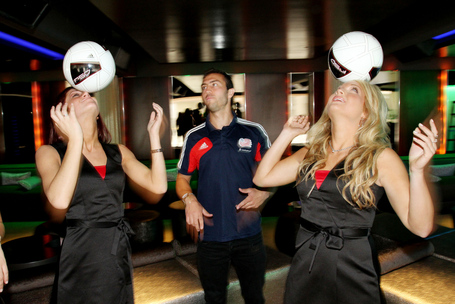 Mid-Day Ticker: Dempsey claims Fulham honor, Mathijsen sidelined and more - Soccer By Ives
Linking solely for the video of all 23 of Clint Dempsey's goals from this season. I love that we can all say we saw this first back when he was a Rev.

Anselmi, not Winter, should have been sacked today | The Footy Blog
Strong words from Richard Whittall on Winter's sacking and who is really to blame for TFC's woes. He's probably right. Everything I've heard about the MLSE ownership in Toronto is bad.

A 100-foot statue of ‘England savior Roy Hodgson’ that is visible from France | Dirty Tackle - Yahoo! Sports
This is why England never wins anything.

Netherlands players get racial abuse at training session before Euro 12 even starts, UEFA denies it | Dirty Tackle - Yahoo! Sports
Is it just because I'm American that UEFA and FIFA offend my sensibilities so incredibly? How do you just say "it didn't happen" and expect things to go smoothly?

A Football Report - If an octopus (RIP Paul) can do it, so can we: AFR's predictions for Euro 2012
I'm honestly only linking this because I like the title. I was going to shy away from Euro previews because they're EVERYWHERE but hey, the AFR guys are a nice bunch and any reference to Pulpo Paul is cool in my book.

From TSG Comments: Vintage or Ancient? On USMNT Player Age " The Shin Guardian
I stopped reading this halfway through, but not because it ain't interesting. Once again, Matthew and the TSG crew find something you never thought you wanted to read about, and then make it so that you can't imagine why no one ELSE is picking up on it.