I'm going to re-use a quote that we already had on the site earlier today, because I think it bears repeating. In the locker room after Saturday's match, Ryan Guy said, "I think it's great to be disappointed with a draw. I think last year we would have been satisfied with a draw, and this year we're absolutely not." And that there, for me, speaks volumes about what Jay Heaps has done to this club.

That being said, we're certainly not there yet-there's plenty of work still to be done. But, if you think back to the last couple seasons under Steve Nicol, I think it's pretty plain to see the difference in demeanor, energy, and morale, among other things. While Steve Nicol did a lot for the New England Revolution, Jay Heaps is leaving his own stamp on this club, and he's wasted no time getting to it.

Now, let's take a look back on Saturday's game. For starters, I think that the Revs' attack is really clicking. Saer Sene and Blake Brettschneider may not be MLS's most deadly duo up top, but I think that they've shown that they can compliment this New England midfield quite well. The midfield and forwards look to be on the same page more often than not, and you saw that in Saturday match.

What you didn't see, however, was the Revolution defense on that same page with them. Kevin Alston and Chris Tierney were just simply not effective on the wings against the Dynamo when they should be more involved so as to stretch the defense. What's perhaps worse, though, is the sloppiness defending in the last 10 minutes, which of course cost us a goal. In fact, on that last goal, you can see basically the whole back-line just ball watching, while Houston gets forward in numbers and is allowed time to create some options. Here's a couple snapshots I grabbed of that sequence: 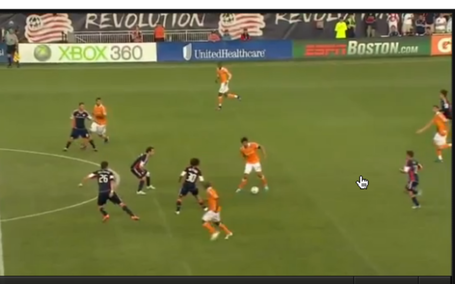 Here you can see Kevin Alston and A.J. Soares watching Brian Ching, waiting for him to make a move. McCarthy is watching the ball while also tracking back closer to goal. Chris Tierney, as you can see, is on his man. 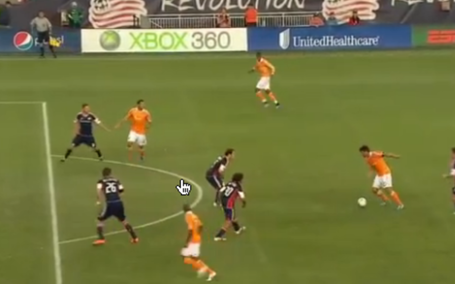 Here's Brian Ching looking up after controlling the pass to assess his options, of which he has a couple. He goes with the best choice, though, which is flipping the ball to Luiz Camargo, who nobody sees or even seems to be aware of. 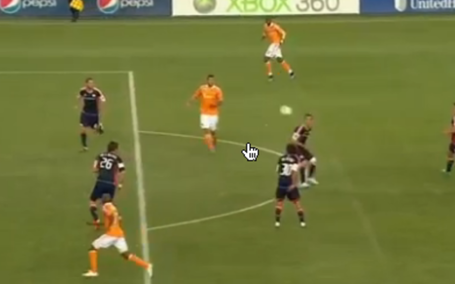 And here's Kevin Alston and Stephen McCarthy with their backs to Camargo, who is about to score the equalizer.

Now, it's easy to point fingers and place blame for this goal, but on the whole, I'd say the more important lesson to takeaway is that the Revs need to focus on their positioning and their shape for the full 90 minutes. Mental lapses like this are going to cost us time and time again, and we've seen it plenty of times so far this season. The defense has got to be more disciplined, particularly in the late stages of games. Let's hope that they can figure it out.

Oh, and don't even get me started on set pieces.

On the other side of the pitch, there's seems to be a lot of attention on Saer Sene after this weekend, who now has scored the 4th most goals in MLS this season. And he definitely deserves all the attention. I mean, you've got to admit, it's pretty nice having a player on the team who is causing a buzz and turning heads. But, at still such an early stage of the season, and indeed of his MLS career, can we really start drawing comparisons to Taylor Twellman? That i'm not so sure of. Sene is a hell of a lot better than a lot of the strikers who have come through Foxboro since Twellman's exit, but he has plenty still to work on. Yet still, at this rate, if he continues to progress like he has been, he may just be one of the big stories of the 2012 MLS season when it's all said and done. For a while I felt that Clyde Simms was the best off-season addition for the Revs this year, but now I'm starting to think it's Saer. We'll just have to see.

Speaking of Clyde Simms, his absence was quite clearly missed in this one. But, I do think Ryan Guy stepped in quite admirably to fill that void. After all, trying to replicate what Clyde Simms does for this team week in and week out is no easy task. But, as good as I think Ryan Guy was, I still would have organized the midfield a bit differently. The lineup that Heaps went with had me scratching my head quite a bit, as it seems so much more intuitive to play Guy on the right wing, Shalrie in the defensive midfield role, and Benny Feilhaber as the attacking midfielder. Maybe it is Heaps' insistence on keeping Benny at RM, i don't know, but I'd be interested to see that game again with the midfield shuffled around differently.

To wrap things up, I think that there are plenty of positives to take from this match, especially now that I've had some time to watch the highlights and reflect. But, for me, the defense is an issue. Maybe Darrius Barnes needs some more minutes. Or maybe Florian Lechner, whenever he returns from injury, will make a big impact. Or, hey, maybe we'll bring in someone great in the summer window (a defender or a striker to pair with Sene, perhaps?). Obviously I don't have the answer, but I hope there's one out there. I think that there is.