We receive a response to our email regarding the lack of Revolution signage on the "Home of" sign outside Gillette Stadium. It wasn't the response we were looking for.

In late March I threw a post up analyzing/complaining about the main sign on the outside of Gillette Stadium and its omission of the New England Revolution. Apparently, as the sign denotes, it's home to the New England Patriots only. Predictably, a healthy debate among fans raged in the comment section of the post about who within the Kraft ownership group really cares about soccer, or the Revs. At the end of the story I mentioned I was going to make a general inquiry using an electronic mail message to an address the Kraft Group provided on their website. The email was sent on 3/28 and a reply received on 4/9. See below. 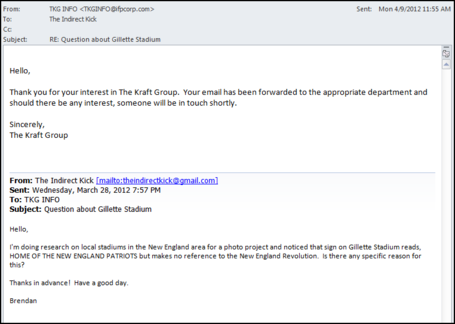 Now unless I'm crazy, you probably read that and repeated the sentence below sarcastically to yourself as you chuckled.

"should there be any interest, someone will be in touch shortly."

You're chuckling because you're not surprised and your assertions of the Kraft Group have been validated. It feels like they don't think they owe me a damn thing. I feel like a medieval jester, in that my failure to entertain or interest them will result in my execution.

Thinking more logically, this is most likely an automated response email and that info@thekraftgroup.com address and based on the response appears to be for partner relations more than general inquiries. I shall continue requesting information regarding my "photo project" for stadiums in the area. This time I will be using the contact form on the Gillette Stadium website. Stay tuned!