I can't sing the praises of this team's Saturday night performance enough. I would never have expected the Revs to just shake off an early Vancouver goal like it was nothing, answer immediately, and then pile on 3 more for the win. If you had told me that last year, I would have laughed in your face. This team showed a lot of resolve and a lot of confidence on and off the ball. Brilliant all around.

After Saturday, you've got to think that this starting XI is pretty damn close to the preferred XI for the 2012 Revs, save for maybe Blake Brettschnieder (who had a very respectable game, I should add). What I think is key to the success of this particular starting XI, in a 4-4-2, is Benny Feilhaber's comfort with and commitment to the right midfield position. And he took to the role fantastically this weekend. Benny, as we all know, prefers to play centrally. So, when he's put out wide, he has a tendency to pinch into the middle on the attack. What worked on Saturday was Saer Sene's ability to balance those runs of Feilhaber by way of drifting out a bit wider at times and just generally timing his runs accordingly to compliment what Benny was doing.

But, I should also point out that Benny did plenty of conventional RM work against Vancouver as well. In fact, if you take a look at Feilhaber's heat map (via MLSSoccer.com) from Saturday night below, you can see that he actually played the position very effectively: 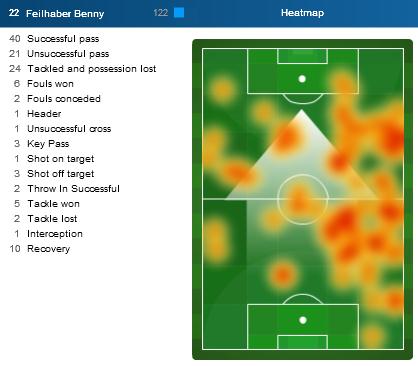 And here's his chalkboard from the match (also from MLSSoccer.com), which shows his possession, distribution, shots, and defensive efforts: 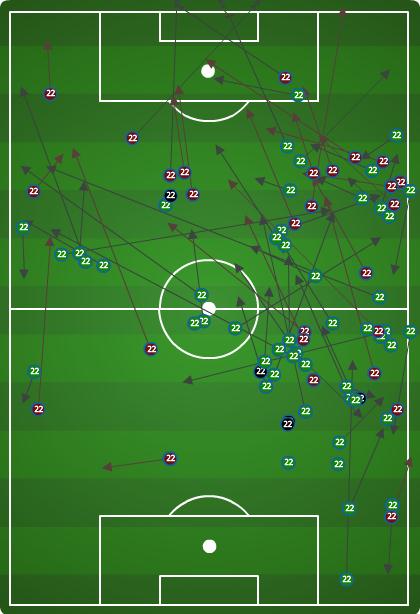 He was creative in the midfield but also very active on defense, which was an integral part of his dynamic performance and the overall New England victory, I would argue. Benny was also very clearly hungry for a goal of his own, but unfortunately it was not in the cards this weekend. I feel one coming very soon though.

Benny wasn't the only one with a great game. Stephen McCarthy put in perhaps his best performance yet, and seems to have proven that he should be the first choice CB to pair with A.J. Soares. For once, it was McCarthy with the big game and A.J. with the quieter game of the two. And the way that he got up in Omar Salgado's face when he was tackled in the box was just outstanding. Stephen McCarthy is no push over, and I think he showed Vancouver exactly that, and indeed everyone else.

I'm starting to really like the pairing of Saer Sene and Blake Brettschneider. Blake's jitters seem to have left him and he is playing with a lot more confidence and providing a lot more spark. He is making good runs and linking up well with his teammates. I'm not sold on him being an every week starter (I'll say it again, I still want to see Bjorn Runstrom get a start), but he is definitely growing on me.

Saer Sene showed us what he can do when he doesn't overthink his shots, and that's score goals. Sene tallied his fourth goal of the season, and it got me thinking about how his goals came about so far. The first 2 were headers from service into the box-no time to think about what to do, just make contact and point it at the net. The third goal was a quick one-touch volley from Stephen McCarthy's header into the box, from a corner kick. And then this one was a one-touch from Nguyen's through ball and a left-footed shot towards the far post. Compare those moments to the many times we've seen him dribbling in and around the box; not quite the same success. So, what am I getting at? Well, I'm thinking that Saer either needs to think less and play more naturally, or just dribble less and be more concise. Less time to think too much about a shot may just amount to more actual goals.

All in all, this was as pleasing of a game that I've watched the Revs play all season. I just hope that they can find a way to bottle this lightning and replicate it for the rest of the season. At the very least, this match should go a long way in adding to their confidence, their momentum, and their morale. Gosh, it sure is nice to feel excited about the Revs again.