Heaps vs Nicol: What Do The Stats Say?

Share All sharing options for: Heaps vs Nicol: What Do The Stats Say?

Shortly after accepting his new position at New England Revolution Head Coach, Jay Heaps expressed his desire to change the style of play completely. Heaps stressed a more attacking, better passing with a focus on maintaining possession. We're through six games of the 2012 season the New England Revolution find themselves with six points at a record of 2-4. At this point last year the Revs also had six points by way of 1-2-3 record.

Has there been any improvement?

Combing through the Opta match statistics on MLSsoccer.com's post game sections I gathered data focusing on the key indicators that would be Heaps' focus and sought to average that data over the first six games and compare it to 2011 Revs. Now granted stats can be taken out of context to prove anything; for example we're 0-3 when Benny Feilhaber plays. Does that mean we should bench Benny, no absolutely not. I think data trended over the length season has enough data points to tell a story. We have 6 games so far and I thought it'd be interesting to compare and contrast the two squads at this point in the season.

Here are the stat categories I chose to analyze and why.

Let's take a look at how Nicol's squad compares to this year's under Heaps. 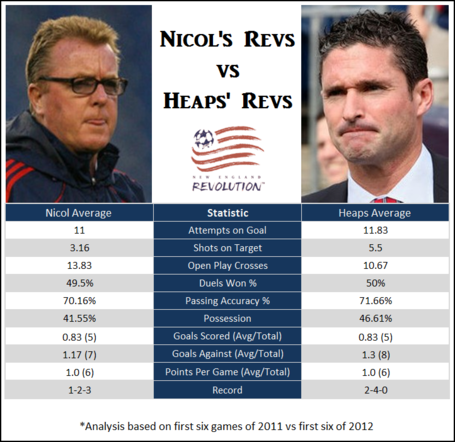 Essentially, the two teams aren't that different, although in many key categories Heaps has made incremental improvements. The biggest improvements coming from shots on target and possession which marry up with his increased focus on possession-oriented, attacking soccer. Unfortunately these improvements have yielded the same results in terms of goals score and goals allowed leading to both teams sitting at 6 points after 6 games.
Now anyone that watched these two teams will tell you immediately that this year's team is visibly better on the field. Unfortunately, there aren't stat categories to measure work rate, creativity and off the ball movement. With the exception of the 3-0 loss to Sporting KC in which the Revs played down a man for nearly 80 minutes, Heaps' squad has rarely been rolled over. In our four losses you can argue that the Revs deserved a point in some games whereas last year we were lucky to "steal" a point in many matches. Stealing means you take something you didn't earn or deserve.
It appears six games is not enough data to accurately compare the two teams. Variations involving injuries, schedules most likely skew this data set. We'll revisit this comparison halfway through the season and again at the end and try to make sense of it all. Data trended over an extended period of time won't lie. Come this Fall we'll see if Heaps is successful in achieving his preseason goals.
Share your thoughts below.